The Evillious Chronicles Wiki
Register
Don't have an account?
Sign In
Advertisement
in: Characters, Humans, Venom Mercenaries,
and 6 more
English

Zusco was a member of the Venom Mercenaries and the younger brother of Yarera. Joining the legendary Gast Venom as part of his mercenary army, Yarera was hired by the Lucifenian Royal Palace as an extra soldier in the wake of political unrest within the Kingdom of Lucifenia. Raping and pillaging as they pleased, he and his brother unintentionally sparked the Lucifenian Revolution.

Born in Asmodean sometime during the 5th century EC, Zusco and his older brother Yarera grew up as warriors, Zusco learning swordplay and and a special technique to travel by wire.[1] The two eventually joined the traveling Venom Mercenaries and worked under the group's leader, Gast Venom. Causing mayhem wherever they went, the brothers and their group became infamous across the Evillious region.[2]

"Listen up, we're the soldiers protecting this country! To take money from ones as great as us... Don't you think it's presumptuous?"
"It's as my big brother Yarera says! Rather, you should be telling us our money's no good here and to come over every day!"
―Yarera and Zusco[src]

In EC 500, Yarera and Zusco accompanied Gast during his visit to Keel Freezis at his mansion in Elphegort to negotiate buying the Venom Sword he desired. Instructed by their head to wait outside the premises, the two eventually got bored of waiting and entered the main gates to meet with him, seeing him come back empty handed. After being chastised for not waiting, the two learned that Keel had refused to sell the sword and, at Gast's command, followed him off the mansion's premises.[3]

Later that year, the Venom Mercenaries were hired by the Kingdom of Lucifenia to make up for its shortage of domestic troops during the Lucifenia-Elphegort War. Zusco with Yarera took up posts in Rolled and were among the rest of the mercenaries who raped and pillaged as they pleased under the royal palace's authority. One day, they visited a tavern in Milanais Square and drank heavily, entering into an argument with the tavern owner over paying their tab. After Yarera kicked the man in the stomach, Zusco left with his brother, satisfied and not paying.

The two later returned to the tavern on another day, noting how crowded it was this time. After becoming drunk once more, Zusco began sexually harassing a nearby waitress, ignoring her pleas. He was suddenly interrupted by a one-eyed man, who kicked him in the face; seeing a woman attack Yarera, Zusco fled and brought six other mercenaries back with him into the tavern. Zusco, Yarera, and the other mercenaries were then overwhelmed by all the other patrons in the bar, tied up, and brought outside.

There they witnessed the woman, Germaine Avadonia, announce the start of their revolution before the crowd in Milanais Square. Shortly after, the revolutionaries threw Zusco and his brother into the Orgo River along with the other mercenaries.[2]

"Was I your objective from the beginning?"
"Yeah. We'll get a big payout if we take you in. And then it's bye-bye to this ill-fitting pirate life!"
―King Kyle and Zusco[src]

After surviving the ordeal, Zusco became Yarera's second when his brother became the captain of a pirate crew, and the two led the "Yarera Pirates" in plundering the Hark Sea. In EC 505, the two were offered a substantial amount of money by Abyss I.R. to abduct a blue-haired man voyaging to Marlon. Seeing the money as their chance to get out of piracy, the former mercenaries accepted and the pirate band set out in six ships for the Royal Victoricia.

Approaching the Marlon vessel and assuming it was a merchant ship, the pirates fired their cannons at the Royal Victoricia and continued to approach even as the vessel sank their other ships one by one. After ramming into the side of the Royal Victoricia, Zusco seconded his brother's declaration of their commandeering of the ship; as, in response, sailors from the Royal Victoricia boarded their vessel, they dispatched their enemies before Zusco took them both onto the enemy ship with his wire glove.

Once onboard, Zusco noted as Yarera identified their quarry; while his brother dispatched the Admiral of the ship, Zusco came behind their target, Kyle Marlon, and secured him as a hostage with a knife to his neck. He then waited as Yarera ordered the sailors to return to their own ship, confirming for Kyle that he had been their objective from the start. The pirate was then distracted by a girl coming on deck, and then a woman in red clothes throwing up by the mast; thus distracted, his former hostage escaped and Zusco returned to Yarera's side, recognizing the woman as Germaine Avadonia.

Hoping to take revenge on the woman for before, Zusco and Yarera prepared to do battle with her and Kyle, approaching and beginning to duel them. However, as Germaine and her ally began to succeed in the struggle and their subordinate pirates were captured, Zusco urged his brother to flee and used his wire glove to launch them both back to their own ship, abandoning their crew. They then began to sail away from the Royal Victoricia; as they gloated about their escape, the vessel was attacked and pulled under by a giant Ziz Tiama Octopus , killing the brothers.[1]

After his deaths, Zusco's soul was sent to the Heavenly Yard and remained there. In EC 999, he and the other souls were pulled back to the Third Period as the ground world merged with the Hellish Yard.[4] Afterward, the two were invited to a dinner party at the Lucifenian Royal Palace held in Princess Riliane's honor and joined the other guests in the Hall of Mirrors. Later during the festivities, Zusco saw his brother collapse and frantically called out to him.[5]

Shortly after their deaths, the giant Ziz Tiama that sank their ship was defeated by the Royal Victoricia.[1] Later during the century, Zusco's nephew by Yarera named his son after Zusco, who later passed on the name to his secondborn son while passing on Yarera's name to his firstborn. Zusco Jr. and Yarera III later became booze-loving thugs like their namesakes, eventually attempting to kidnap the affluent Lemy Abelard in EC 606.[6]

The Yarera Bloodline eventually established themselves as prominent businessman on the world stage, the Yarera-Zusco Firm they created going on to compete with and almost eclipse the Freezis Foundation.[7] An adopted member of the family, named Jorm Zusco was infected with HER and became an infamous and dangerous serial killer.[8]

Holding no regard for the well-being of anyone but himself and his brother, Zusco was a cruel and impatient man and as a mercenary became a blight on the Lucifenian populace. Regularly taking to drink, the man would become unscrupulous once drunk, freely giving in to his lecherous urges around women despite the discomfort of the other party. As his brother' subordinate, Zusco regularly deferred to him rather than act on his own initiative and often repeated his sayings.

As a pirate, Zusco continued to unscrupulously attack innocents for food and money, as well as holding no sense of responsibility towards his brother's crew members. Despite his later choice of work, he with Yarera shared a desire to get out of the pirate trade and would go to great lengths to get the money to do so. He also felt squeamish about disgusting things, such as vomit, to the point of distraction.

Trained in assassin techniques from a young age, Zusco was a capable swordsman and able to quickly dispatch his foes, making him valuable as a mercenary and notable as a pirate's second. He was also skilled at moving stealthily, able to sneak up behind an opponent without their realizing. Similarly, Zusco was skilled in transporting himself and his brother using his wire glove, having both good aim and skills in acrobatics. As well as this, he had the additional talent in adapting quickly to his circumstances.

Despite this, Zusco was easily overwhelmed by more skilled swordsmen and usually relied on his brother or fellow mercenaries, rarely taking on an opponent by himself. As a pirate, he also accompanied his brother in making amateur mistakes and was slow witted, deceived easily by Abyss I.R.

Yarera: Zusco's older brother. Zusco was always subordinate to his brother and seconded all his efforts, the two of them sharing a close sibling relationship. Complimenting Yarera's strength with his stealth and acrobatics, Zusco acted as a useful partner to Yarera during his battles.

Gast Venom: Zusco's superior in the Venom Mercenaries. Although content to follow Gast's direction whenever he gave it, Zusco with Yarera took a laxed approach towards following Gast and didn't show him any particular respect.

Germaine Avadonia: Zusco's opponent. After their humiliation and near-death at Germaine's hands at the start of the Lucifenian Revolution, Zusco and Yarera both harbored a desire for revenge against the revolutionary leader and so became enraged to see her once again. 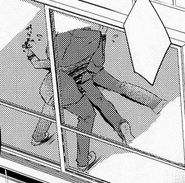