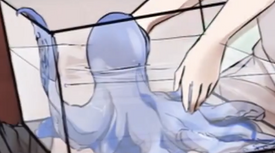 The Ziz Tiama[note 1], also known as the Aotako[note 2], was a type of octopus native to the Hark Sea. Originally used for sacrificial purposes by the people of Magic Kingdom Levianta, its use as a magic tool later declined over the centuries.

At some point, the ziz tiama was discovered by the people of Magic Kingdom Levianta and began being fished. Widely used as sacrificial offerings to the gods,[1] the ziz tiama's population was eventually reduced by around 70%. Following the Magic Kingdom's destruction in the Levianta Catastrophe in EC 013, sacrificial use of ziz tiamas greatly declined. In EC 126, Elluka Clockworker sacrificed a ziz tiama at the mountain range nearby Mystica, Beelzenia, conjuring a storm that lasted for days and leaving a permanent mist in the area.[1]

Around the turn of the 4th century EC, the Marlon Royal Family discovered the use of ziz tiama ink to make a healing elixir, brewing it for Prince Carlos Marlon.[2] At some point, Elluka sacrificed a ziz tiama to alleviate the drought in a Beelzenian province.[3] In EC 500, Elluka sacrificed a baby ziz tiama to quell the fire in Held's Forest during the Green Hunting.[4] Five years later, Irina Clockworker transformed a ziz tiama into a gigantic monster and had it attack the royal flagship of King Kyle Marlon in an attempt to thwart his voyage to Marlon.[5]

When sacrificed to the gods in a prayer ritual, the ziz tiama could be used to summon rainstorms.[4] The size of these rainstorms depended on the ziz tiama's maturity, with baby ziz tiamas resulting in heavy storms that lasted a whole day and grown ones causing more powerful and long-lasting downpours.[1] Aside from this, its ink could be used to formulate a healing elixir when mixed with shavings from Grim the End.[2] Ziz tiamas could also be transformed into a large, kraken-like monsters by powerful mages; in their transformed state, the octopi could attack and wreck ships passing by the waters they resided in.[6]

Retrieved from "https://theevilliouschronicles.fandom.com/wiki/Ziz_Tiama?oldid=185987"
Community content is available under CC-BY-SA unless otherwise noted.