The Evillious Chronicles Wiki
Register
Don't have an account?
Sign In
Advertisement
in: Events, Asmodean, Beelzenia,
and 7 more
English 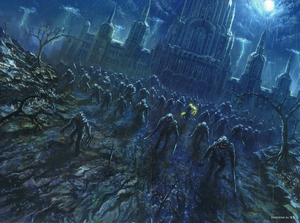 The War of 505 refers to the conflict between the Kingdom of Marlon, Beelzenian Empire, and Asmodean in the titular year EC 505. After years of growing tension between Marlon and its neighbors, fighting broke out across the region as a pretext for the expansion of Marlon's imperialist regime.

"Do you plan to unite the entire Evillious region?"
"Eventually, yes."
―General George and King Kyle[src]

Following the revolution in the Kingdom of Lucifenia in December of EC 500, the territory was occupied by the Marlon military by decree of its king, Kyle Marlon, to serve as a temporary government for the weakened country.[1] Three months later, Kyle declared the Witch Hunting Order on the leader of the Lucifenian Resistance, Germaine Avadonia, and attempted to eradicate its members from the false government. The former revolutionaries opposed Kyle's policies and the conflict was exacerbated when Lucifenia was annexed as part of Marlon. Declared enemies of the state, fighting broke out throughout EC 501 as the Resistance maintained Breck Mountain as its base of operations.

In EC 502, the former revolutionaries captured Retasan Fortress and held it during the struggle with the Marlon army.[2] After the former Lucifenian court mage, Elluka Clockworker and her apprentice Gumillia were discovered to be spying on the Lucifenian Royal Palace the following year, their names were added to the Witch Hunt list. Enforcing his Witch Hunt, Kyle petitioned his mother, Queen Dowager Prim, for aid with her Special Maneuvers Task Force and she complied. Per Prim's conditions, the task force was given absolute authority over the matter and names continued to be added throughout the period.

In EC 503, General Riliane Mouchet and her forces recaptured Breck Mountain and Retasan Fortress for the Kingdom of Marlon and the resistance retreated to the Beelzenian Empire. Marlon immediately ordered Beelzenia to surrender the troops, but the Emperor, under advisement of Gumillia, refused to cooperate and harbored the "criminals".[3] In response, Riliane Mouchet's forces were stationed at Retasan in preparation for potential conflict and traffic between countries became increasingly restricted as the threat of war loomed overhead.[4] The Lucifenian Resistance was incorporated into Beelzenia's army and stationed along the border in case of invasion; in EC 504, Chartette Langley and Germaine Avadonia entered Beelzenia and the former was appointed captain of the Resistance, dubbed the Langley Unit.[3]

"That's why! I came here to announce an end to the armistice!"
―Head of Espionage Ney Phutapie[src]

In EC 505, the Captain of the Special Maneuvers Task Force, Ney Phutapie, was appointed the new commander of Retasan Fortress; after Ney and her task force arrived at the fortress and took over General Riliane's command, the captain personally infiltrated Beelzenia over two weeks later, killing the border guards. At a nearby cemetery within the country, Ney raised an army of corpse soldiers, using the undead former Emperor as the legion's commander.

With her undead hordes, Ney officially declared the armistice between Marlon and Beelzenia annulled and directed her troops in an assault on Rucolebeni, as well as other areas in the region. Beelzenian soldiers were quickly deployed to combat the sudden threat but were quickly overwhelmed and forced to retreat. In response, the Emperor of Beelzenia declared a state of emergency and put the Imperial City on lockdown while the army was redeployed to defend the Empire's territories.[5]

Over the next three days, the Langley Unit attempted to eradicate the corpse soldiers in Rucolebeni. During the course of the assault, Riliane Mouchet defected and fled Retasan, defeating the former Emperor commanding the undead army and bringing its head to the Beelzenian Emperor. After meeting with the former Retasan commander, the Emperor promised her protection in exchange for the information she supplied; after meeting with his military commanders and advisers, the Emperor ordered the main army of twenty thousand soldiers to be divided into four groups of five thousand strong each along the front lines that night.[6]

"But from here on out, war is going to break out for real."
"Really?"
"Yeah. Seems the emperor's made up his mind. He's said he's going to launch an invasion on Retasan in a day or two."
―Riliane Mouchet and Yukina Freezis[src]

The next morning, three of the forces launched a three-pronged assault on Retasan Fortress while the remaining units were held in reserve. After about three weeks of fighting between the Beelzenian army and Retasan forces, Asmodean forces invaded the Lucifenia territory and forces led by General George Ausdin were immediately dispatched to defend against the invaders.

Around a week later, the three Beelzenian forces lay siege to the fortress and Captain Ney immediately requested reinforcements. Denied assistance from most of the surrounding generals, three thousand soldiers arrived to reinforce the original five thousand troops stationed at Retasan. Entangled into fighting, the Retasan and Beelzenian forces were locked into a stalemate. Following Germaine Avadonia's advice, the Beelzenian army had the Langley, Baggio, and Catalini units stage nightly raids on the fortress, spreading false information and putting the Retasan defenders in disarray.

During the period, Captain Ney began bringing in dead soldiers into the fortress to bolster defenses, causing the terrified troops to fall into further chaos. Routing the Retasan forces within three days, the Beelzenian army captured the periphery fortress regions and began pushing the defenders out of the city center and urban areas; during the fighting, Ney and the Special Maneuvers Task Force fled. Around this time, General George Ausdin's force suppressed the Asmodean assault and forced their retreat. Within a few days, Beelzenia completely captured Retasan.[6]

After the defeat at Retasan, General George Ausdin and a force of twenty thousand soldiers led an assault to defend the Lucifenia-Beelzenia border, rallying the other generals and their forces in preparation to recapture the fortress and begin another invasion of Beelzenia.[7] After the two forces engaged for about a month, King Kyle and the Beelzenian Emperor signed a new peace treaty and the fighting officially ended.[8]

After the war was put to an end, King Kyle launched an assault on Marlon's Blood Pool region weeks later to put down dead soldier forces rampaging across the area and recaptured Castle Hedgehog from his mother. Lucifenia's former sovereignty was restored by Kyle five years later and it became an independent republic, halting Marlon's imperialist policies. Kyle abdicated the throne to his half-brother, Arkatoir, afterward.[9]

"Good grief, can't these people stop recklessly starting wars for their own interests?! It's obvious this criminal is just an excuse to expand their territory!"
―Yukina Freezis[src]

Aside from the Lucifenian Resistance, many among the former Lucifenian military expressed disapproval over Marlon's imperialist policies both before and during the war,[4] in some cases this resulted in defections from within the ranks.[7] As such, the Beelzenian front suffered greatly from chaos among the troops and fear of the undead soldiers conjured as their reinforcements.[5] Although at first effective in striking terror among the citizens, the reanimated warriors were soon brushed off as a much more minor threat once a means to combat them was discovered.

The citizens of Retasan expressed dissatisfaction with their constant change in government as the area became more and more heavily contested during the war.[6] Kyle's abdication was thus seen by many as, partially, a result of his tyranny; many of the events during and directly following the war were left unknown to the general public.[10] Due to the conflict, Beelzenia experienced increased resentment towards Marlon, tensions building between the two countries for some time.