Waltz of Evil: The Deadly Sins of Evil Guidebook

It began with a novel series based on the musical works of The Daughter of Evil, The Servant of Evil, and the Seven Deadly Sins Series. Each song has a connection, set in the Bolganio region at various times, unfolding as a grand historical tale by various people. It started with Moonlit Bear and Chrono Story of Original Sin, The Daughter of Evil of Pride, Evil Food Eater Conchita of Gluttony, The Tailor of Enbizaka of Envy, The Lunacy of Duke Venomania of Lust, Judgment of Corruption of Greed, Gift from the Princess who Brought Sleep of Sloth, and the not yet revealed Wrath. The unfortunate fate of those involved with the Seven Deadly Sins is spun. As of 2013, following The Daughter of Evil novel series, both The Lunacy of Duke Venomania and Evil Food Eater Conchita have been released as part of Deadly Sins of Evil. In this book, the Moonlit Bear illustrated story, Tale of Abandonment on a Moonlit Night illustration story, the Judgment of Corruption Side Story: Gallerian manga, and a Deadly Sins of Evil short story written by the creator himself, Akuno-P, are compiled together.

Moonlit Bear is the first short, illustrative story included in the databook. It follows the events of the song of the same name as a woman steals two fruit from a vicious bear on a moonlit night. The story was illustrated by Yoshida Dondorian. It was included as the only short story with colored illustrations, preceding a variety of other colored illustrations by various artists and the guidebook's index.

An Evillious Chronicles timeline lists the major events that occur in the overarching story, adding the cover illustrations of all the light novels released up until that point adjacent to the area relevant to the timeline. Afterwards, a chronological guide of all of mothy's songs in the Evillious series up until that point is listed in chronological order. Each song is given a story summary and brief explanation of its place in the series with comments from Akuno-P. Finally, a brief description is given for four major album releases by mothy: Evils Forest, Evils Court, Original Sin Story -Act 1-, and its complementary -Act 2-.

Tale of Abandonment on a Moonlit Night[]

Main Article: Tale of Abandonment on a Moonlit Night (story)

Tale of Abandonment on a Moonlit Night is the second short, illustrative story included in the databook. It follows the events of the song of the same name, adding more context to the supernatural elements of the story while retelling the song's original events. It was illustrated by Mizutame Tori.

Deadly Sins of Evil is a collection of yonkoma manga parodying the events of the Seven Deadly Sins Series with outrageous portrayals of the characters and their actions from various other media. It was written by HR (SHDX) and illustrated by Tamara. The manga was preceded by a page giving a brief description of each vessel of sin in the series.

Heavenly Yard is the third short story included in the databook. It elaborates on the creation of the world Bolganio is set in while also explaining several details regarding the overall story from the perspective of Sickle, the god that created the world. It was written by Akuno-P.

Judgment of Corruption Side Story: Gallerian[]

Judgment of Corruption Side Story: Gallerian is the final short story included in the databook. It covers an event with Chief Justice Gallerian Marlon and demonstrates his corruption in the Dark Star Bureau to achieve his goals. The manga was written by JK (SHDX) and illustrated by Masahiro Ikeno.

The end of the guidebook provides a small interview with mothy on some general questions about the series and its characters, such as Ma, as well as specific questions geared towards the previous two Deadly Sins of Evil light novels. Following that, an interview with Ichika regarding the upcoming manga adaptation of The Daughter of Evil series discussed the origin and evolution of the manga, including teaser illustrations and concept art for the setting and characters in the first volume. 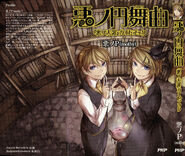 The front cover of the Guidebook 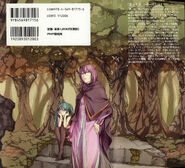 The back cover of the Guidebook

Kayo Sudou and her three victims

The Master of the Court in Evil's Theater

Meta Salmhofer with her children at the Levianta Royal Institute

Sample of the guidebook and front of the illustration card 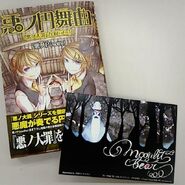 Sample of the guidebook and back of the illustration card

Advertisement for the databook