For the other Demon of Gluttony, see Banica Conchita.

"Take “food" from you, and what would you say is left?"
―Vlad Tuberci[src]

Vlad Tuberci, later known as the Demon of Gluttony, was an earthling from the Second Period and later one of the Demons of Sin. As part of the team on the Climb One who intended to repopulate a new planet with human beings, Vlad became involved in the creation of the Third Period before being trapped on the ship and later reincarnated as a demon.

In the Second Period, Vlad became a biotechnology researcher with his cousin, Eater Sabella, as his assistant.[1] As the Second Period began to collapse due to HERs contaminating the world, Vlad and 71 other scientists boarded one of several spaceships intended to travel to inhabitable planets and repopulate them, theirs under the name Climb One. As they lost contact with all their fellow spaceships, the crew of the Climb One realized they were the last inhabitants of Earth and decided to create a new species in the image of earthlings.

After finding a new planet to inhabit, they set about constructing the new world and species. During this process Seth Twiright, an HER who had secretly boarded the Climb One, instigated the deaths of 62 of the crew members and contaminated the new species to have a possibility of developing HER Syndrome. The remaining crew, including Vlad, proposed they reincarnate as gods into the world to guide the humans, unaware that they themselves were HERs.

When their colleagues Held Yggdra and Luna Hazuki disagreed, Vlad joined the ensuing fight and was killed along with everyone else when it caused the Climb One to crash, leaving behind only his spirit data. Vlad and his colleagues remained trapped in the Climb One for some time while the new species of humans began building their societies; eventually, the humans of Levianta discovered the Climb One and established it as a holy relic called the "Sin" ark.[2]

Later on, Vlad escaped the ark along with his fellow earthlings. Reincarnated as a demon as part of Hänsel and Gretel's Re_birthday in EC 014,[3] Vlad became the "Demon of Gluttony" inhabiting a red wine glass and lost all memories of his former life.[4] Afterwards, the demons and their vessels of sin were scattered across the world,[5] armed with the knowledge of the sun god's rules for demons.[6]

Sometime during the first century EC, the demon invoked its powers to resurrect the dead.[7] Around the turn of the third century EC, the glass ended up in the stomach of a baemu pig and the Demon of Gluttony infused the beast with its pathogen. After the pig was captured and eaten in the village of Gula, the demon unleashed its deadly epidemic upon the afflicted and the villagers began to die off at an increasing rate each day over the course of ten years until only a single villager survived.[8]

"Do you want to know? –To know of a world of new, extreme "food" that you've never seen?"
―The Demon tempting Banica[src]

Around a hundred years later, the glass ended up in the stomach of another baemu and the demon similarly infused it with its magical disease. After the pig was eaten by Duke Muzuri Conchita and his entire household in November of EC 296, the demon unleashed the plague again, killing off one person from the staff per day. Less than a week later, the mage AB-CIR removed the glass from the premises, leaving the demon helpless to empower its plague any further.

At the end of its pathogen's ten year period at the Conchita household, it had killed off everyone in the mansion save for Banica Conchita, Muzuri, and Ron Grapple, with Duke Muzuri having killed Megour Conchita after she attempted to eat the corpses of their staff in March of EC 306.[8] Some time during this, AB-CIR was caught and forced to relinquish the glass in Marlon. When Banica went to Marlon following her engagement to Prince Carlos Marlon, the glass was shown during the banquet and triggered an attack in the traumatized Banica, ruining the engagement.

Sometime after, the vessel ended up in the possession of Arte and Pollo, the demon noticing the two were reincarnations of Hänsel and Gretel. The demon's glass was stored in the twins' room at the Conchita Mansion. In EC 323, the Demon learned that Muzuri's daughter Banica was dying due to her eating obsession and approached her, manifesting itself to offer her a contract. As Banica made clear she was at peace with dying, having tasted nearly all the world's foods, he tempted her to contract so that she could taste the "ultimate food" as well.

Although Banica was reluctant in memory of what he had done to her household, the demon goaded her until she sent it away, leaving behind its vessel filled with Blood Grave wine. The next morning, Banica drank the wine, confirming the contract with the Demon; possessing her, the Demon of Gluttony slimmed her figure and cured her of her illness, as well as making her be able to eat anything she desired.[9] Over the next three years, the demon observed its host gorge herself on the most disgusting of foods, eventually deserting her duties to further indulge in her obsession. Banica also used the demon's power from the glass to reanimate the mansion's dead staff to guard the estate.[10]

"You’re suffering from hunger, aren’t you? But even if you search around here—no, even if you search throughout the entire world, there is nothing you can eat that will satisfy you! Except for this child!"
―The Demon's desperation[src]

In EC 325, Banica completely descended into cannibalizing her servants before unleashing the undead across her territory. After she was poisoned by her cook Carlos Marlon, the Demon of Gluttony was affected only a little by the Demon of Wrath's magic infusing the soup; when she ate her cook outright, however, the demon was slowly weakened by the Wrath magic in Carlos' body, as Carlos had regularly been ingesting it for years.

In August of EC 325, the demon watched as the starving Banica approached her baby she had with Carlos, which the demon realized he could use to cure himself. As Banica hesitated to eat the baby, the demon manifested itself as a red mist and began insisting she eat the boy, explaining the situation and how the boy produced a "vaccine" that would counteract the Wrath magic.

Questioned by Banica, the demon also explained Arte and Pollo's true nature as reincarnations before continuing to encourage Banica to eat the baby. As Banica refused to eat her own child, the demon began to argue with her and exert more power over her, becoming increasingly desperate. In the end, to the demon's horror, Banica devoured her own body instead, eating the demon along with it.[11]

Following the defeat of Ma in EC 1000, Vlad somehow escaped Banica's stomach. Manifesting as a pig, he was played with by the twins Arte and Pollo as they returned to the Lucifenian Royal Palace from the Grave Yard. Encountering Lich, Vlad directed him to Banica, who was in the theater's belfry.[12]

A heavily stylized account of Vlad's participation in the Third Period's creation was noted in the Levin Bible, with Vlad being one of the six "god kin" who swore allegiance to Levia-Behemo against the "Sun God";[13] Lich Arklow also thought of using Vlad's familial relationship with Eater as a way of restoring his memories.[14] Vlad's actions as the Demon of Gluttony sparked chaos and tragedy throughout the history of the Third Period.

"Are you touched by emotion? Good grief—you’re so trivial. You really are a worthless fool!"
―Vlad intimidating Banica[src]

Acting like an HER, Vlad was a morally corruptible man. During the creation of the Third Period, he and his colleagues became willing to kill in order to achieve their objectives, and as a Demon of Sin Vlad became rampaging, apathetic, and gluttonous, having no goals but to sow chaos in the Third Period. Similarly, he was noted as being a glutton before his incarnation into a demon.[2]

As a Demon of Sin, the Demon of Gluttony was able to possess those who wielded its vessel; while possessing a host, it was able to influence their personality and actions, fueling their appetite.[11] If a contract was forged, it would also grant them access to its powers, including being able to heal at an advanced rate, consume and enjoy anything no matter how inedible or poisonous, and conjure the Gula pathogen and reanimate those killed by it.[15] If the host gave birth while possessed by the Demon, it was possible to pass the healing ability to their descendants.[16] Despite its abilities, the Demon of Gluttony was subject to the "rules" of the Third Period,[6] as well as vulnerable to being inhibited by a sealing spell.[17]

Banica Conchita: A woman the Demon possessed. Seeing the gluttonous Duke as a suitable contractor, the demon was persistent with obtaining her consent to becoming possessed and was satisfied with the Duke sating her appetite while under its power. After becoming weakened by the Golden Key and seeing the Duke refuse to eat its one hope of survival, the demon became antagonistic and aggressive towards Banica and panicked at the realization she planned to devour it.

Eve Moonlit: The Demon's creator and, later, fellow Demon. Although born from Eve's body, the Demon made little mention of its connection to Eve. The Demon looked down on her for not bothering to possess or forge contracts with potential hosts.

Hänsel: An individual that interacted with the Demon of Gluttony. Due to Hänsel being one of the causes of its creation, the Demon held knowledge of the boy and knew the true nature his reincarnations, such as Pollo.

Gretel: An individual that interacted with the Demon of Gluttony. Due to Gretel being one of the causes of its creation, the Demon held knowledge of the girl and knew the true nature her reincarnations, such as Arte.

Seth Twiright: A fellow Demon. The Demon of Gluttony had knowledge of the Demon of Wrath and the effects of its magic on it; it also knew methods to reverse the effects if the possibility presented itself.

Marie Annette: A fellow Demon. The Demon of Gluttony looked down on it for taking hosts by force and possessing anyone it wanted to.

Eater Sabella: Vlad's cousin. Aside from their familial connection, Vlad saw Eater as a suitable research assistant during his work in the Second Period.

Luna Hazuki: A fellow earthling. Although originally fine with working with Hazuki as a colleague, Vlad became resentful of her philosophy to let the humans work things out for themselves and caused chaos in the Third Period because of this.

The Demon of Gluttony in the Deadly Sins of Evil manga

The Demon of Gluttony in Quartets of Evil

The Demon of Gluttony on the back cover of Seven Crimes and Punishments!
Add a photo to this gallery 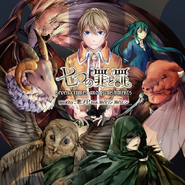 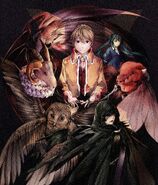 Retrieved from "https://theevilliouschronicles.fandom.com/wiki/Vlad_Tuberci?oldid=189246"
Community content is available under CC-BY-SA unless otherwise noted.