The Very Amazing Green Onion[note 1] was a magic tool used for long-distance communication. Developed during the days of the Magic Kingdom Levianta, the vegetable was utilized for short-term interchanges between parties.

Following the foundation of the Magic Kingdom Levianta during the BT era, humans invented the magic tool. Mages then used the magical green onion for communication between the humans residing in Levianta. After the kingdom's collapse in EC 013, the tool became a rarity and few surviving mages still maintained the knowledge of creating, preserving, and using the tool.[1] During the early 6th century EC, Elluka Clockworker and Abyss I.R. created their own very amazing green onions for communication with their collaborators in Elphegort and Lucifenia, respectively.[2]

The tool was an enchanted green onion that allowed long-distance communication between the owner of the tool and its user. By retaining the magic of its owner, the user could have the tool pick up its owner's frequency and allow the two to communicate. The device was activated by being shaken by the user and the hard green onion planted into the ground, emitting a dazzling light when actively used. Conversely, when the owner is attempting to contact the user, the green onion emits flashes of light.

One of the other abilities of the green onion was guiding its holder towards a designated second party, emitting another strong light when said party was located.

The green onion, while effective, was only good for moderate or rare usage; the time for users to communicate using the green onion was limited as well, and over time the voice of the speaker would become progressively fainter, eventually fading entirely when the time limit was reached. Similarly, because the tool deteriorated over time, it needed to be sealed in a special box to prevent decay.[1]

Gumillia holding the Green Onion in The Daughter of Evil: Clôture of Yellow

Gumillia with the Green Onion in Entr'acte of Evil: The Daughter of Evil Worldguide 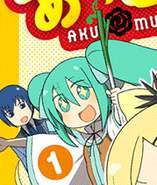 The Very Amazing Green Onion on the cover of Aku Musu

The very amazing green onion as seen in Quartets of Evil