The Evillious Chronicles Wiki
Register
Don't have an account?
Sign In
Advertisement
in: Locations, Places, Asmodean,
and 8 more
English 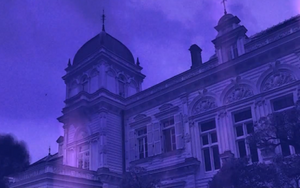 The Venomania Mansion[note 1] was the residence of the Venomania Family in Lasaland. Built in the suburbs away from the main city, the mansion was used by Duke Sateriasis Venomania to keep the women he abducted and captured during the Venomania Event until his assassination. Afterward, the estate became an abandoned ruin by the 6th century EC.

After the marriage of Ilotte and Nylpho Venomania, the couple settled down in the mansion. In EC 112, Nylpho gave birth to their first son the year later. After Nylpho committed suicide soon after, Duke Ilotte imprisoned the child in the mansion's basement. He soon remarried and had a child with his second wife in EC 115, Sateriasis.[1] Starting on September 7, EC 123, Sateriasis and Cherubim began sneaking out of the mansion to play outside during the night. Years later, Cherubim was released from the basement and allowed to live in the mansion as a servant.[2]

In December of 135, The Venomania Family held a banquet at the mansion. The next day, Cherubim slaughtered the entire family and staff. Shortly before he attempted suicide, I.R. visited the manor and discovered the massacre. Offering Cherubim a sword,[3] the two made a deal and Cherubim assumed the identity of his brother, taking custody of the mansion as the new Duke of Asmodean. After living alone for sometime, "Sateriasis Venomania" allowed Lukana Octo to move in while she tailored his new clothes in January the following year.[4]

At the end of the month, Sateriasis had I.R. and the brainwashed Lukana move into the basement. Several weeks later, in February, Mikulia Greeonio moved in as the second member of Venomania's harem.[5] Afterward, Lolan Eve and Mirigan Adi moved in as well. Later on, Marquis Claster Glassred visited the manor with his daughter Gumina to discuss their engagement. Several days later, in March, the brainwashed Gumina and her servant Carol Shields moved into the basement with the rest of the harem.[2]

Later on, Hakua Netsuma joined the rest of the harem in the mansion's basement, followed by Queen Yufina Marlon and others during the ensuing weeks. In April, Lilien Turner moved into the mansion basement as the latest harem member; as time progressed, Duke Venomania welcomed more and more women into the manor. Later that year, Elluka Clockworker visited the mansion as part of her investigation into the recent disappearances. Soon after, Count Karchess Crim, disguised as Elluka, infiltrated the manor before promptly assassinating Duke Venomania; the freed harem women fled the mansion soon after.[6] Afterward, the mansion was abandoned and fell into disrepair, becoming ruins.[7]

In EC 992, Lasaland and the rest of Asmodean were annexed by Elphegort and the country was renamed "Tasan-Elphegort".[8] In EC 999, the mansion ruins were completely decimated by Punishment. Following the end of the Third Period and its subsequent merging with the Hellish Yard,[9] Sateriasis Venomania created an illusion of the mansion for himself and his harem. The Master of the Hellish Yard later arrived and returned Sateriasis to lower hell.[10]

The living quarters for the servants that resided in the mansion.[6]

A large and spacious area located within the mansion at the same level of space as the first floor. Due to a long period of it being unused, the furnishing became inorganic and the area was insipid. The basement consisted of thirty rooms along with a costume room, a fireplace, and a kitchen. It served as living quarters for Cherubim and later the countless women he abducted into his harem during the Venomania Event.[6]

An elaborate dining room where the family would take their meals, located to the left of the entrance hall. Within the dining room was a long table with a big chair placed conspicuously as the seat of honor along with a smaller chair to the side. The dining room also consisted of fireplace which was located behind the big chair.[6]

It was located to the right of the entrance hall. Some files were missing from the room in the wake of the Venomania family massacre.[6]

The manor's personal library filled with several books, which included diaries of the family and servant's daily life and work. Everyone besides the former Sateriasis kept a diary of their own.[4]

A room that was given to Lukana when she agreed to become the Duke's tailor, equipped with a work table and the highest quality of fabrics.[4]

Concept art of the mansion's basement for Seven Crimes and Punishments

The Venomania Mansion as it appears in Chrono Story

The Venomania Mansion in Deadly Sins of Evil (manga) 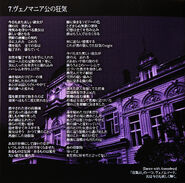 The Venomania Mansion in the Evils Forest booklet