The Evillious Chronicles Wiki
Register
Don't have an account?
Sign In
Advertisement
in: Events, Asmodean, Beelzenia,
and 10 more
English 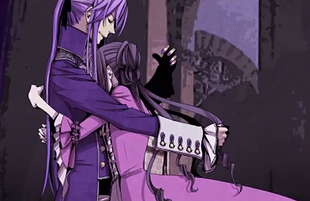 "Fine. Now, I will sink to any depth. So then–Gumina, as long as I can obtain you–"
―Cherubim[src]

The Venomania Event[note 1] was the name given to the mass abductions of women throughout the Beelzenian Empire, carried out by Duke Sateriasis Venomania. Through his demonic powers, the Duke of Asmodean enchanted, collected, and sexually defiled women for over a year before his untimely demise.

"I wasn't able to achieve anything. Not until this point, and probably not after it either."
―Cherubim[src]

Born to the Duke of Asmodean in the Beelzenian Empire, a boy was locked away by his father and neglected for years due to his deformity; his only friends were his younger half-brother, Sateriasis, and the daughter of Marquis Claster Glassred, Gumina. The boy was later freed from his confinement and made a servant to the Venomania household. Although reviled by the other servants for his deformity,[1] "Cherubim" remained close with Gumina and Sateriasis, having fallen in love with the former. Suspicious of Cherubim's relationship with his fiancée, Sateriasis planned to assassinate his brother.

After overhearing Sateriasis and a servant discuss the assassination plans in December of EC 135, Gumina worried for Cherubim's safety and decided to treat him coldly and throw off suspicions. Having learned of Gumina's engagement to his brother, the deformed young man attempted to confess to her. With Sateriasis watching them, Gumina attempted to ward off her fiancé's suspicions by publicly scorning Cherubim.[2]

Broken-hearted, Cherubim slaughtered his entire family the next day. Immediately afterwards, the man was approached by I.R. while he attempted suicide.[3] The sorceress allowed Cherubim to steal his half-brother’s face, and then encouraged him to make a contract with the Demon of Lust to give him its many powers, including the power to brainwash women.[4] In return, Cherubim was expected to aid her in future dealings.[5] The young man accepted the offer and forged a contract with the demon.[4]

"Forced? What are you saying? They all came here of their own will. I merely gave them a bit of a nudge."
―Duke Sateriasis Venomania[src]

Magically changing his face to that of his brother, I.R. quickly taught the man how to use a ritual to wipe people's memories within an area. After accidentally wiping his own memory in the process,[6] I.R. used her sources to have "Sateriasis Venomania" become the new Duke while he was determined to be the "sole survivor" of his household's massacre. Following Lasaland's New Year Festival of EC 136, the Duke encountered the visiting Lukana Octo in town and befriended the tailor, tasking her with tailoring some clothes for him.

Twenty days later, shortly after Lukana's departure for Mystica, some of Sateriasis' memories reawakened and he reunited with I.R. again. Using the Demon of Lust's power to take on demonic form, Sateriasis pursued the tailor to a nearby forest en route to Abito. Capturing and brainwashing the woman, Sateriasis was spotted by Mikulia Greeonio while working there. After failing to brainwash her with his spell, the startled girl fled.[7] Sateriasis returned home with Lukana and I.R. in total secrecy, keeping her in his basement while they made love for days.

A week later, in February, Sateriasis and I.R. visited the nearby village of Abito and found Mikulia in the village outskirts. With the peasant convinced he was her "prince" coming to take her away, the Duke returned home while I.R. stayed behind. At midnight that night, Mikulia sneaked out of her house and was led by I.R. to the Duke's mansion, becoming the second member of his harem and they made love for days.[6] Afterwards, he seduced the famed dancer, Lolan Eve, at her theater in Lisa-A and later the famous fortune teller Mirigan Adi in Evnemi, pleasuring himself with the different girls daily.

Around this time, Princess Maylis Beelzenia assigned Marquis Glassred to discreetly investigate the sudden string of disappearances throughout Asmodean. In March, Duke Venomania infiltrated the Glassred Mansion in his demonic form and slaughtered every guard and servant he came across. After brainwashing her bodyguard, Carol Shields, Venomania captured and brainwashed Gumina, wiping the girl's memories of Cherubim.[1] Following Marquis Glassred's subsequent breakdown, Princess Maylis assigned Marquis Ferdinand to take over the field investigation into the disappearances.

Sateriasis later brainwashed Hakua Netsuma after coming across her. Soon after, the Duke successfully abducted Queen Yufina Marlon while touring Asmodean with Marquis Donald. To keep the issue from becoming an international scandal with Marlon, the Beelzenian Imperial Family reported the Yufina was too ill to return home.[8] By early April, the unsatisfied duke brainwashed and kidnapped Sonika Sonic, Lazuli Blue, and Priema Soap.[9]

That month, Sateriasis visited Mystica with I.R. in order to obtain a supposed vessel of sin in the Misty Mountains' ruins. While visiting the town, Venomania seduced his guide to the mountains, Lilien Turner,[5] and discovered the alleged vessel was just a regular magical spoon. Afterward, the Duke massacred the entire Ferdinand estate and began courting Lilien over the next several days.[10] After being discovered to have kidnapped her childhood friend, Lukana, the Duke brainwashed Lilien and brought her under his control.

Venomania then encountered her other friend, Rajih Assad, who witnessed his depravity and demonic power. Briefly battling with Rajih in his demonic form, the duke defeated him and left Mystica once the town's memories of his visit were erased.[4] Princess Maylis assigned the spy Neruneru Nerune to replace Marquis Ferdinand in the investigation. As the year progressed, Sateriasis added Mewtant Lusha, Tette Cetera, and Rio Neja to his harem, his harem numbering fifteen by the summer. During that same summer, Maylis recruited Count Karchess Crim of Marlon to assist in the investigations.[9]

After a month of investigation, Karchess pursued a lead concerning the Ferdinand Family massacre and Lilien's disappearance. Interrogating the nephew of the deceased marquis at Mystica, Karchess learned of Rajih's ravings about Duke Sateriasis' involvement. He then recruited the drunkard and learned of Venomania's involvement, forwarding his potential lead to Maylis.[11] After Neruneru Nerune was enchanted by Venomania, the Duke used her to help him capture and brainwash Maylis herself.[9]

Growing increasingly absorbed in his harem, the duke's lustful and sadistic nature became more and more warped. Around the same time, some of the women began growing weaker as a result of Sateriasis continually drawing on their spiritual energy to fuel his powers; Lolan Eve, in particular, became bedridden and was eventually discovered dead the day after having sexual intercourse with Venomania. She was taken out and buried by I.R.[12]

Due to both Maylis and Yufina's disappearances, Elluka Clockworker was hired to help both Beelzenia and Marlon find the missing women and solve the case. Meeting with Count Karchess, the two agreed to work together and concocted a plan to free the women from Venomania. Karchess, having had an affair with the kidnapped Yufina and frustrated by Elluka's slower pace, deviated from the plan and disguised himself as Elluka.

The Marlon count infiltrated the Duke's mansion and approached the inviting Venomania. As Venomania brought him into the basement and prepared to have relations with what he thought was the sorceress, Karchess stabbed Sateriasis with Grim the End after it transformed into a knife. The duke collapsed and the Lust magic infused in him from the Demon leaked from his wound. With his power broken, the women were freed of his spell and fled from the estate. He died shortly after due to his injury.[12]

The women abducted by Venomania were later discovered by imperial officials; although most were able to return their families unharmed, some perished after the event as a result of their spiritual energy being drained. Levin professors of the Held sect soon established Venomania as a demon and many of the women faced intense discrimination for their relationship with the Duke. Among those, three of the women were pregnant with his children and were identified and scorned for spreading his lineage; their children, similarly, were possible carriers for HER Syndrome.

For murdering one of the Five Dukes and not going through official channels to bring him to justice, the Beelzenian Empire began hunting Karchess after he fled with Yufina and eloped. With their affair uncovered, Yufina's husband, King Martius, also began hunting for the pair. Two years after Venomania's death, the two staged a coup to remove Martius from power and establish a "legitimate Marlon country", with no ties to Beelzenia.

Lukana and Lilien later began travelling east to Akuna with Rajih, as well as Lukana's daughter with Venomania. Following the birth of her daughter by the duke, Princess Maylis gave the child to Baron Tae Conchita and his wife to hide the relation. Gumina, having fled with her family to Elphegort,[2] became the nation's first female prime minister and an advocate for women's rights in politics.[13] Within a year after the incident, Mikulia ended up in a brothel in Lasaland with her and Venomania's son and later died.[14]

Centuries later, the novelist Yukina Freezis wrote a Freezis Fairy Tale based on the event entitled "The Duke and the Four Women"[15] Hundreds of years afterward, the celebrity Scherzer attempted to recreate the incident, kidnapping countless women and locking them in his mansion's basement before selling them into the slave trade until his crimes were discovered.[16]

The citizens of the Beelzenian Empire were baffled by the sudden disappearances throughout the region, each girl seeming to have simply vanished without a trace. Nobles who attempted to look into the incident were usually unsuccessful, and close friends and relatives to the victims became increasingly distressed by their absence.[5]

Due to Venomania's power over memories, few citizens recalled him at the site of each disappearance;[11] because of this, none suspected the duke of his involvement and believed he was merely investigating, along with the other nobles in the Empire.[5] The only exception to this were the worshipers of the Held Sect, who were able to resist the memory-wiping ritual thanks to Held's blessing; despite this, the followers' claims that Venomania was the culprit were treated with heavy skepticism at the time due to them all belonging to one sect.[9] Even after Venomania's death, many details about the event remained unclear to the public, including the exact number of women abducted into his harem or Venomania's true identity as Cherubim.[11]

In Asmodean history, many citizens venerated Venomania as a hero for his exceptional tenure as duke; this veneration lead to Venomania having a significant impact on Asmodean culture, adopting military and cultural traditions connected the Venomania family dukes and the man himself. In other parts of Evillious, particularly among Levin believers, Venomania was instead reviled as a demon.

Because of their bodily association with him, women who had been confirmed part of the duke's harem were feared and publicly shunned; this discrimination extending to their descendants and continued for many centuries.[17] It was only by the tenth century EC that Venomania's crimes and legacy faded from public memory,[18] although still remembered in history by some.[16]