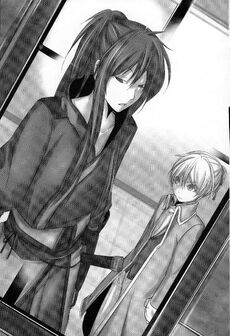 The Venom Mercenaries[1] was a band of mercenaries hailing from Asmodean, represented by the legendary Gast Venom. Traveling together in search of work, each member fought together as a single unit for their employer but otherwise acted largely on their own.

Sometime after EC 478, the group was founded when the famed mercenary Gast Venom and a number of other mercenaries chose to travel together in search of work. Growing into a sizeable army, the company traveled around the region from employer to employer. Commanded by Gast in combat, the group gained a sizeable reputation.

In EC 500, the group was hired by the Kingdom of Lucifenia to help defend the nation as the Lucifenia-Elphegort War continued. After Gast Venom ingratiated himself to the reigning Princess Riliane Lucifen d'Autriche and moved into the palace, the other mercenary soldiers took residence in the different cities.[2]Using the authority of the royal palace, the Venom Mercenaries looted, raped, and murdered as they pleased, spreading mayhem across the Yellow Country.[3]

During the outbreak of the Lucifenian Revolution, the mercenaries were deployed in Rolled to defend the city against the rioters. After suppressing the riots, an unidentified army arrived to reinforce the Resistance and, faced with overwhelming numbers, the mercenary group retreated back to the capital. During the ensuing battle at Lucifenian, the group failed to protect the royal palace from invasion. Supporting the Royal Guard, Gast defended Princess Riliane but was later slain by the Resistance's leader, Germaine Avadonia, and the palace was taken.[4]

After Gast had been killed during the palace invasion, the group fell apart and sewed chaos in the streets. Soon after, they were repressed by the Marlon military and the troops were picked apart and executed.[5] The surviving Yarera and Zusco managed to escape and became pirates along the Hark Sea between the main continent and Marlon, eventually forming their own pirate band known as the Yarera Pirates.[6]

Retrieved from "https://theevilliouschronicles.fandom.com/wiki/Venom_Mercenaries?oldid=124929"
Community content is available under CC-BY-SA unless otherwise noted.