"My only desire is to keep you happy, even if it means I'm not happy myself."

Hey! I'm The Wicked Maid, though you may call me Gear, Arte, or Maid. I don't exactly know what else to put in this section, so just... read on, I guess?

"I didn't realize there was much more to this series..."

One day Painter showed me the Lunacy of Duke Venomania song. And then I found Daughter of Evil. Which I may or may not have seen before they showed me the Veno one. Whatever- I found it again. And then I found Servant of Evil. Then all the other sinner videos 'cept for wrath because obviously that wasn't out yet. This was all around, uh, 2011, I think.

I found the wiki in 2013 or so when looking for a picture of Gear to use for my ask account, Ask-GEAR... and then I kept to the chatroom, because the people there seemed friendly and interesting even though I was really afraid of them at the time, wow, amazing.

I'm now at chat whenever I can be and I don't regret finding you people at all.~ Oh, and I'll also fix things when reading pages randomly. Not as much any more, but. yeahokay. Continuing on, then, continuing on.

Also used to be a chat moderator, that was fun times. Got demoted 'cause anxiety but heyyy. I did a thing. I think I should at least get the satisfaction of knowing I tried. //nodnod

This is basically a rundown of my personality and if I happen to forget anything, I'll probably either forget to put it down again, or write it down here. :P

I feel like I'm a nice person, and I find that a lot of people think the same. However, I am really anxious and shy and introverted and awkward, therefore won't talk to anyone that I don't know unless they talk to me. I'm actually really talkative once I get to know you, I swear. ;-;

This Gear is generally a prideful person, hating to have to get help for something, but not enough to think I'm better than everyone else and will often frustratingly realise that maybe I actually do need the help. I'm also selfish on some things more than others, depends on what it is. Don't touch my oranges or boxes.

Hmm, what else... oh, yes, the ironic thing is that I also like helping people. A lot. So if you need anything, ask and I'll gladly do what I can to the best of my ability. <3

I try to be polite, so do tell me if I'm doing something problematic so I can quit the act immediately.

Upon first meeting someone, I might not use emotes or anything. Once I get more comfortable I'll joke around more and use emotes and probably begin to get Fs in grammar at times. Actually- If you joke around with me first and I find you entertaining I'll be more prone to getting used to a new person faster so that may or may not be a huge plus, who really knows at this point. I'll probably also begin to use sarcasm (as a joke of course, though I also use it when annoyed) as well.

I also have a short temper in real life, yet for some reason over the internet this is toned down a bunch. I guess that's kinda a good thing, though, huh?

"Honestly, I'm not very good at many things. It doesn't help that I'm forgetful."

Really the only thing I'm good at is drawing and not knowing what I'm doing half of the time. xD;

Is forgetting a bunch of stuff a skill? I don't think so, but here's that anyway.

Apparently I also have this dark/black magic that I cannot control whatsoever and that's everyone's excuse for why chat always messes up. :'D

...I forgot what I was going to put here. I'm sure it'll come up again sooner or late-- ah, yes! Puns are a thing. I make puns. Purr-fect. Puns also annoy me, though. But they're so amusing. But guys. Puns.

Some notable habits around the wiki that I have. Of course, I'll try to stop if asked, but it may take a bit to get used to.

"There's a line for everything, you know.~"

I'm the Vessel of Invisibility, so obviously that cloak. :P (Or apparently I'm the "Maiddysword". I have no idea now. 'Tis confusing, these things.)

The boxes. Yes. Boxes. They are nice hiding places.~

Newspapers. I don't. I'm. I'm not old, okay, they're just. For hitting people with, I guess.

Gavels... I don't even use them all that much, though-

"We should make a new language; "Textlish"... and then push all the "Textlishans" away to TextLand, where we never have to see them again!"

Eh... Just PM me for this one, 'kay? We could probably play Pokemon together. Or Animal Crossing. Preferably Animal Crossing because I'm terrible at competitive Pokemon battles.

On Transformice I am Hollydacat. Some of us people on chat play it sometimes.

The nicknames I'll use for CaH or BGO are usually Gear, Guar, Haguruma, AllenAvadonia, or IfaLenKyunCouldKyunNau.

Ask for this one as well. Because I'd rather only people I know well have it. Not that I really check it all the much anyway, HA-- but really, if you have it and it takes me a while to reply, then here's your warning-.

ALSO ask for this one because yeah, I check it regularly but I'd also only be comfortable with people I actually trust on it, especially since you can video chat, thankyouuu. :'D

These are my favorite songs in the series, not particularly in order.

wAIT, WHY DON'T WE HAVE PAGES FOR THOSE TWO YET-- Apparently I was spelling said two pages wrong this whole time. Bravo, me.

My favorite characters, again not in any particular order. This might change depending on how the story changes in the future. It's mostly the Kagamine characters because they're my favourite.

And we all know I can't deny loving the twin gods; Levia and Behemo. I just wanted my lists to have even numbers, aha.

"Nor have I. But a tedious existence is the one without happiness. So learn to laugh, if only for a short while. Because the light it sheds in otherwise dim world is priceless." -Reminders, this isn't mine but I found it on a youtube comment once and youtube gets deep sometimes whoa but yeah I need this so;;

Parody of the group in the thingy and the fives and the sixes and Pierrot and Iforgotwhatitwascalledwow.

Master of the Graveyard yes 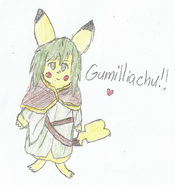 This was for a friend, uh-- 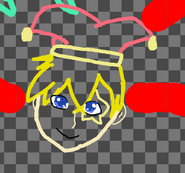 Goodness, did you read this all the way through? You should get a reward for that, wow. I'm not that interesting.