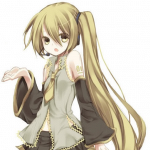 I can be a tad bit random, but mostly I will try to be logical and boring in comparisson to everyone else. I also can't spell or code for my life, so it's very helpful here.

I call everyone by Miss/Mister depending on their identifing gender. If you would prefer something else, do tell me.

I have been into the Evillious Chronicles for quite sometime. However, because I am lazy as all ****, I never signed in. But, now I have and everyone is very nice.

The main thing that happens in the chat is that we all are convinced we live in a dome, where everything is possible. Well, everyone but Mister Maid believes this. Maid is determined to deny its existance.

Inside of the chat, everyone has decided upon different people to be their family members. And I do mean everyone. Some of the people on the tree are RP characters, but most are just the users.

Wife: Dark and I are married (despite both being female). Our relationship is one where I make up stuff and she tries to make sense of everything. We apparently live in a treehouse and have a pet Eevee.

Daughter 1: Gummy was a random addittion, but isn't that how all children are? Ahaha! She, to my knowledge, lives in the treehouse with Dark and I.

Father-in-Law: Lawful is Dark's father. We seem to enjoy trying to confuse my wife. He owns a Flareon.

Mother-in-Law: Jade is Lawful's wife and Dark's mother. She is not what I would call 'sane'.

Uncle-in-Law: The Nefarious Mister Lemmings. While I don't call him uncle, I can't help but feel I must add him on the list unless something happen in the dome.

Sister: On a whim, Cranberry became my sister surprising my 'father'. I find her to be a fun person, so I expect insanity to come from her. I have high expectations.

Brother-in-Law: Museum became my brother in law during the middle of the night. I was asleep while this happened, so I woke up to needing to edit the tree.

Sister-in-Law: Jade was weird and had a super short RP pregnancy. By short, I mean like an hour, then she gave birth. In chat. This child apparently looks like Tone Rion.

Son: Dark and I's RP child. This occured only due to Seven's insistance. It was born in chat by magic, confusing Dark imensely.

Mother: Eve said she would become my mother. She and Alchemist got married in chat, much to their confusion.

Father: He decided to give in and become my father. A few days later, he gained a wife and another daughter. It was wonderfully confusing.

Daughter 2: Galley became my child without my knowledge as well. Things seem to happen while I'm asleep.

Open the chat. It's simple enough. That or just post on the message wall.

Retrieved from "https://theevilliouschronicles.fandom.com/wiki/User:Swirly592?oldid=79929"
Community content is available under CC-BY-SA unless otherwise noted.