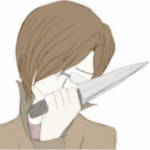 Yo. In case you didn't know when you clicked the link, I'm PsychoPaleNoel, but you call me Pale or else. Very few people get excepted from that rule! I should probably put down some stuff you want to know about me....

Milky Eights - Ex-girlfriend (get this woman away from me)

And now that he's all done, it's my turn~ My name is Soubi, derived from my long Deviantart name, AgatsumaSoubi20. I am also known as Pare by Pika or simply Pale when no one wants to use my silly nickname. (I used Evils-Theater's profile as a model for my own. I don't know how to format this stuff myself yet. XD)

I will say this now; I may be on Deviantart a lot, but please do not tell me which profile to go on and when. I check them regularly and will see your post within twelve hours. I do have a schedule to adhere to. I will only accept such 'requests' if I haven't been on the account for a certain amount of time.

"Eeep!"
―The first thing I thought when I first entered the Evillious Wiki Chat[src]

It's hard to say when I first came across the world that is the Vocaloid/UTAU fandom, but I do remember that my first Vocalouid song was Insanity by Circus-P. Shortly afterwords, I came across UTAU while looking for a way to get myself Vocaloid. As of [December 17, 2014], I own the Vocaloids Rin/Len ACT2 (soon to include V2 appends), Miku V3, Meiko V3, V-Flower, Sonika, Tonio, and Avanna. *I might have a problem... OvO;;; //brick'd*

My first contact with the Evillious Chronicles was listening to Servant of Evil, back in the summer of 2013. Admittedly, I only listened to it because I was bored and looking for something to do with my unlimited free time, but that one song had me hooked. However, I really began to get into the series when I first heard Escape of the Witch Salmhofer (aka, the first MEIKO song I liked XD).

I didn't find the wiki until recently in early January, when a friend of mine suggested that I take a look at the site. I joined as PsychoPaleNoel, keeping to my Pale persona, and have never looked back. When I first joined the chat, I was scared out of my mind, unsure of what to do or say. But the people there were very warm and opening, and now I can't wait to see what chaos brews in the chatroom~ 8D

Huh, I'm not quite sure how to explain my personality. Most times, I'm usually nice and willing to lend an ear. Though there are some times that I create chaos for the sake of chaos. If you don't believe me, just ask Pale and FA (or better yet, their kids. XDD). Like everyone else, I do have triggers that can throw me into a bad mood. You'll know when it happens by my apparent tone on certain topics.

I may also be partially sadistic sometimes, but I swear I'm good otherwise! XD

As a general warning, most of my thoughts tend to take to the violent side. I think that's why it's fun for me to RP as Pale~

(No, you're just a psychopath, Soubi) SHUT UP, PALE! THIS IS MY SECTION!

In comparison to Pale, I am the true Master of Maliciousness~! I'm good at making some canon characters hate my guts, as well as twist them until they bend to my will! >8D I dabble in a few mediums, including drawing, literature, games, Vocaloid/UTAU covers, and MikuMiku Dance.

I am usually a grammer fanatic, always checking my response before I post for spelling errors. However, there are times that I miss something and it turns into a funny joke on chat. My most common emoticons are (XD) (8D) (>:\) (>~<) (T^T) and (;~;)

Pale - Soubi is a Psycho. End of story. *is shot by admin*

y'all are a bit odd as is everyone else in chat. and I'm...maybe not human.

Favorite Characters (Not in Order)Edit

Favorite Songs (Not in Order)Edit

Retrieved from "https://theevilliouschronicles.fandom.com/wiki/User:PsychoPaleNoel?oldid=121964"
Community content is available under CC-BY-SA unless otherwise noted.