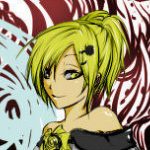 Misstress of the heavenly yard

I am the Misstress of the Heavenly Yard, but you can call me Missothy, Erratic or Erra. I'm a very big fan of the Evillious Chronicles and I hope that I can contribute something usefull to this wiki. As the Misstress is a dumbs**t she will forget she is on chat so don't be surprised when she goes on and the dissapears forever.

Q. How do you alway managed to fish out the smallest details on the past the the staff of Evillious?

Although sometimes dimwitted, she is wise and reasonable.

Erratic will switch personality sometimes for the pure sake of comic relief. This causes her to be uptight and selfish. She looks down on everyone, seeing herself as the greater being. Despite this, she does not act childish like Riliane but more mature and ladylike. She always holds a fan in her hand when she becomes like that.

The Misstress is quick to search and find information and addiding it to the wikia, even if she sometimes goes over board.

Connections to other peopleEdit

Lenfield: One of Erratic's friends.

The Dragon with Seven Heads: Her loyal pet whom she created out of the vessels of sin and her last powers, completly emptying her. She managed to make her nearly invicible.

UnitedStateofPikachulious: A friend of Erratic. She cares for them and wishes to protect them from harm.

LemyTheRipper: A boy Erratic once dined with. After a chat with him, she started to see his simularity to Alexiel and he started to her as Gretel. PLOT TWIST: They're actually cousins

Wanderingsilverrose:Erratic's mother. She loves her a great deal.

Servant of Evillious: A Servant who directs Erratic in the right way so she won't do wrong. She is grateful for this and respects him.

Alexiel Lucifen: Erratic's husband. She first showed affection to him after he showed her an interview with mothy and Ichika by kissing him. They later got married in chat after she proposed.

IX. The Alchemist: The priest at Erratic's wedding, despite not having spoken that much, she trustd them.

Flower Saga, Pere Noel Saga and Court Saga are just made up names I made for the "mini seires" for some deadly sins of evil. The Lunacy of Duke Venomania, Gift from the princess who brought sleep and Jugmentof Corruption / The Muzzle of Nemesis respectively

Retrieved from "https://theevilliouschronicles.fandom.com/wiki/User:Misstress_of_the_heavenly_yard?oldid=157265"
Community content is available under CC-BY-SA unless otherwise noted.