"Can that be added to the trivia?"
―GT

Hello! My name is GreekTelepath, but you can also call me Greek or GT. I'm a huge fan of the Evillious Chronicles in general, but the Père Noël arc is probably my favorite one.

"I can'T STOP CRYING"
―GT at some point, probably

It all started in 2010 when I, a prepubescent blob lurking on the dark depths of deviantArt, absentmindedly clicked a link on one of my friend's drawings. As if by fate, I was directed to a PV of The Servant of Evil. I was completely hooked and had listened to it about thirty times in a row before crying myself to sleep that night. I eventually discovered Regret Message and well, the same thing happened.

In summer of 2012, Handbeat Clocktower somehow showed up on my YouTube recommended videos list. Clicking the link, I was absolutely thrilled to see another Story of Evil song. Luckily, the one I clicked was the video made by Triuberit, which just so happened to have a link to the wiki in the video description. Wanting to know more, I visited the wiki and well, here we are.

Work at the Wiki[]

"Got some more work for you."
―Servy

After discovering the wiki, I initially only wanted to read more about the Story of Evil, being content with looking at the History sections of the Story of Evil characters. However, the main page (which, at that time, contained a listing of all the songs with short blurbs about them) piqued my interest, and so I began listening to the songs in order. It then all made sense to me: a few months before discovering the wiki, I watched a random video on YouTube explaining how The Daughter of Evil was, in fact, part of a larger series called the Seven Deadly Sins. Since it was made by a fan, I was skeptical about it, but still enjoyed listening to the other songs despite thinking they didn't take place in the same universe as the Story of Evil.

Some time later, I began commenting a lot on the pages (back when Animak3000 was still admin) and mostly pointed out the inconsistencies on the pages. Other than that, I generally lurked around the wiki, only correcting grammar and spelling here and there and citing the occasional trivia point. By the time Servy became admin in 2014, I was pretty entrenched in the wiki; checking it was part of my daily routine.

One of Servy's projects was putting up Discussion Threads on the forum about the different light novels and Evillious media. Like the other users, I jumped in and participated in the discussion. While discussing the Gift novel, I volunteered to draft the proposed Bolganio Wildlife article in my Sandbox. Of course, this wasn't the first time I had drafted an article. A few months back, I once made mock-ups of the Beelzenian Imperial Family and Felix Family pages on blog posts, since I didn't really know how Sandboxes worked yet.

Moving on, my page eventually got put up. I felt really proud of it, because it was like a baby I had brought into being. (Octo feels the same way about articles she's drafted, just so you know.) Servy then continued to give me things to work on, and it's been my main duty ever since. However, being a sucker for trivia, I still like to point out possible inspirations for mothy's work from time to time. I also go on chat a lot as well as reply on the forum threads - if you get a notification, there's a large chance it's because of me. :P

"mY SANDBOX IS READY"
―GT

Since June of 2015, I took a long break from the wiki due to schoolwork and mental health reasons. But now I am back and in the groove. In the wake of Servy's months-long disappearance, I volunteered to become one of the new admins alongside Octo and Akujiki. It's really an honor to be given this position, and I hope I can serve everyone well. (Mind you, though, being admin doesn't make me above the usual shenanigans.) 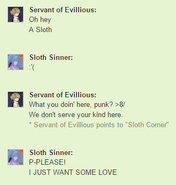 What's funny is that it's actually in-character for Margarita to say that.

In case you didn't know, Servy is a senior citizen.

Mistress asked why Banica was featured on the link to the Deadly Sins of Evil website.

Painter does not seem to be alright.

Apparently Servy was present in the CaH game the entire time.

Someone called Servy our mom. I disagreed.

We all are at times. 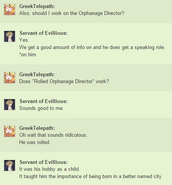 Servy and I talking about the outrageous amount of mansions in EC.

Not even gonna ask.

We were discussing Gallerian x Ma.

Yeah, I don't even know the context of this one.

The first highlight of the Evillious crack ship discussion.

I happened to bring up Gumina x Portraits.

We were talking about the Seven Crimes and Punishments song.

About the Seven Crimes and Punishments story and its four Lens. 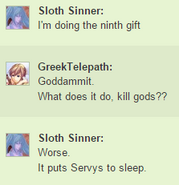 People are shipping me with Lemmings.

Me and Dark's wedding highlights part 1.

Me and Dark's wedding highlights part 2. 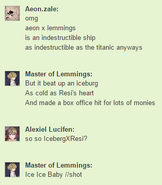 And the SS AeonLemmings sets sail.

Plot twist of the century. 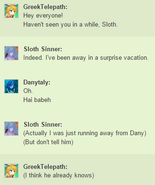 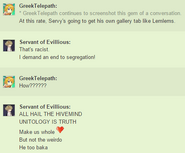 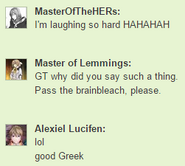 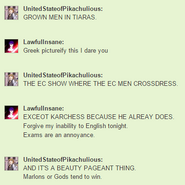 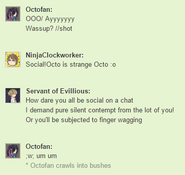 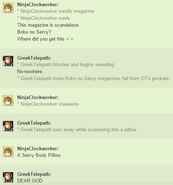 YES I know I got the Math wrong. Give me a break