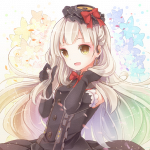 aka Deliverer of Fate

I'm a high school student in western Alberta. I used to mainly use wikis for getting information for fanfics, but now I'm trying to become an active member. I'm generally still a noob though. I am a huge fan of the Evillious Chronicles and I follow every episode of Red vs. Blue. Bit of a Final Fantasy geek as well. In Evil's Empire, I am a resident of the Magic Kingdom Levianta. I am the Captain of the Guard, Deliverer of Fate in battle.

I really don't have too many hobbies, but I do them with passion. I write a lot of fanfictions. I would never dream of publishing them though. Still too much of an internet noob. I'm a gamer girl, just not the typical games that classify a gamer girl. RPGs and Project Divas mostly. I have a decent manga collection in my room, and an overwhelming watch list of anime. I only recently discovered this thing called "Vocaloid" and spend my online hours browsing music (13 hours on my phone, and Evillious Chronicles plays no small part). Other than that, I don't really do anything else.

I was recently adopted by LawfulInsane and my sister is Darkwarrior101. My mother is TotalConflagration (but she doesn't know it yet...) The full family tree is on Total's page.

Retrieved from "https://theevilliouschronicles.fandom.com/wiki/User:Adriash44?oldid=111932"
Community content is available under CC-BY-SA unless otherwise noted.