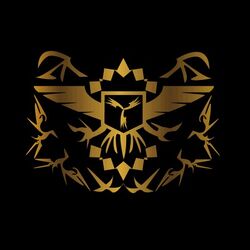 The Union State of Evillious[note 1], also known as the USE, was a state in the Bolganio continent's Evillious region. Formed by the joining of Lucifenia, Elphegort, Levianta, and Marlon, the state prospered for centuries before eventually falling apart.

In EC 878, the USE was formed by the signing of the Aishikeru Treaty, joining together Lucifenia, Elphegort, Levianta, and Marlon.[1] Around this time, the USE Dark Star Bureau was also established. At some point, a zombie epidemic broke out across Evillious, affecting the USE's member states.[2] In early EC 982, Lucifenia called for the USE to invade Beelzenia; ignoring the call, the USE consented Elphegort forming alliances with Asmodean, Beelzenia and Levianta.

When war broke out across Evillious later that year, the USE government failed to act due to its member states' disagreement. After the outbreak of the Leviantan Civil War, the USE attempted to address the conflict by sending in the World Police and later the military.[3] After ending the civil war using the military, the USE's government collapsed.[4]

In EC 993,[5] Elphegort invaded Lucifenia and was immediately expelled from the USE. In response, the USE army, composed of the Marlon and Leviantan militaries, declared war on Elphegort and its allies, Beelzenia and Jakoku. Launching a two-pronged invasion on the Green Country, the USE army successfully liberated Lucifenia in EC 998.[6] In EC 999, Elphegort's Punishment was fired across Evillious, decimating the USE's territories. Following the end of the Third Period, the destruction site merged with the Hellish Yard along with the rest of the ground world.[7]

The USE government's judicial branch existed in the form of the Dark Star Bureau, with the bureau functioning as an international court and having the power to establish its own police force.[8] The government's laws were enforced by both Police Neutrality and the World Police, which were both tasked with protecting citizens against civil disorder.[8] For felons convicted of especially dangerous or unusual crimes, hanging was the primary method of capital punishment.[9]

The Union State had a large, organized military, composed of citizens from its member states with each army acting as an individual force presiding over the member state's territory. USE soldiers were typically armed with rifles and used armored vehicles for transportation.[3] In widescale armed conflicts, the USE could form a coalition force of all the armies.[6]

The USE used a mixture of minted gold coins and paper currency to back their economic wealth for streamlining trade and held little to no repercussions for underhanded dealings.[10] There was also a thriving news industry within the nation, collecting and disseminating information for the public's interest.[11] It also maintained trade with eastern nations like Jakoku prior to the outbreak of world war.[12]

Due to its being comprised by multiple individual countries, the USE had an extremely diverse culture. While considering themselves part of the USE, most citizens' loyalties ultimately lied with their home countries. Due to the strange phenomena around the world, many of the USE's residents were alarmed by the happenings and were especially wary of the zombie epidemic. Because of this, many of the public blamed witches for the strange phenomena.[8]

The USE also retained the aristocratic elements from its member states, including nobles as part of its social structure.[13] After the scandal and subsequent imprisonment of Loki Freezis, public support of the World Police dropped and the citizenry began calling for a neutral police force.[14]

Following the Leviantan Civil War, the public grew contempt with Gallerian Marlon's court tactics and often spoke about him with disdain years after his death.[15] Similarly, the existence of Gallerian's fortune allegedly being inside the Millennium Tree Forest eventually became a part of local folklore, with the legend of Evil's Theater in the Evil's Forest becoming a popular tale of warning.[1]

Due to the invention of the radio, media reporters spread news quickly to listeners across the nation and kept them updated on important political or societal affairs within the country as well as abroad. Similarly, the flashbulb camera led to sporadic interest in images and news reporters often scrambled to take photographs of notable public figures.[16] As another form of media, movie theaters showed a variety of films for entertainment.[17]

Formed by the nations agreeing to create it, the USE has a landscape largely featuring forests, mountains, rivers, grasslands but included areas such as Lucifenia's Babul Desert and Levianta's snowy region. Similarly, its climate was also varied.

One of the Union State's territories in the northern region of Evillious. It erupted into civil war due to Chief Justice Gallerian's corrupt bargain with the accused General Ausdin.[1]

One of the Union State's territories in the north-western region of Evillious. Its famed Millennium Tree Forest became regarded as "Evil's Forest" as rumors of treasure hunters seeking Gallerian's small theater disappearing began to spread.[1]

One of the Union State's territories in the mid-western region of Evillious.

One of the Union State's territories off the western coast of Evillious.

The Union State of Evillious crest in the background of the Deadly Sins of Evil: Judgment of Corruption website
Add a photo to this gallery

Retrieved from "https://theevilliouschronicles.fandom.com/wiki/Union_State_of_Evillious?oldid=189118"
Community content is available under CC-BY-SA unless otherwise noted.