The Evillious Chronicles Wiki
Register
Don't have an account?
Sign In
Advertisement
in: Locations, Places, Elphegort,
and 7 more
English 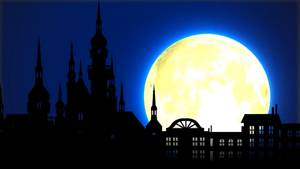 Toragay[note 1] was a city in the Kingdom of Elphegort and the residence of the noble Felix and later Blankenheim families. It was subjected to the massacre caused by Margarita Blankenheim, nearly eradicating its entire population.

Toragay was originally founded as a village by the poor that had been forced out of Aceid.[1] It later became a major city; the Felix Family was appointed as the governing earls.[2]

Soon afterwards, the Felix family lost its noble title and was replaced by the Blankenheim Family.[4] Later during the century, the Sisters of Clarith established a Charity Institute in the town and it gained the Felix family's support. In June, EC 608, Marquis Kaspar Blankenheim and Margarita Felix's marriage celebration was attended by the entire town.[5] Around this time, the town's residents also rejected the proposal to have an election system for their government, continuing the Blankenheim family's successive rule.[1]

On August 30, EC 609, Marchioness Margarita Blankenheim poisoned her philandering husband with Gift during his birthday.[4] Following an investigation, the World Police determined his death was caused by tobacco. Later, on September 18, the depressed child gave her father the same poison during dinner and was discovered in a coma within his home the next day.[1]

Refining the poison into an airborne contaminant, Margarita administered her Gift to the children at the Charity Institute by October 14 before leaving town. On October 17, the epidemic killed all twenty-four orphans and staff at the Charity Institute and plunged Toragay into a panic. As the poison began infecting and killing more and more victims, the World Police initiated a lockdown on traffic between Toragay and the capital, Aceid, to quarantine the city.[6]

As everyone in the city began to die of the poison, a number of the townspeople took shelter in the Blankenheim Mansion's basement to avoid spreading the infection. In early November, a World Police detachment sent from the Freezis Foundation arrived shortly after and discovered that Toragay was seemingly annihilated, the death toll reaching over 300.

After the surviving 72 citizens were found and rescued later that month,[7] they were moved out of the city to receive treatment at a hospital in Aceid. After a cure was devised by Puerick Rogzé and the contagion was neutralized within the citizens,[8] the survivors returned to Toragay and began trying to revitalize the town.[9]

In EC 999, Toragay was completely decimated by Punishment. Following the end of the Third Period and its subsequent merging with the Hellish Yard,[10] Michelle Marlon came to the destruction site in the form of Margarita Blankenheim. Once she finished crafting the Eighth Gift, she unleashed her creation into the air before being confronted by Allen Avadonia and Clarith. As the Sleep Princess faced the two, the Demon of Envy arrived and observed the battle until Hänsel arrived in the form of Lemy Abelard and sealed away the Sleep Princess along with her Gift in the Clockworker's Doll. Afterward, the group disbanded and left the destroyed town.[11]

The residence of the Blankenheim family,[4] located in the center of Toragay. The mansion had a garden and finely decorated rooms, save for Margarita's bedroom.[5] It also had a large basement that was used for storage and black market auctions across the nation.[1]

The residence of the Felix family. Each of its doors were labeled for their purpose, including all the bedrooms.[1]

The Charity Institute[note 2] was an orphanage founded by the Sisters of Clarith in the western corner of town and largely funded by Marx Felix. The institute provided beds and meals for the orphans and the occasional visitor, with Margarita often coming by to make the meals.[5] During the Toragay Epidemic, the residents were the first to be killed by the sixth Gift.[6]

An inn where non-residents would stay in Toragay. By the early EC 600s, the inn was owned by Brigitta.[5]

The La Bula Pharmacy [note 3] was the local pharmacy in Toragay where drugs and medicinal ingredients were kept in supply. In the EC 600s, the shop was run by Egmont. Margarita purchased the raw materials necessary to make Gift from the pharmacy,[5] and the store unknowingly received sap from the new Millennium Tree sold on the black market.[8]

Toragay as seen in Gift from the Princess who Brought Sleep

Toragay in ruins at the end of the song PV

Toragay as it appears in Seven Crimes and Punishments