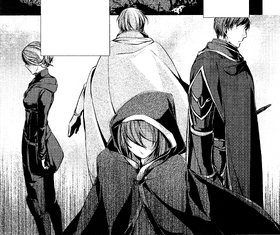 The Three Heroes[1] was a group composed of the three legendary figures loyal to King Arth I and the Kingdom of Lucifenia, recognized for their achievements in the Kingdom's war against Asmodean and Beelzenia. Due to their actions during the war, they were recognized as some of the greatest warriors of the late 5th century EC and had numerous devout followers.

During the conquests by the Kingdom of Lucifenia, the nation quickly expanded its territories and gradually gained momentum against its neighbors.[2] In EC 477, Mariam Futapie defected from Asmodean during the Battle of Babul Desert and swore fealty to King Arth I.[3] Along with Leonhart Avadonia, the two began spearheading Lucifenia's expansion.

In EC 480, Beelzenian Staff Officer Elluka Clockworker swore the Sanosun Bridge Oath to the Lucifenian king, joining his side in the war.[4] With all three under Arth's banner, numerous victories were made against Asmodean and the Beelzenian Empire. By EC 490, the three warriors were heralded as the "Three Heroes" for their success in the war,[5] gaining numerous followers as a result.

Service to the Crown

With the death of King Arth in EC 491, the war ended and the Three Heroes swiftly shifted their duties to being advisors and protectors of the Lucifenian Royal Family. In December of that year, a political scandal erupted in the palace over the right of succession. Queen Anne sought the individual advice of the Three Heroes over the incident. While Mariam was tasked with investigating Minister Presi, the Queen ordered Leonhart to protect Prince Alexiel and the warrior successfully averted an assassination attempt on the Prince.

Elluka confronted Presi immediately afterward and was attacked by the politician. With Mariam's support, the mage killed the treasonous minister. To prevent a similar incident until both twins came of age, Prince Alexiel was separated from his sister and adopted by Leonhart. To aid the recently exorcised Princess Riliane, the Queen had Mariam become a maid and assist in the child's recovery.

Once the prince was publically confirmed dead in the assassination, the Three Heroes continued serving Anne throughout the duration of her reign.[6] In January of EC 499, Elluka and Mariam escorted Princess Riliane to her mother's funeral.

After the Princess assumed the throne, the Three Heroes discussed their reaction to recent events and decided to bring Prince Alexiel back to the palace as a servant.[7] In preparation for retirement from her service to the Kingdom, Elluka took on an apprentice to study under her and eventually replace her.[8]

In early EC 500, Leonhart was assassinated for his inflexibility with Princess Riliane's rule, having stolen from the palace barns to relieve the citizens' starvation.[9]  Months later, Elluka entered a squabble with Riliane over her decision to burn down the Millennium Tree Forest and invade the Kingdom of Elphegort, fleeing after the princess ordered the sorceress' execution.[10]

Towards the end of EC 500 and the Lucifenian Revolution, Mariam commanded the Lucifenian troops defending the Heavenly Yard,[11] but was defeated by Chartette Langley and subsequently killed during her escape by her foster child, Ney.[12] With Princess Riliane's execution on December 26th, EC 500, the Three Heroes were formally disbanded.[13]

Following the groups dissolution, the Kingdom of Marlon occupied Lucifenia's territories in the aftermath of the revolution. Governed by King Kyle, the nation was occupied for five years while the group's sole survivor and defector, Elluka, was hunted by the Marlon military for the duration of the time. By the end of Marlon's occupation and Lucifenia's liberation in EC 510, the Witch Hunt had ended and Elluka was no longer pursued.[14] The Three Heroes continued to be remembered in history and legend for their actions under King Arth I and were well regarded in posterity.

Retrieved from "https://theevilliouschronicles.fandom.com/wiki/Three_Heroes?oldid=124955"
Community content is available under CC-BY-SA unless otherwise noted.