Are you looking for the song titled The Servant of Evil? 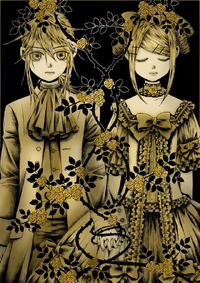 The Servant of Evil[1] is an ongoing serial manga originally published by Comic Rush on September 25, 2010. The story is a non-canon rendition of the song sharing the same name released by Akuno-P. The manga's illustrations are drawn by Nekoyama Miyao. After the release of its first volume,[2] the manga was discontinued before being relicensed by Comic Spica in 2014 as a web comic on Pixiv;[3] it has since restarted circulation on Denshi Birz on July 31, 2015.[4]

The Servant of Evil vol. 1|

The Servant of Evil vol. 2

Original front cover for the volume

Colored introduction to the first chapter of the manga

Illustration from the October 1, 2011 chapter of the manga
Add a photo to this gallery 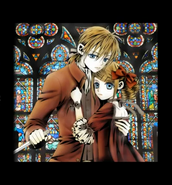 Rin and Len as they appear in the manga

Illustration of Len for the manga

Retrieved from "https://theevilliouschronicles.fandom.com/wiki/The_Servant_of_Evil_(manga)?oldid=174402"
Community content is available under CC-BY-SA unless otherwise noted.