Aku no Musume Ao no Purefatchio

With Kyle freed from the Demon, Yukina boarded the waving ship headed back to Marlon. The Daughter of Evil—after the Lucifenian Revolution, various incidents became the fuss of the Evillious region. No, the uncomfortable feeling had been there before that. The whereabouts of Elluka and Ney who disappeared, the fate of the Lucifenia and Marlon countries, the true aims of Marlon's Queen Dowager, Prim—and, what exactly are the "vessels of sin". In order to learn the truth, Kyle and Yukina, with those feelings in each of their hearts, set foot on the western sea island nation of Marlon. Are they awaited by their dear old family?

And then, "that girl" nestled on the beach, what role will she play in this story?

Keel's letter to Kyle invites the king back to Marlon for a future dinner party along with Germaine and Gumillia, adding to bring Yukina along.[1] On the main deck of the warship the Royal Victoricia, Kyle contemplates his return to Marlon, among other things, while watching the sea with Yukina. After some time a band of pirates approach the ship; after Kyle sends Yukina below deck, Admiral Dylan fires upon the marauders but fails to destroy the last vessel, which rams the ship. After being threatened by the pirates' captain, the sailors swarm the enemy vessel and attack.

The pirate captain and his second then come aboard the warship; although attempting to capture Kyle, Germaine comes above deck and recognizes the two pirates as Yarera and Zusco. Together, Germaine and Kyle defeat the two and the pirates retreat to their own vessel, which is then destroyed by a monster. As Dylan leads a fruitless attack on the monster, it rises and reveals itself as a giant octopus. Attempting to find a means to destroy the beast, Kyle seeks out Gumillia she begins making arrangements to kill the beast with magically enhanced cannons. Succeeding in weakening it, the ship continues on to Marlon. Gumillia explains to Kyle how the very amazing octopus could only have been enlargened by Elluka Clockworker.[2]

Kyle soon arrives at the Right Palace and returns to his throne room with Arkatoir. Keel arrives soon after, along with Shaw and Gerda; the king greets them all before the two attendants, along with Arkatoir, are sent away, Gerda leaving a package behind. Keel soon discusses Ney and Prim's current location with Kyle, as well as his belief that Prim has masterminded the demonic possession and manipulation of politics over the last five years. After Kyle questions Keel about reaching Castle Hedgehog, Keel brings up Gerda's package, Kyle's last surviving painting. He then relates how, twenty three years ago, Prim faked her stillbirth, giving birth to the girl in Kyle's painting.

On further questioning, Keel implies that the child is Ney Futapie; after recovering from the shock, Kyle visits the Freezis mansion to consult with the others on reaching Castle Hedgehog. After debating his attack plan with Elluka, Kyle convinces Germaine to help him by promising to withdraw Marlon from Lucifenia. Gumillia also lends her aid, convincing Elluka with the benefits of furthering their quest for the vessels of sin. Yukina bursts in, begging to come with Kyle, but he convinces her to stay behind to write of what happens. Afterwards, Kyle leaves the Freezis mansion and greets Mikina on his way out, seeing her play with Abyss I.R.'s red cat and recalling her past dislike of them.[3]

Sometime later Kyle stands in Lioness with his gathered army of soldiers, having prepared extensively for his assault. He checks his belongings to be used in the battle and recalls his meeting with Elluka; he then speaks briefly with Keel, who then promises to help Kyle in withdrawing Marlon from Lucifenia. That night, Kyle speaks with his troops and introduces them to Germaine as their new commander. The troops advance to Castle Hedgehog the next morning and reaches the castle gate, Kyle sending in a squad of men who are attacked by undead soldiers. Breaching the castle gate, Kyle leads his troops into the main hall and, following Ney, takes a smaller accompaniment with Germaine into the courtyard.

After the group is ambushed by the Espionage Task Force, Kyle goes on with two soldiers after Ney and ascends to the top of Heartbeat Clocktower. Meeting Prim and Ney, the latter flees with the Glass of Conchita and Kyle sends his soldiers after her; he then confronts his mother over her crimes, learning of her entire conspiracy from start to finish. Afterwards, Prim goes into an explanation on the sins in her possession and the Clockworker's Doll. As she does so, Ney enters during her speech; ignored by her mother, she kills Prim in a psychotic rage and then turns on Kyle, taking the full power of the Demon of Gluttony.

As he battles the overpowered Ney, Kyle refuses to borrow power from the Demon of Lust and is almost killed before Germaine arrives, giving Kyle time to subdue her. After Germaine persuades Kyle not to kill Ney, Kyle is approached by two soldiers and tells them a lie protecting Prim and Ney's reputation. He then takes Prim's corpse and her vessels of sin. Later, the group reconvenes in Castle Lioness and discuss the Demons of Sin they gathered, as well as what to do with Ney, before being attacked by an unknown figure.

Unconscious, Kyle has a dream where he learns Ney's true nature as Gretel, before she's taken away by the Demon of Gluttony. He's woken by Germaine and learns that Keel is injured, the vessels are missing, and Ney is dead. Kyle holds a funeral for Prim and is consoled by Arkatoir, before Shaw enters to inform them that Mikina and Yukina are missing. He gives Kyle a letter from Yukina, explaining how she had seen the culprit of the attack, insinuating it as her own mother, and has left to find her.[4]

After spending a day in the once-Lucifenia's port town, Yukina wanders lost on the beach before encountering Germaine; the two explain their reasons for being in Lucifenia, though Yukina claims it's just for a visit. Germaine leads Yukina to the Held Monastery and the two are confronted by Donnie, before a nun intervenes. Recognizing her as Clarith, Yukina reunites with her friend. Later Clarith talks with Yukina and Germaine and serves them tea, before Yukina sends Germaine away. Clarith and Yukina begin to catch up, before Clarith discusses Mikina's visits to the monastery and Yukina learns she was searching for vessels of sin.

After Clarith relates Mikina's visit of four days ago, the tea is replaced by the apprentice nun Rin, and the two introduce themselves. Bringing up the woman outside, Yukina introduces her as Germaine and Rin, as well as Clarith, panic. Germaine suddenly reenters and catches sight of Rin. After a tense introduction, the swordswoman greets her politely and leaves the room. Yukina questions Clarith, only for the nun to put off her questions and changes the topic. That night, Yukina hypothesizes that Rin is in fact Riliane.[5]

A week later, Yukina searches the coast at night for her mother, having heard word from Rin that she was spotted on the beach. As she prepares to give up, she spots Germaine threatening her mother and approaches, seeing the swordswoman confronting her as Abyss I.R. The two of them spot her; Abyss I.R., as Mikina, greets her daughter and, in Yukina's confusion, Germaine explains how she survived Elluka's earlier attack. Germaine then finds Abyss I.R.'s true body, her red cat, which continues to use Mikina as a puppet.

Germaine and Abyss I.R. debate their strengths before Yukina attempts to intervene. Seeking to demoralize her, the sorceress eventually forces Mikina to confess her forced alliance with Prim. Afterwards, she prepares to kill Yukina with a vessel of sin; Yukina prepares to give up before a voice speaks to her and, shortly after, Abyss I.R. is distracted by Rin. With the vessel of sin blocked from further use, Germaine attacks and eventually skewers her cat form. After examining the body, Yukina returns to her mother and anxiously waits for her to wake up.[6]

473 years later, Gallerian Marlon has finishes reading a book entitled "Daughter of Evil" lent to him by his friend, Ma. After Ma arrives, Gallerian discusses with her the authenticity of the book, and then denies her request to fund a film based on it. Gallerian then asks about the fate of the other characters in the book, particularly Gumillia and Elluka, and then questions Abyss I.R.'s motives for collecting the vessels of sin and then refuses to help Ma collect them either. After concluding their discussion, Ma leaves and Gallerian falls asleep. Later, his servant Rennert awakens him and informs him of his wife and daughter's accident.[7]

Germaine utilizing her new sword to replace the one Kyle destroyed

Yukina reunites with the rest of her family after her travels

Keel explains the identity of the girl in Kyle's portrait

Abyss I.R. reveals herself whilst wielding Elluka's body as her own

Covered in blood, Ney laughs after stabbing her mother 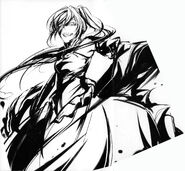 The manic Ney depicted in the light novel

A youthful Anne and Prim depicted in the the light novel 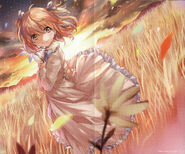 A young Ney when she was painted by Kyle

A young Allen and Germaine watched over by Leonhart

Abyss I.R. via Elluka's body with the vessels of sin 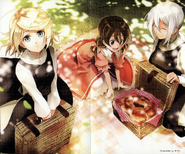 Rin, Clarith and Yukina having a picnic

Clarith and Yukina in the artist comments

Kyle with Germaine in the artist comments

Riliane smiling in the artist comments

Elluka in the artist comments

Rin, Ney, Allen, Leonhart and Germaine in the artist comments

Riliane as seen in the artist comments

Michaela and Clarith in the artist comments

A caricature of Riliane in the artist comments

Gumillia in the artist comments

Another depiction of Riliane in the artist comments

A lonely Riliane in the artist comments

Advertisement for the light novel
Add a photo to this gallery

Start a Discussion Discussions about The Daughter of Evil: Praefacio of Blue