The Daughter of Evil: Act 2

What's The Daughter of Evil?

The Daughter of Evil was a song produced by mothy using the Character Vocal Series 02 Kagamine Rin and Len released by Crypton Future Media for mothy's ease. First published on the posting site Piapro, it was then posted on Nico Nico Douga. The Daughter of Evil was then illustrated from a different perspective with the publication of The Servant of Evil. By depicting the one story in two works, when VOCALOID music at the time had fewer appreciated series of stories, it became popular in the blink of an eye. Together with The Servant of Evil, The Daughter of Evil produced a variety of derivative works, along with videos, and expanded into stage plays and cosplay. And then, in 2010, novels were realized by mothy himself. Beginning its first part with The Daughter of Evil: Clôture of Yellow and publishing its final chapter in 2012 with The Daughter of Evil: Praefacio of Blue, it became a blockbuster hit with a total of 800,000 copies in circulation.

Someone begins to write the story of "The Daughter of Evil" and the Seven Deadly Sins surrounding her. As everyone prepares for Princess Riliane's birthday, Allen Avadonia hears the cathedral bell chime three o'clock, noting it's snack time. Hearing Chartette Langley complain about their work, Allen reminds her of the danger they face if caught slacking and she returns to work. He then recounts how he ended up assigned to help the clumsy Chartette by Mariam Futapie when the maid suddenly freaks out, realizing Allen needed to give the Princess her afternoon snack. The servant states he already handed the job off to Ney and Captain Leonhart arrives to check on them.

As the three discuss how the Princess refuses to aid the starving citizens during the recent famine, Leonhart asks if Riliane went out since her horse, Josephine, wasn't in the stables. As the servant and his foster father reach the realization the princess has fled, they hear Ney scream for Riliane, while the Princess gallops away on horseback through the Forest of Bewilderment. A search party is then seen searching the forest and Ney runs up to ask Allen if they found the Princess. While Leonhart remarks how she escaped through the hidden passage in her room, Allen recalls the events of his childhood and tells Leonhart he'd go on ahead. Approaching the beach he went to as a child, the servant finds Riliane sitting there with her horse.

Telling the Princess that Leonhart and the others were worried, the Princess has a tantrum for Allen ruining her plan to kill Leonhart before deciding they should head back. The servant spies a cut on her hand and grabs it, prompting the Princess to slap him. He explains it was to heal her and she lets him, the servant recalling how he did this to her as a child too. Instructing her to head to the nearby port town and signal the guards, the pair travel together along the shore when Riliane notes how the sun is always alone, like her. After signaling the guards, Leonhart angrily berates the Princess for her stunt and she reasons it was their job to stop her, demanding they kneel before her. The Princess' subject abide her command and Allen mentally comments how the girl before him, the absolute ruler of Lucifenia, was his twin sister.

That night, during the party, the servants all work hard to keep the event going smoothly and both Allen and Chartette are exhausted from their work. Chartette then leaves for the kitchen, leaving Allen alone in his own thoughts. Mariam comes by and asks about what's on his mind, explaining that Elluka already convinced everyone that Riliane and Allen's resemblance to one another was a coincidence and that Riliane was unlikely to remember him. As Allen interjects, Ney bursts in and takes Allen away to help them push out the Princess' massive birthday cake. Aweing the audience, Allen overhears his foster father's anger and chases after him. Told Riliane was "The Daughter of Evil", Leonhart left. Mariam, suddenly next to the boy, remarks about his sentiments and encourages Allen to remain beside the lonely Princess.

Shifting to a year earlier, Allen meets his twin at the palace. Before she takes her look-alike along with her, Leonhart convinces her to wait for Mariam to dress him in appropriate menial clothes. A narration then explains how King Arth I and the Three Heroes conquered much of Evillious, making the Kingdom of Lucifenia the most powerful of its time, but that Arth died of a disease at the end of the war. As a result of a political dispute over who should succeed them, his twin children were separated after the death of two ministers, leaving their mother, Queen Anne, to rule until they came of age. However, she too eventually succumbed to the same disease as her husband, leaving Princess Riliane the only known living successor.

After Riliane states she would rule in place of her mother, although not taking the title of Queen until adulthood, Elluka Clockworker, Mariam, and Leonhart discuss Riliane's claim to the throne and consider bringing the "dead" Prince Alexiel back. After deliberating the risk, they decide to have "Allen" brought back as a servant to reunite the broken siblings, although Riliane lacks memory of her brother's existence. Retiring to her room, Elluka recalls the grief she felt over King Arth and Queen Anne's deaths and then has a prophetic dream of destruction. Renewing her resolve, she makes a false assassination attempt on Mariam but is easily thwarted by the maid. Revealing her intentions to leave Lucifenia, Mariam begs her friend to stay and Elluka states she will train an apprentice to replace her in the meantime.

Their conversation is interrupted by Ney and Elluka leaves, playing with her toy knife. Interrupted by Prime Minister Minis, she reveals she intends to go to Elphegort to find a disciple. In the Millennium Tree Forest, Elluka visits the Tree of Held, her old friend and tells him about what recently occurred. She describes how, despite her exorcism during the incident seven years prior, she discovered Riliane was repossessed by a Demons of Sin and needs an apprentice to help with the second exorcism. Showing the god the hand mirror she had sealed, he suggests that it was perhaps only a piece of the vessel, hence why Riliane had been possessed again. After telling Held of her four specific dreams, including Mariam's death in the palace courtyard, Elluka reveals only an invasion of Elphegort is guaranteed to occur.

When Held states her plans to run away if things fell through was typical, given her dislike to watch her loved ones die, she hits the god and he continues that Lucifenia may be better off not existing in any case. Saying she knew that, the mage asserts that it is her place to prevent her prophesized tragedies due to their connection to the Sins and Held returns to sleep before promising to think over her apprentice problem. While hitting the god, she is hit on the head with a fruit and discovers the spirits Michaela and Gumillia, in their animal form, lecturing her for attacking Held. After speaking with them, she leaves and considers them as her disciples, before coming across a white-haired girl. Hiding, she overhears the words the depressed child speaks and is disturbed.

At the palace, Elluka comes across Mariam, who discusses her search for an apprentice. Curious about what Allen was like, the mage asks the maid and she relates that she believes the kind and polite boy will be together with his sister forever. At that moment, Riliane screams for his execution, tackling the fleeing servant, to the two heroes' shock. While she arranges a bow on him, Mariam asks the girl if she was hurt and Riliane reveals her "wins" over the servant: her girly apparel in his hair. Mariam fixes up her shoddy work and pleads for Riliane to not threaten to behead people so whimsically. Elluka watches the possessed Princess deny the maid's wishes with a villainous smile before leaving with Allen.

Elluka comforts Mariam that she'll convince the ministers that the twins' resemblance was a coincidence. The sorceress then asks if any of the Netsuma Clan were still facing discrimination, revealing she saw a girl during her visit that reminded her of Riliane. Amused by Mariam's cute gesture of fixing Allen's bows, she teases her. As Elluka resolves to only focus on the Seven Deadly Sins, the white-haired Netsuma girl collapses in the forest, saying aloud that she is sorry for being alive.

Back cover of the volume
Add a photo to this gallery

Chartette complaining and Allen reminds her of Mariam 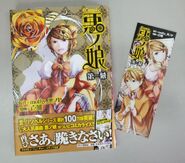 The Daughter of Evil: Act 1 alongside one of its complementary bookmarks

Yonkama manga included on the back of the volume's complementary bookmark

Advertisement for the volume

Advertisement for the manga in Waltz of Evil: The Deadly Sins of Evil Guidebook
Add a photo to this gallery

Retrieved from "https://theevilliouschronicles.fandom.com/wiki/The_Daughter_of_Evil:_Act_1?oldid=125899"
Community content is available under CC-BY-SA unless otherwise noted.