The Evillious Chronicles Wiki
Register
Don't have an account?
Sign In
Advertisement
in: Groups, Organizations, Tasan Party,
and 12 more
English

For other uses, see Tasan (disambiguation). 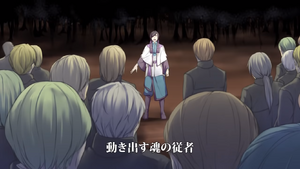 The Tasan Party,[note 1] originally known as simply Tasan,[note 2] was a political party in the Union State of Evillious. Founded as an anti-government political organization, it later evolved into an official party in the wake of the Leviantan Civil War and eventually gained total control of politics in Elphegort.

Sometime during the late EC 900s, Tasan was founded as an anti-government organization in opposition to the corrupt justice system of the USE Dark Star Bureau,[1] headquartered in Elphegort with Gammon Octo as its head.[2] When Nyoze Octo escaped from his false conviction and became a fugitive, one of the other Tasan Party members allowed him to use his name as an alias.[3] At some point, the group reestablished itself as a political party, entering USE politics.[4] After the criminal Heleus Gone was given a reduced sentence for his murder of Asmodean's imperial prince in EC 982, the party openly criticized the decision.

In the same year, the party also began backing Levianta's anti-war movement.[5] It also started collaborating with Nemesis Sudou, a former assassin of the Dark Star Bureau's PN espionage force.[6] The following year, the party received a tip that Dark Star Court Director Gallerian Marlon had taken a bribe from General Tony Ausdin to exonerate him for his massacre of Zenosai village. Trying to have the judge indicted, the Tasan Party called for the World Police to take action but was ignored. In response, the party leaked evidence of Gallerian's corruption to the press, enraging the citizens and causing the start of the Leviantan Civil War.[5]

Following the civil war, the Tasan Party began gaining power both locally and internationally. After Nemesis was released from prison in EC 989, given a reduced sentence for her crimes in Zeus due to the party's influence,[7] she rejoined the organization and became elected as its vice leader. Following Gammon's sudden disappearance, Nemesis gave him up for dead and took over his position.[8] With the increasing influence of the Tasan Party over the Elphegortean goverment, when Asmodean was annexed by Elphegort in EC 992 it was renamed "Tasan-Elphegort".[9]

In EC 993, the party secured control of the Elphegortean government and Nemesis herself became the Green Country's dictator. Afterward, Führer Sudou ordered the invasion of the neighboring Lucifenian Republic, prompting the USE to expel Elphegort as a member state and declare war on the nation. The Tasan government then forged military alliances with Beelzenia and Jakoku. In response to the USE's two-front offensive on Elphegort, Nemesis ordered the Elphegortean military to secretly develop a new weapon: Punishment.[10]

Following two successful tests of the Punishment prototype in EC 998, special forces from Maistia, including former PN members, launched an attack on Tasan Party headquarters to try and prevent its further usage. The attack took out several Tasan Party officials until it was suppressed.[11] In EC 999, Nemesis unleashed the weapon upon the entirety of the Third Period, ending the Tasan Party along with all other life in the world.[4]

After the Third Period's destruction and subsequent merging with the Hellish Yard, souls dressed in the uniforms of the Tasan Party began to congregate around the site of Evil's Theater, listening to an address from their former president Gammon Octo.[12] As Gammon tasked them with hunting down certain contractors of the Demons of Sin, the soldiers split into different groups and set out, eventually having Sleep Princess in Toragay put the souls in Evillious to sleep using her Gift.[13]

Eventually, one group of soldiers tracked down Riliane Lucifen d'Autriche to the Lucifenian Royal Palace, although she evaded her capture. They then waited for Black Box to arrive as they carried out an assault on the royal palace. After being sucked inside Black Box and being subsequently freed, the soldiers lost their will to fight.[14]

Meanwhile, at least two other groups of soldiers were dispatched, with one heading to Asmodean to capture Sateriasis Venomania. Failing to find him there, the group left. The other group of soldiers, armed with their own Black Box, traveled to Beelzenia in search for Banica Conchita, although they were soon after defeated by Eater Sabella.[13] Later on, the soldiers remaining underneath the theater spotted Riliane, Sateriasis Venomania and Kayo Sudou attempting to fly in, shooting at them before being subdued by Hanma Baldured's ice magic.[15] After Ma's defeat, several soldiers from the party stayed behind in the Third Period and continued to start fights with the other souls.[16]

During its time as a political party, Tasan maintained a single elected leader as its head, under whom was the vice leader. In the case of the current leader's sudden disappearance, the party's vice leader would replace them as head. After seizing control of Elphegort's government, the party was led by a dictator known as a Führer,[10] who likewise had several officials serving under them.[11] By the world's end in EC 999, enough soldiers composed the Tasan Party to make up a sizable army.[17]