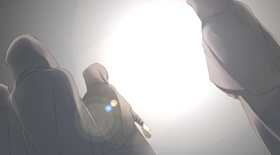 The Special Maneuvers Task Force[note 1] was a division of the Marlon military dedicated to espionage and assassinations in the interests of the Marlon Royal Family. Comprised solely of female operatives, the organization's masked members specialized in intelligence and acted as special forces for the royal family in various matters.

Sometime after EC 482, Abyss I.R. received permission from Queen Prim to develop facilities for the Kingdom of Marlon. Over the years, the sorceress developed the project and had numerous women trained for infiltration and spying; out of the group, a select four were trained to specialize in assassinations.

Once the task force was established, the masked members were sent on numerous missions in the service of Abyss and Prim, with excellent success. Impressed by its capabilities, Prim expanded their authority within the government and employed them for her personal devices.[1] In EC 487, Abyss and several of the task force's members approached Leonhart Avadonia's temporary house during the Lucifenian Expansion War; attempting to take his daughter Germaine, they were defeated by the swordsman.[2]

"The Special Maneuvers Task Force is supposed to be better than this."
"Our abilities should not be used to fight directly on the battlefield."
―King Kyle and Head of Espionage Ney[src]

In EC 502,[3] the task force was handed over to Prim's son, King Kyle, in order to assist Kyle's Witch Hunt. Under Prim's conditions for lending the group to Kyle, they were given absolute permission in all matters regarding the Witch Hunt and were headed by Abyss I.R.'s personal choice: Ney Phutapie. With Ney's guidance, the organization helped hunt down those blacklisted by Kyle.

In EC 505, Kyle assigned the task force command over Retasan Fortress for Marlon's invasion of Beelzenia. Following the initial invasion, the task force confirmed Witch Hunt targets Gumillia and Germaine Avadonia were present in the Empire. After Beelzenia's counterattack broke through their stalemate and began assaulting the fortress, its commander, Ney, escaped after learning both targets left the Beelzenian Empire.

Following their report to Kyle at the royal palace in Lucifenia, the task force was stationed as a garrison unit there for the King while Ney returned to Marlon for Abyss I.R.'s instructions about the Glass of Conchita.[1] A little over two weeks later, a squad discovered Kyle's masked Almoga Mobarez guests were actually Germaine and Gumilla, and then attempted to blow them up in their guest room during the night.

When the attempt failed, the squad pursued them throughout the palace. Once they caught up with Germaine in Kyle's bedroom, they attempted to bomb her again while she was cornered. With the swordswoman again surviving the blast, the task force squad surrounded the swordswoman when Kyle entered and demanded they stand down. After the King collapsed and Germaine attempted to escape, Kyle's aide Clive demanded they go after her and the squad pursued Germaine out the window she broke through. The swordswoman eventually evaded them.[4]

Later on, the group retreated to Marlon; they then followed Ney and Queen Dowager Prim to Castle Hedgehog and participated in the ensuing battle. During the fight, the assassination squad set up an ambush in the courtyard while Commander Ney led Kyle and Germaine to the area. Attacking the group, they were eventually subdued by Germaine and a few other soldiers.[5]

After the battle, with their commander captured and the Queen killed, the remnants of the Special Maneuvers Task Force scattered and went into hiding. In the ensuing weeks, the group was hunted by the Marlon army, though its members managed to remain at large during the duration.[5]

Existing as a division of the Marlon military, the Special Maneuvers Task Force was solely composed of female spies. It also maintained a single commander as its head and served the Marlon royal family. Aside from this, the group contained four members who specialized in assassination. Due to the influence of Queen Dowager Prim, the task force's influence expanded within the Marlon government.[1]

The task force as seen in The Daughter of Evil: Praeludium of Red