The Evillious Chronicles Wiki
Register
Don't have an account?
Sign In
Advertisement
in: Characters, Characters Represented by Yowane Haku, Humans,
and 13 more
English

Shiro Netsuma, codenamed No. 1, was general of the USE military and a member of PN. Worshiped and almost sacrificed by the Sisters of Clarith due to her appearance, the Netsuma eventually fled to Zenosai village and became a sniper. Later joining PN, Shiro helped the organization orchestrate the demise of Loki Freezis before enlisting in the military as well as working as an assassin under Judge Gallerian Marlon.

Born sometime in the mid EC 900s, Shiro was worshiped by the Held sect due to her resemblance to Saint Clarith and was believed to be a reincarnation of her. After almost getting sacrificed as a martyr by the Sisters of Clarith, Shiro fled from her birthplace and came across the Netsuma village of Zenosai. Adopted by a sniper, Shiro eventually convinced him to train her. Despite his worries, the Netsuma progressed under his tutelage and accompanied him out on battlefield on her own volition. During the time she trained, Shiro's confidence grew and she was able to make friends, namely Owa and Mido.

After making enemies with Asmodean, Shiro was forced to go to Maistia to save one of her friends and her father. While there, she managed the save her friend but not her father. After that, she decided to not return to Zenosai and stayed in Maistia. After a civil war broke out, she became involved and was hired to become a bodyguard by the Freezis Conglomerate. She then encountered the family's servant, Bruno Zero and befriended him.[1] Bonding over their respective experiences with discrimination, Shiro fell in love with Bruno, although being too shy to confess. After Bruno formed PN, Shiro joined the organization, becoming acquainted with her comrades Hel Jaakko and Feng Li.[2]

In winter of EC 960, Bruno had Shiro stand by in Pixie in preparation to save the young Gallerian Marlon from Loki Freezis, PN hoping to make Gallerian their front man. As Loki hunted Gallerian through the snow fields, Shiro shot Gallerian in such a way as to give him the appearance of being dead. With Loki convinced his prey had been killed, Bruno had Shiro take the "corpse" to Lunaca Labora, where Gallerian received medical treatment. She soon found him awake; as Gallerian began questioning her, Shiro could only shyly and awkwardly apologize until Hel came in to explain Shiro's confidence issues.

Gallerian was later recruited into PN with the intent to help them take down Loki. After Loki was trialed for the massacre of his slaves and sentenced to thirty years imprisonment in EC 962, Bruno approached Shiro and asked her to kill him for him as revenge for what the Freezises did to him and his family. Shiro obliged and they made up a plan; Loki would be sent a gun with which to kill himself, if he did not follow through, Shiro would shoot him.

The next morning at 2 AM, Shiro watched over Loki's prison cell as the gun was delivered, noticing he wasn't going to go through with it. When the man walked up to the cell window and swore to get his revenge against Gallerian, Shiro shot him in the head.[2]

"There is someone... on the other side of the fog."
―Shiro spotting Postman[src]

Later on, Shiro became a general for the USE army, hiring Hel as her deputy. She was also appointed head of PN, which then became the Dark Star Bureau's private espionage force. In summer of EC 976, she and fellow soldier Tony Ausdin had problems with undead soldiers and went to see Gallerian in hopes of obtaining Ma's help with them. After being greeted by his daughter Michelle, they met with Gallerian and explained their situation. Shortly after, Gallerian received a letter from one of his servants, Katerina, that was written by Ma.

Shiro later led Gallerian, Bruno, and Tony through the Misty Mountains while looking for Ma. They eventually encountered Postman, Ma's subordinate, who silently showed Gallerian and Bruno to Ma while Shiro and Tony went looking for a way out. They were later informed that a troupe was waiting for them in the Babul Desert.[1] When the news of Michelle's death in the Titanis sinking came in EC 978, and after the World Police declared it an accident, PN was forbidden from investigating.

Bruno then gathered Shiro, Hel, Feng and Postman and called for their old organization "Père Noël" to be taken up again and investigate the death of Michelle. Shiro did not object and once again took up her codename No. 1. Two months later, Shiro, Bruno, and Postman set out to the Millennium Tree Forest to look for a member of Zeus who had instigated the sinking of the ship, Shiro using her pass from the Sisters of Clarith to enter the forest.

After arriving at a woodcutter's house, they questioned the woodcutter on the Zeus member until the forest's branches suddenly began enveloping the cabin; despite Shiro's attempts to shoot the branches away, they remained trapped until Sickle secretly convinced the forest god to let them go. After they properly interviewed the woodcutter, they managed to get to the house of the Zeus member, only to find it empty save for a doll that looked exactly like Michelle. As Bruno and Shiro went to continue their search, they ordered Postman to take the doll back to Hel.[3]

Continuing to pursue the Zeus member, Shiro and Bruno eventually caught up to her, Shiro trying to shoot her and Bruno reminding her that they needed her alive. Encountering Hanma Baldured as well, who helped turn them arrest the girl, revealed to be Nemesis Sudou.[4] When Nemesis was later integrated into PN, Shiro bonded with the girl despite not speaking much to her. She later taught her how to shoot for her own self-defense; although not intending for her to become an assassin, Nemesis ended up becoming a skilled assassin for PN.[5]

After war broke out across Evillious in EC 982, Shiro stopped Tony and Colonel Mars on their way to Asmodean in February of the following year, explaining they'd have to wait there due to the thick snow. When Tony suggested they'd stay in the nearby Zenosai village, Shiro revealed her past there and they left for the village.

After arriving at Zenosai with Tony, Shiro was reunited with Owa and Mido once again, catching up with the two by the riverside. After suddenly hearing a cry of panic from Tony, Shiro turned to see a Netsuma girl holding a lit stick of dynamite. As she ran towards them, the stick exploded, burning her leg, but leaving Tony unharmed. When the panicking Tony gave the order to slaughter the village under the assumption that they were agents for Asmodean, Shiro protested and tried to limp over to him but wound up accidentally shot by him instead. She died, crying out Bruno's name with her last breath.[6]

Following her death, Shiro's soul was sent to the Heavenly Yard and remained there. In EC 999, she and the other souls were pulled back to the Third Period as the ground world merged with the Hellish Yard.[7] When all the souls of the Third Period started singing the Clockwork Lullaby to restrain Ma, Shiro eventually joined in their singing.[8]

"That was... an accident. The gun just went off. Please believe me."
―Tony Ausdin regarding Shiro's death[src]

Following her death, Tony was charged with her murder as well as the massacre of Zenosai village. Tony would later insist to Gallerian that Shiro's death was an accident and that he was innocent. After Gallerian acquitted Tony, Hel and Feng were outraged by the judge's decision and quit being members of PN. Bruno later condemned Gallerian for his actions but continued serving the judge.[6]

Meanwhile, Nemesis used Shiro's instruction on marksmanship to kill many of her enemies using guns, even killing her lover Nyoze with Shiro's Naga Custom 44.[9] Before the Leviantan Civil War, Nemesis visited Shiro's grave and later shot Tony Ausdin expressly to avenge her mentor.[5]

Shiro was a shy but strong-willed woman, devoted to her friends and comrades despite her lack of self-confidence. Due to almost being sacrificed early in her life, Shiro was traumatized by the experience and developed a nervous temperament.[3] Over time, however, Shiro's courage grew as she learned how to become a sniper; as a result, the Netsuma drew confidence from her shooting skills and would become more bold every time she held a gun.[10] However, Shiro's trauma stayed with her into her adulthood, causing her to be sensitive regarding her past.[6] She also retained her shyness, often stammering and apologizing whenever spoken to.[10]

Despite her shyness, Shiro was loyal to both her adoptive father and her friend, journeying to Maistia in order to save them.[6] After joining PN, Shiro also became loyal to her fellow members, accompanying them on their missions and contributing her skills to help them achieve their objectives. Coinciding with this loyalty was a strong sense of justice; despite being employed by the Freezises, Shiro saw the immorality of their ways and joined PN out of her own sense of right and wrong.[2]

"On the battlefield and in places of strife at least, there is no one more reliable than Shiro."
―Bruno Zero[src]

Shiro was an extremely skilled sniper, able to shoot targets from afar with incredible precision; her aim was accurate enough for her to be able to shoot Gallerian in the chest and stop his breathing without killing him.[10] Aside from this, Shiro was a competent soldier, allowing her to fight against corpse soldiers and attain the rank of general in the USE army. However, Shiro was inhibited by her shyness and lacked communication skills, needing someone to assist her whenever she talked to people.[1]

Bruno Zero: Shiro's colleague in PN. Shiro bonded with Bruno due to both of them experiencing discrimination in their lives, Bruno as a former slave and Shiro as a Netsuma. She over time developed a crush on Bruno and would do anything he requested of her, although she was too shy to tell him, dying with his name on her lips.

Hel Jaakko: Shiro's colleague in PN. Shiro and Hel were on good terms, with Shiro trusting Hel to manage her affairs in regards to communicating with other people. She was embarrassed, however, when Hel would jump to her defense from others.

Tony Ausdin: A fellow solder in the USE and Shiro's murderer. Shiro and Tony presumably worked well together over the course of their service, until Tony's panic during the war led to her accidental death.

Nemesis Sudou: A girl under Shiro's care and an eventual colleague in PN. Despite not speaking to her that much, Shiro nonetheless instructed her in the use of firearms and bonded with her over the course of their time together, their relationship being strong enough that Nemesis sought revenge on Tony for killing Shiro. 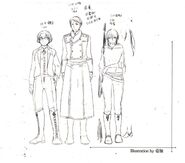 Concept art of Shiro in Deadly Sins of Evil: Judgment of Corruption

Shiro as she appears in Master of the Heavenly Yard

Shiro as she appears in Deadly Sins of Evil: Judgment of Corruption