For other uses, see Deadly Sins of Evil (disambiguation). 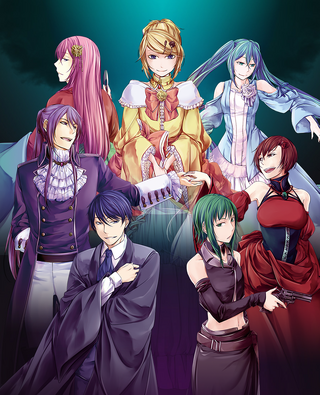 The Seven Deadly Sins Series,[note 1] also known as the Deadly Sins of Evil[note 2] series, is a multimedia series conceptualized and developed by Akuno-P. It belongs to mothy's larger Evillious Chronicles. Building upon his first major success with The Daughter of Evil, its first song, mothy has expanded upon the story with numerous songs, books, and manga. The tale describes the events caused by the "vessels of sin", seven demons possessing seven individuals in order to spread malice.

The series is set in Bolganio, a fictional continent in the series' world, with most of its major actions taking place in its western region, Evillious. The main storyline occurs throughout the Evillious timeline from the early EC 100s until the later EC 900s. Over the course of the story's history, the politics, technology, and culture of each country evolves and numerous countries are formed or destroyed during the course of the series. Many of the characters travel to and from these numerous countries throughout the plot and their politics plays a large role in the events taking place. 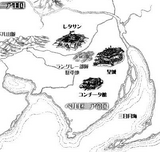 An empire originating in the south of Evillious. It was also known as the "Red Country" or the "country born under the new moon". In the century after the Magic Kingdom Levianta's destruction, Beelzenia conquered territory farther north and controlled two-thirds of the region's landmass at its height. In the centuries afterward, both Asmodean and Lucifenia declared independence and Beelzenia swiftly declined.[1] It was later attacked by the Kingdom of Lucifenia during King Arth's rule and lost much of its territory.[2] It is the nation of origin of the Gula plague across the region.[3]

A state in the mid-west of Evillious. It was once a Beelzenian territory before declaring its independence in EC 399 and became the Kingdom of Lucifenia.[4] Under the reign of King Arth I and later Queen Anne, it became the most powerful nation of its era, but swiftly declined under the tyranny of Princess Riliane.[2] After it was ruined by the revolution that broke out due to its war with Elphegort,[5] it was incorporated as part of Marlon's territory for the following decade;[6] its sovereignty was then returned to it and the state established itself as the Lucifenian Republic.[7] It later became part of the Union State of Evillious.[4]

A state north of Lucifenia. It was also known as the "Green Country".[8] Due to the Millennium Tree Forest lying between both nations, Elphegort was protected from Lucifenia's conquests until the "Green Hunting" caused by Princess Riliane.[9] Its people were characterized by their green hair; implementing strong nationalist policies, the natives heavily discriminated against foreigners. Their sacred god Held resided in its forest as the "Millennium Tree",[10] but was later replaced by the "new Millennium Tree" sometime after the Lucifenian Revolution.[7] It later became part of the Union State of Evillious.[4] 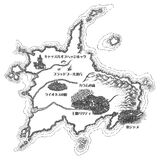 A state on the Hark Sea west of the Evillious mainland. It was also known as the "Blue Country". Armed with the strongest navy of the region, the nation originally competed with the Lioness country over the island but later gained hegemony over it.[11] Marlon was allies with the Kingdom of Lucifenia and incorporated it as part of Marlon's territory after the Lucifenian Revolution for ten years.[7] It waged war with Lucifenia's neighbors but stopped after the death of Queen Dowager Prim. It later became part of the Union State of Evillious.[4] 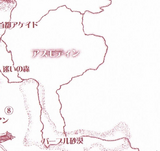 A state along the eastern border of Evillious. Asmodean was originally part of the Beelzenian Empire and was the staging ground for many of its wars.[11] Due to its geographic location, the territory became rich in Eastern culture. Less than a century after the Venomania Event, it established its own independence.[4] Although competing with Lucifenia in the past, it lost momentum during its war with the Kingdom of Lucifenia.[1] Numerous mercenaries were exported from the state.[6]

A state north of Elphegort and the religious capital of the Levin church.[9] Rebuilt from the centuries-old ruins of the Magic Kingdom Levianta as "Holy Levianta", the new nation was a shadow of its former glory.[10] It held an alliance with Elphegort but remained neutral during the nation's war with the Kingdom of Lucifenia because of its weak military.[9] In EC 508, a faction of the church formed Neo Apocalypse and caused terrorist strikes across the country but were later subverted.[7] It later became part of the Union State of Evillious.[4]

A powerful nation formed from the Lucifenia, Elphegort, Levianta, and Marlon countries. It was created after the four nations signed the Aishikeru treaty. The Union State of Evillious became one of the largest nations to exist in Evillious history.[4]

An island nation in the eastern region of Bolganio, far from Evillious.[7] It largely isolated itself from Evillious, conducting limited trade with some nations before being opened to the western world.[12] It had a unique culture, including items like the kimono and katana that, on rare occasions, appeared in the western region.[13]

A state located west of Marlon. Existing in a continent of the same name, it was discovered and colonized for trade by the Evillious nations. It later rebelled against Marlon and declared independence in EC 776.[14]

A state on the Hark Sea off the west coast of the Evillious mainland. It once competed with the Marlon country over the island but was eventually conquered before the EC 500s.[3]

A state in the southwestern area of Evillious. Once known as the mighty Tasan Empire, it originally rivaled the Magic Kingdom Levianta, before later splitting apart due to infighting, forming Ra Tasan and Re Tasan. Afterwards, the entire territory was swallowed up by the growing Beelzenia Empire; it continued to exist in name around the area.[3]

The vessels of sin[note 3] were seven relics inhabited by a Demon of Sin. Because of the individual demons dwelling within them, each vessel has unique magical powers. Using the vessels, their owners could wield the powers of the demons dwelling in them; however, the demons were able to possess those who came in contact with the vessel and influence their personality and actions.[3] While a demon could possess an individual, their essence remained in their vessel; as a result, the demon could be magically sealed and trapped inside the vessel, nullifying the vessel's effects.[10]

The Venom Sword[note 4] was a Jakokuese sword with the language inscribed on its sheath inhabited by the Demon of Lust.[15] Those possessed by its demon acted impulsively, disregarding sensibility and virtue. The sword allowed the user to change a person's face or memory with its power. The owner could captivate those of the opposite sex with lustful infatuation; as part of a demon contract, the user's libido was increased but they also needed to regularly ingest life energy via sexual intercourse.[11]

The Glass of Conchita[note 5] was a red wine glass inhabited by the Demon of Gluttony. Those possessed by its demon had an increasingly abnormal appetite. The glass allowed the user to conjure a "Gula" pathogen and reanimate the dead. When contracted to the demon, the user could change their body's figure to a slimmer form and devour anything with rarely any damage to their health.[3]

The Four Mirrors of Lucifenia[note 6] was inhabited by the Demon of Pride; although originally a single mirror, it was split into four individual hand mirrors. Those possessed by its demon became more confident in themselves and act increasingly arrogant and self-indulgent. The demon could freely travel between any of the mirrors, making it impossible to trap unless all four mirrors were sealed.[10]

The Clockworker's Doll[note 7] was modeled after the appearance of the Original Sinner, Eve Moonlit, inhabited by Eve herself as the "Demon of Sloth". Eve originally used Mikulia Greeonio and her ancestors as her vessel before migrating to the doll. The Doll could cast a hypnosis upon its surroundings to make it be perceived as a normal human girl modeled in Eve's image. The hypnosis also affected Eve, causing her consciousness to "sleep" while living out the life of her current incarnation.[16]

The Twin Blades of Levianta[note 8], later became known as Kayo's Scissors[note 9] was inhabited by the Demon of Envy that were eventually reforged into two pairs of scissors.[7] Those possessed by its demon became envious of others and obsessively coveted what they had.

The Marlon Spoon[note 10] was a spoon inhabited by the Demon of Greed. Those possessed by its demon became excessively greedy and valued material possessions above all else. The spoon naturally attracted wealth to itself, blessing its owner with good fortune in business. The spoon also allowed the user to conjure and manipulate blue flames.[17]

Grim the End [note 11], also known as the Golden Key [note 12] was a vessel without a definite form inhabited by the Demon of Wrath. The vessel could change shape with changes in rage, taking the form of a key, knife, sword or bullet.[18] Grim the End could also take the form of organic beings such as octopi or even humans. Those possessed by its demon acted increasingly angry or vengeful. The demon's vessel was capable of injuring the Demons of Sin and inflict damage to those possessed by them.[11]

A mental world[note 13] was a space within an individual's mind that made real all of their memories and emotions. Everyone inside the space also appeared as their true selves because of this. It could be summoned by the second model of Black Box Type S.[19]

After the success of The Daughter of Evil and its subsequent series, mothy posted multiple Vocaloid songs tagged with the Latin names for the Seven Deadly Sins in the years afterward; The Daughter of Evil was later tagged as "Pride" in the series.[20] It has since grown in popularity, with more than half of its songs reaching over a million views on their original Nico Nico Douga posting. As the centerpiece for Akuno-P's interconnected Evillious Chronicles, the series has bridged into every other series, especially the Clockwork Lullaby Series, and gained numerous independent songs related to it. Following the release of the last song in the series, an album featuring all seven songs was announced by Akuno-P for release on February 25, 2015.

After The Daughter of Evil light novel series finished, a sequel series following the events of the other Seven Deadly Sins songs was announced on mothy's blog, published by PHP Institute.[21] Starting with an adaptation of the "Lust" song, the series has released three light novels and one comprehensive databook for the overall story.[22] Although following the events present in the original songs, the light novels expanded upon the existing characters that had appeared or were mentioned in the song PVs, as well as adding new characters and plot details. As of 2014, Deadly Sins of Evil has sold over a million copies.[16] 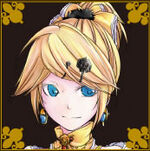 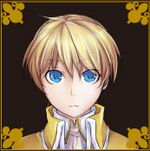 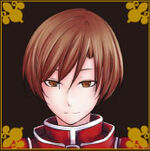 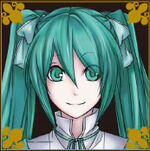 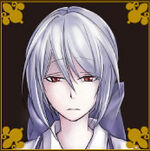 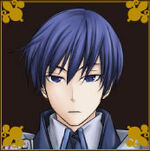 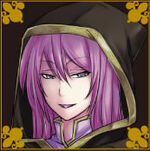 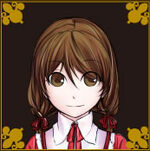 A musical adaptation of the song The Lunacy of Duke Venomania titled The Lunacy of Duke Venomania -Everlasting true love-,[note 14] opened on March 4, 2017.[23] The play was preformed by Drama Troupe Brioche and Moon Cat Set.[24] The screenplay, direction, costume design and choreography was done by Oboro Kurage, who previously worked on the third Evillious-inspired musical The Daughter of Evil ~One for Two~. The music was arranged by Jounetsu-P, who worked on the previous musicals and also collaborated with mothy to compose the song Red Shoe Parade. It was produced by the Moon Cat member Modan.

A musical adaption of the song Evil Food Eater Conchita titled Evil Food Eater Conchita -Can I Eat This?-, opened on December 8, 2018. The play was likewise preformed by Drama Troupe Brioche and intended as a sequel to -Everlasting true love- and the second part in the musical series adapting the Seven Deadly Sins Series. It was produced and written by Brioche member Suzune and co-written by member Suzumushi. The lighting was done by Shiramizu Asakura, sound was done by Mikoto Usami. It was directed by the Zero's record member Asami Hamada. Just like most previous musicals, the music was rearranged by Jounetsu-P.

Seven vessel owners as they appear in the Evils Forest booklet 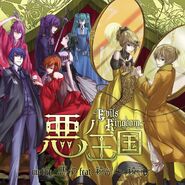 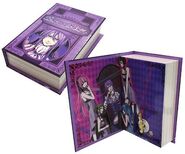 Advertisement image for the music box