Deadly Sins of Evil: The Muzzle of Nemesis

Seven Crimes and Punishments is a story included in the limited edition version of an album of the same name, released on February 25, 2015. The story was written by Akuno-P. It follows Allen Avadonia after the annihilation of the Millennium Tree Forest by "Punishment", sent on a journey to meet the souls of individuals involved with the vessels of sin by Sickle.

The story opens with a text from the Book of Genesis in the Old Testament of the Levin bible, describing how, in the beginning, the gods had lived in paradise before fleeing during its destruction and founding a new paradise, which lasted only a thousand years before being destroyed by Malice.

The surviving four gods and their sixty-eight kin began creating a new world until only the four gods and six of their kin remained. The sun god then banished and sealed away the twin gods and six kin, leaving the world to its creatures while it went into the sky and the earth god slept on the land.

Allen Avadonia then recounts how he memorized these biblical verses from the boredom of waiting for five hundred years in Black Box under the sun god "Sickle's" instruction. After the world's sudden destruction by "Punishment", the box is opened and Allen is greeted by Sickle. After flying out of the box, Sickle recounts that all the souls have been dragged down to the Third Period as it merges with the Hellish Yard. The god then tasks Allen with reviewing the history of certain individuals possessed by the Demons of Sin for his plan to restore the souls to Heavenly Yard.

Sent to visit Held and Michaela, Allen broods on his former crush; in response, Sickle chastises the child and points out his faults before Allen departs via Black Box. The former servant apparates at the seemingly restored Millennium Tree Forest; inside, Allen is greeted by a robin, Michaela, and a disembodied Held and the latter explains that they were seeing an illusion of the forest derived from their memories. Afterwards, Michaela leads Allen to her Millennium Tree body and summons the vessels of sin. Although Allen tries to speak with Michaela privately, she hurries him to continue and the boy acquiesces, taking the Venom Sword.

The boy is then greeted by the Demon of Lust; the two chat before the entity takes Allen's consciousness to the remains of Asmodean.[1] The story then recounts the incident caused by Duke Sateriasis Venomania in life, leading up to his death by a vessel of sin. Arriving in Lasaland, Allen is directed to Venomania's mansion and enters with the demon, meeting the lord of the manor surrounded by women. Duke Venomania attempts to drive Allen out before being stopped and realizing who he is.

Sateriasis discusses with Allen his having a harem despite losing his brainwashing power, albeit much smaller, and the two argue over their viewpoints of his lust. Allen then converses with Maylis Beelzenia despite Sateriasis' protests. After speaking to Maylis over her complex feelings for the Duke, Allen prepares to leave; before he does so, Sateriasis requests that he send I.R. to him. Allen agrees, despite knowing the sorceress' true nature has since changed entirely.

Exiting the mansion, Allen encounters Gumina Glassred about to enter and greets her. Although attempting to talk to her and advise the former prime minister on her relationship with Venomania, Gumina brushes the boy off and goes inside. Allen argues the necessity of leaving early with the Demon of Lust, before the two are greeted by his next guide, Hänsel in the guise of Pollo, to Allen's shock. After explaining that the Demon of Gluttony couldn't meet Allen after being eaten by Banica, Hänsel grabs the other boy's arm as the Demon of Lust leaves and takes him to Beelzenia.[2]

Brought to the site of the Conchita Mansion, Allen eventually speaks with Banica over their past history before the former Duke brings up the topic of his mission from Sickle. In response, Allen questions her over her motivations for becoming a demon and her actions as the Demon of Gluttony, before Banica in turn questions him over the sun god's plans. Afterwards, she prepares to rest and directs Allen to visit Arte. The servant then goes into the room where Hänsel and Gretel are staying and speaks with Gretel, who takes the form of Ney Phutapie as she talks with him.

After telling Allen to give Riliane her regards, Gretel hands him the Four Mirrors of Lucifenia and the Demon of Pride takes him to the former site of Lucifenia.[3] After finally arriving at the site of the Lucifenian Royal Palace, Allen steps inside and meets with Keel, speaking with him before Chartette forces him to help with preparations for the night's dinner party. After all the preparations are met, Allen watches as a gigantic cake is presented and Riliane bursts out of it. Shocked, Allen observes Germaine chastise and chase away the princess for ruining the cake, the servant soon chasing after his twin sister.

Losing sight of Riliane, Allen thinks to check her room and outside it reunites with his mother and father. The two talk over Allen's current situation before finally Allen prepares to enter Riliane's room; at that moment Arth and Anne both collapse due to Gift, followed by the rest of the palace. Allen is then met by Clarith acting in Michaela's interests, who explains that "Sleep Princess's" Eighth Gift is the cause of the souls in the Hellish Yard falling asleep. She convinces Allen to go with her to stop the Sleep Princess and the two of them ride off on Josephine.[4]

Before reaching Toragay, the two encounter Hänsel now in the form of Lemy Abelard. Although offering his aid, he's repeatedly denied until he offers to give them the now empty Clockworker's Doll. As Allen acquiesces, Hänsel shows him how the doll is now burned and empty; the three of them then set out, Hänsel promising to catch up to them. Clarith and Allen then move out on Josephine until arriving in Toragay, meeting with the "Sleep Princess" and unable to reason with her. At a loss, Allen tries to approach the soul and is almost put to sleep before Hänsel reappears and traps Sleep Princess in the Clockworker's Doll.

Afterwards, Allen bemoans his uselessness in the confrontation before Hänsel cheers him up and leaves. Allen is then approached by the Demon of Envy and the two converse. After saying farewell to Clarith, Allen rides on the Demon of Envy through the water to reach Jakoku.[5] After approaching the island nation, the Demon notes a distortion in space and time causing them to arrive too early. Entering Enbizaka, Allen seeks out Kayo Sudou but is unable to make his way up to her with the space-time distortions.

Meeting the Demon of Greed, Allen negotiates with the demon until it helps him reach Kayo and he greets the tailor. He converses with her until Kayo notes she has to perform an errand and leaves towards a western-styled building, speaking about receiving judgment. Following behind Kayo, Allen enters into a courtroom and sees a man about to begin a trial for Kayo Sudou, Gallerian Marlon.[6]

Watching the trial, Allen witnesses Kayo found guilty and determined to be decapitated on a guillotine. Panicking at the thought, Allen begs the court to stop and is approached by Gallerian. The judge relents on punishing Kayo in exchange for a price; with Allen having no money, Gallerian decides to have him take her place. Before he's placed on the guillotine, "Michelle" intervenes, having Gallerian put on a proper trial for the boy with her as defense; Allen then realizes the doll is actually Hänsel using ventriloquism.

Before the trial can begin, Gallerian is approached and chastised by a woman wearing a mask over her face, who then sends the judge back into the ground. The woman then prepares to take Kayo away before being addressed by Allen. Explaining her purpose to return individuals like Venomania and Gallerian back to their original locations, she notes Nemesis is the only one left for her to collect and sends Allen through a hole to meet with the girl first.[7]

Dropped into the Grave Yard for the technology of the Second Period, Allen inquires about the nature of the place from Hänsel and search out Nemesis, wandering through several Black Boxes. Coming upon the former dictator on the viewing platform of a clocktower, the two eventually approach Nemesis and learn she's looking for her mother; questioned, she reveals her belief that she had destroyed the hell called "Evillious" and how she was killed by a boy like the two of them.

Growing afraid, Nemesis flees, Hänsel and Allen in pursuit. Losing track of Nemesis, the two instead find a tree with red fruit on a hill; as they scale the hill, they encounter Irregular, who recognizes the Clockworker's Doll as his mother. Attempting to take the doll, Hänsel keeps it away from the boy and they eventually run, chased by Irregular; once they reach the tree they discover a fourth boy, separate from Irregular, beside Nemesis. As Nemesis puts the golden key in Punishment, Allen snatches it from her, only for the fourth boy to tell him he's too late. Everything is consumed by light as the Clockwork Lullaby is heard.[8]

An excerpt from the Levin Book of Revelation describes how the world created by the four gods may meet its end in four different ways, under the four Masters. Allen, greeted again by Sickle in the Black Box, exits to the rice fields and is told that it's his turn. He plans to return to the ground world again in order to see Riliane. His narration concludes that they shall now aim for a new beginning.[9]

While Allen meets with Kayo and the other succeeding contractors, the Demon of Envy, Rahab, secretly meets with Gilles, the Demon of Lust, in the Court dimension. Gilles recalls his actions and motivations as a demon, and then questions Rahab on the whereabouts of the "moon goddess" Luna Hazuki, whom Rahab explains is still alive somewhere. Their conversation is soon after interrupted by the light of the Punishment boy.[10]

Back cover of the story

E-book version of the cover

Princess Riliane jumping out of her giant cake

Gallerian talking down to Allen in court

Nemesis Sudou being stopped from using the Golden Key 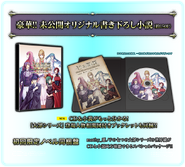 Sample cover of the album CD and limited edition booklet