Nanatsu no Tsumi to Batsu!

For other uses, see Seven Crimes and Punishments (disambiguation)

Sickle wakes Allen Avadonia from his slumber in Black Box to recruit the contractors of the Demons of Sin to pose for the new album jacket. The two then discuss if Sickle should be included. After the god changes, Allen confirms that his human form is too magnificent for the camera to handle.

Approaching Sateriasis Venomania, Sickle persuades the Duke by mentioning that there will be cute girls involved. They then move on to Banica Conchita. Once she realizes that Sickle is the sun god, she grabs him and ponders what a god would taste like. Although Allen is excited to meet Princess Riliane next, Sickle refuses to let him meet with her yet and recruits the princess while Allen can only watch from a distance.

After meeting with Margarita Blankenheim, Sickle gets his wings pulled by the curious girl. Soon after, they meet and easily persuade Kayo Sudou to take part in the photo, discouraging the bloodthirsty tailor from trying to "find" a new outfit. Gallerian Marlon is then approached by the two and refuses before being bribed with "heavenly dollars". When Allen asks if such a currency even exists, Sickle is unable to respond. Sickle then attempts persuade Nemesis Sudou; in the process, he irritates the former dictactor to the point of threatening to use Punishment on him, causing Allen and Sickle to panic.

Afterwards, the contractors are taken care of by the cameramen and staff as Sickle and Allen watch; during the shoot, Sateriasis mistakes Kayo for Lukana and Kayo threatens him with her scissors. Riliane also searches for Allen, only for Sickle to insist that he can't be found at the moment, much to her disappointment. In the end, Allen prepares to pose with Riliane for the album jacket, only for to Sickle come and tell him that he will be posing with the other demons; as Allen resists, he is dragged away from the contractors by Sickle. 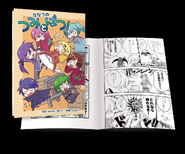 Sample of the manga

Retrieved from "https://theevilliouschronicles.fandom.com/wiki/Seven_Crimes_and_Punishments!?oldid=182070"
Community content is available under CC-BY-SA unless otherwise noted.