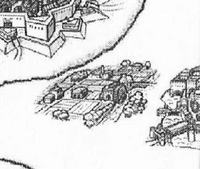 Rucolebeni[note 1] was the original capital of the Beelzenian Empire prior to being moved to the Imperial City to its east. The original site of the Imperial Palace and the Beelzenian Imperial Family, the city declined in later years. Developing a thriving wine business and multiple liquor stores, Blood Grave became among its chief products.

At some point, Rucolebeni was established as the capital of the Beelzenian Empire. With the death of Duke Gastolle during the nation's civil war with Asmodean, the western half of the duke's Re Tasan was incorporated into the imperial family's jurisdiction, making Rucolebeni the center of the newly created Beelzenias region.[1]

Over the centuries, Rucolebeni became known as the birthplace of Banica Conchita's Blood Grave wine, developing a growing wine business. At some point before the sixth century EC, the capital was moved from Rucolebeni to the new Imperial City. In EC 505, the writer Yukina Freezis stayed in the city and visited the Conchita mansion before moving on to the Langley Unit Garrison.[2] Following the annulment of the armistice between Marlon and Beelzenia, Rucolebeni was the first town to be attacked by the invading corpse soldiers;[3] the town was devastated for several days until the soldiers were fought off by the Langley Unit division.[4]

In EC 999, Rucolebeni was completely decimated by Punishment. Following the end of the Third Period, the destruction site merged with the Hellish Yard along with the rest of the ground world.[5]

A bar in Rucolebeni located on the city's first street. Following her move to Beelzenia, the bar was a frequent refuge for Germaine Avadonia to drink.[4]

Vast grapevine fields beside the city that were used in Rucolebeni's developing wine business.[2]

A street in the city that led to Rucolebeni's northeastern gate named after the new capital city. On the street was a bar and nearby were the plains outside the city.[3]

A market in the city where goods and wares were sold; it was noted as having a lesser selection compared to the city of Retasan's.[2]

A hotel inside the city for visitors to stay at.[4]

Retrieved from "https://theevilliouschronicles.fandom.com/wiki/Rucolebeni?oldid=189877"
Community content is available under CC-BY-SA unless otherwise noted.