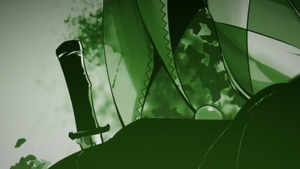 The Rolled Serial Killings,[note 1] later known as the Lemy the Ripper Case,[note 2] was the name given to the killings committed by Lemy Abelard in Rolled, Lucifenia starting in late EC 609. It was one of several incidents investigated with connection to Père Noël, becoming among the most infamous series of crimes in Evillious history.

During the late EC 590s, Père Noël's First Santa Claus and Fourth Shadow recruited the fortune teller Yuzette Ora in Rollam as "Seventh Magician", tasking her with using the Venom Sword given to her to perform face surgeries for profit. In EC 597, Seventh Magician changed the fugitive Kaidor Blankenheim's face to that of the secretly murdered Bruno Marlon. The organization later recruited a new member as "Fifth Pierrot" to act as the chief assassin for the criminal syndicate.[1]

In December of EC 600, Julia adopted Lemy from the local Rolled orphanage and raised him as her own.[2] During an assassination mission at Milanais Theater in EC 606, Fifth Pierrot was interrupted and fled, pursued by the undercover constable Ayn Anchor.[3] Later during the night, Lemy was abducted by two thugs en route to his home before being rescued by Ayn, mistaken for Fifth Pierrot.[2] In EC 607, Fifth Pierrot was shot and killed by Justea investigator Willus Zorach,[4] and Sixth Venom was immediately assigned as his interim replacement.

In December of EC 608, Sixth Venom was tasked with eliminating Seventh Magician and alerted her beforehand; after she fled, he began tracking the fugitive the next day.[1] During the latter half of September of EC 609, "N A", the alleged former manager of the popular diva Rin Chan, claimed Rin was secretly lip-syncing, flaring up rumors and controversy surrounding the singer; shortly after, the diva refused to meet with anyone, claiming to be resting at her manager Ton Corpa's mansion.[5]

On October 5, EC 609, Lemy Abelard snuck into the local Corpa Mansion disguised as a clown for the Cirque de Lune troupe camped on the manor grounds. Around 2:00 AM the next morning, Lemy infiltrated the estate and found Rin Chan locked away on the second floor. After unlocking the door and freeing his friend, Ton Corpa confronted the two with a knife, mistaking Lemy for Fifth Pierrot. Afterward, Lemy disarmed Ton and stabbed him in the back, killing him; he fled with Rin Chan immediately after, taking a carriage to Elphegort's capital city of Aceid.[6]

Around that time, Sixth Venom discovered the murder and abduction;[7] after confirming Lemy perpetrated the crimes, First Santa Claus had a letter claiming Fifth Pierrot's responsibility for the incident sent to the Saintes Fauraux Newspaper that morning. Justea investigator Heidemarie Lorre became involved in the case and began tracking "Fifth Pierrot's" movements.[8] After arriving in Aceid around midday, Lemy and Rin checked in at a hotel. Late that night, Fifth Pierrot took the same carriage from Aceid to the Kiel checkpoint.

After being dropped off at the checkpoint, Lemy headed with Rin to Calgaround and traveled to his "aunt" Mayrana Blossom's mansion.[6] Intercepted by Julia,[7] Rin was left with Mayrana and subsequently imprisoned while Lemy and Julia returned home to Rolled.[9] Around the same time, Heidemarie tracked the carriage driver's home to a local Toragay inn and raided the building, failing to find any evidence linking to Pierrot's whereabouts.[8]

That night on October 6, Santa brainwashed Lemy to join Père Noël as the new Fifth Pierrot, tasked with taking up Sixth Venom's mission to locate and kill the fugitive Seventh Magician. Narrowing her down to being disguised as a prostitute in Rolled, Pierrot began assassinating young prostitutes during the night in search of Magician.[7] After First Santa Claus had Bruno Marlon pressure the World Police, Heidemarie was removed from the case and formally discharged on October 15.[10] By November 26, Fifth Pierrot killed five prostitutes and a letter addressed from the killer was sent to the local Saintes Fauraux Newspaper.[11]

Afterwards, Fifth Pierrot killed two more prostitutes. At the beginning of January of EC 610, Justea investigators Willus Zorach and Ayn Anchor were assigned to investigate the murders. After leaving her last customer for the night at January 3, around 11:00 PM, Eloise Huguenet was confronted by Fifth Pierrot and chased through the city streets. Cornered in an alley on 28th Block the next morning around 2:00 AM, Pierrot stabbed the woman in the chest, killing his eighth prostitute. Around that time, the Justea investigation team arrived in Rolled.

That morning, the Justea officers investigated the scene of Eloise's murder, deducing the killer was searching for a specific person and possibly learned she was a prostitute from his first victim: Ton Corpa. Inferring he was specifically looking for a woman between her mid-twenties and early thirties, the investigation team began looking into the local brothels to determine the murder target's identity, eventually focusing on a prostitute who appeared at a brothel on 7th Block a year ago, Isabel Ismael, as their prime suspect.

On February 11,[7] Fifth Pierrot entered the 7th Block brothel as a customer. Paired with Isabel, Lemy confirmed the prostitute was Seventh Magician before attacking the woman. After a brief struggle, Magician was stabbed in the chest and killed. After the brothel owner, Elluka Clockworker, was recruited the following night, First Santa Claus had the new Seventh Magician falsify Yuzette's cause of death and she was officially labeled as a victim of the Gula Disease, ending the murder spree.[4]

Around May of EC 610, Second Dealer pressured the International Works Department to recall its Justea investigators in Rolled. After receiving the letter of recall on May 17, investigators Ayn and Willus investigated the 7th Block brothel again around 3:00 PM. Questioning the brothel owner, they received access to Isabel's belongings. Discovering work papers among the items, the investigation discovered a connection between Isabel, Kaidor Blankenheim, and Bruno Marlon.[4]

Afterward, investigator Zorach returned to the World Police headquarters in Marlon while investigator Anchor looked into the Kaidor connection. Over the following week, Ayn tracked the lead and found Rin Chan in Aceid. Taking her into protective custody, Rin confirmed Isabel Ismael's connection to the fortune teller Yuzette Ora and Seventh Magician's ability to change faces and cooperated with the police for investigating Fifth Pierrot and Père Noël, though claiming she couldn't make out the assassin's face.

The investigation team reunited a week later and used the information from other cases to deduce a plot by Kaidor Blankenheim to kill the Freezis Foundation vice president Nob Nicole, potentially through Fifth Pierrot. On May 23, around 5:34 PM, the investigators stormed the Lucifenian Royal Palace and arrested Bruno Marlon on suspicion of being Kaidor Blankenheim and having connections to Père Noël. Afterwards, President Julia Abelard began facing scrutiny and investigation from the World Police and public officials for her alleged connection to Kaidor and Père Noël.

On September 2, Seventh Magician met with Fifth Pierrot at an inn on 12th Block with an offer to join her and Eighth Sniper in escaping before their connection to Père Noël was realized. Lemy reported the meeting to his mother the next morning; he and Sixth Venom were then tasked with assassinating the traitors. Foreseeing their assault, Elluka fled with Gumillia before Pierrot and Venom raided her brothel that night.[12]

Later that month, investigator Ayn Anchor returned to Rolled to continue the investigation while Willus Zorach investigated the alleged Pierrot killing of Kaidor Blankenheim from September. Fifth Pierrot later confronted the Justea officer in an alley on 1st Block on December 26, around 2:00 AM. While attempting to escape, Ayn tripped and fell back on the floor and was straddled by Pierrot. As the assassin prepared to kill his next victim, Gumillia shot Pierrot through the heart per Elluka's order, ending the Rolled Murders.[3]

Afterward, Lemy was buried at the local cemetery. On January 26, EC 611, President Julia announced her resignation before disappearing, sending a letter challenging Elluka to confront her at Merrigod Plateau. The same day, World Police Commissioner Hank Harewood held an emergency conference at Marlon Headquarters, announcing they wanted Asmodean Lieutenant General Gatt Coulomb for the murder of Kaidor Blankenheim, the police storming the Abelard estate and arresting the staff later that night.[2]

On January 30, Elluka confronted Julia at Merrigod and the two dueled, leading to Julia's defeat and subsequent arrest by the World Police later that day.[13] Centuries later, USE Dark Star Bureau Director Gallerian Marlon read over the case files for the "Lemy the Ripper" case. A film concerning the incident was later created by Gammon Octo and Ma.[14] Gammon later documented his theories on the incident and Lemy's demise.[14]

Apparently crediting himself for his brutal and seemingly random killings to local media, Fifth Pierrot's actions spread terror across Lucifenia and its neighboring countries. Any killing allegedly perpetrated by the assassin was covered extensively by the Evillious nations' different newspapers, taking the forefront of the region's attention.[11]

Due to the notoriety of his predecessor, Lemy's image as a pierrot in clown makeup struck fear in his victims, becoming iconic to the public image of Fifth Pierrot. The brutal method of his murders were similarly met with shock and horror, earning him the moniker as "Lemy the Ripper" after his death;[15] because of this, police assumed similar murders suspected to be committed by Père Noël were the work of Fifth Pierrot, blurring the assassin's range and full capabilities even more. The local panic in Rolled spread to the point that many avoided the streets at night out of fear of encountering the killer.[3]

While the bizarre case of murders stumped the local police for months, the International Works Department's investigation helped piece together the true intention of Fifth Pierrot.[7] After Lemy's death, the case file for Lemy's murders was compiled and stored for future viewing by judicial officials. Although the names of his killers were recorded, the two women were never properly identified in public records, leaving many aspects related to the case shrouded in mystery and legend.[15]

Retrieved from "https://theevilliouschronicles.fandom.com/wiki/Rolled_Serial_Killings?oldid=190007"
Community content is available under CC-BY-SA unless otherwise noted.