For other uses, see Tasan (disambiguation) 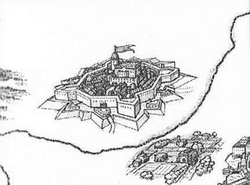 Retasan[1], also known as Retasan Fortress and previously named Re Tasan, was a star-shaped fortress city that belonged to the Tasan Empire before being absorbed into Beelzenia. Over the centuries the city stood as a strategic point for several military conflicts in Evillious, held under several different banners.

After the foundation of the Tasan Empire, the city of Re Tasan was established sometime before EC 0, named after the vassal state it existed in. Later, when the fractured Tasan was invaded by the Beelzenian Empire, the fortress city stood as a strategic point for the newly independent Re Tasan nation as they warred with the Red Country. It was eventually incorporated into Beelzenia along with the rest of the Re Tasan territory.[2]

Sometime after, the Re Tasan territory was renamed Retasan.[3] While under the rule of Princess Aprilis, a rebellion broke out in the territory around EC 131; it was later ended due to the intervention of Elluka Clockworker.[4] At some point, the city along with the rest of the former Re Tasan territory came under the jurisdiction of the Gastolle Dukes, with the fortress located at the center.

After one of the dukes died during the civil war with the Asmodean region, the Duke's Retasan territory was divided between the Beelzenian Imperial Family and the newly christened Duke Tetippea; due to the division, the fortress city lay along the border between the two new territories. After the disappearance of Duke Banica in EC 325, the Conchita territory was absorbed as part of the royal family's Beelzenias region, including Re Tasan Fortress. Sometime after, its name evolved to match that of its former territory.[5]

During Beelzenia's war with the Kingdom of Lucifenia, King Arth I spearheaded an assault on Retasan and eventually conquered the fortress; at the end of the war in EC 490, the city was used to monitor the new border between Beelzenia and Lucifenia.[6] In EC 500, General Gaston and his forces were stationed at Retasan. During the Lucifenian Revolution later that year, Gaston and his forces prepared to depart for Lucifenian before they were attacked en route to the capital. The city later fell under Marlon jurisdiction after Lucifenia's annexation by the kingdom in EC 501.[7]

The city was captured and held by the Lucifenian Resistance the following year as they rebelled against Marlon's rule. In EC 503, Commander Riliane Mouchet countered the former revolutionaries and recaptured the fortress, placing it back under Marlon's control.[8] In EC 505, Retasan was the base of an invasion force sent by the Kingdom of Marlon into Beelzenia, during the kingdom's bid to expand their territory.[9] Beelzenia later launched a counterattack and captured Retasan in the process, reincorporating it into the Empire.[10]

In EC 999, Retasan was completely decimated by Punishment. Following the end of the Third Period, the destruction site merged with the Hellish Yard along with the rest of the ground world.[11]

The central district of Retasan, leading to the Fortress Gate to Beelzenia. The main street was filled with a large variety of shops, houses, and other essential buildings. The street was usually crowded with people, both soldiers and civilians.[12]

A hotel on the city's main street. It was two stories tall and had seven rooms for guests. The lower floor served as a bar and cafeteria, the former of which was well frequented at night.[13]

A hotel in the north end of Retasan. It became weathered with age, giving its visitors a feel for its long history.[14]

The exit to the city and entrance point to Beelzenia, operated by use of a drawbridge to cross the trench surrounding Retasan. The gate was well guarded by soldiers standing by in shifts and passage to the other side was severely restricted.[15]

Retrieved from "https://theevilliouschronicles.fandom.com/wiki/Retasan?oldid=179825"
Community content is available under CC-BY-SA unless otherwise noted.