The Reincarnation Ritual was a magic ceremony that could move an individual's soul from one body to another similar to reincarnation. Being Elluka Clockworker's specialty, it could be conducted via a third party, although an individual could also work a reincarnation technique on themselves.

The ritual's primary purpose was to supply a being with a new body via reincarnation. The ritual's preparations in one case included drawing a magic circle on the ground, preferably in an area astrologically suited to the ritual. The magic circle could be of any quality, noted to just be a formality to the actual magic. The intended target would be positioned in the area of the magic circle and would need to mentally picture their desired reincarnated form. Once the user invoked the ritual with magic, the target's mental picture and memories were used as a basis to construct the new physical body.

During the process, the target could feel their consciousness float into space, before falling immediately back down towards an illusion of their desired body as seen in their mental picture. Once they made contact with their desired body, the target would lose consciousness an their soul incarnated in the new physical body created by the ritual.[1] Like with regular reincarnation, the subject's memories of their previous life would be sealed off when reincarnating into a human in accordance with the rules of the world.[2]

The reincarnation ritual was a powerful technique that was the specialty of Elluka Clockworker.[1] It was also possible, however, for a single individual to use reincarnation techniques to transform themselves, as long as they were capable of casting such magic and ideally casting in a place of magical potency. Reincarnation magic could thus turn a spirit into a human and theoretically turn a human back into a spirit.[3] The subject could thus theoretically be reincarnated into different forms multiple times if needed. Defects or changes could still occur in the new body, however, such as farsighted vision.[4]

Elluka using the ritual in the Deadly Sins of Evil manga 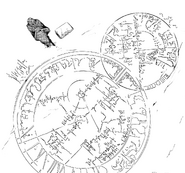 Retrieved from "https://theevilliouschronicles.fandom.com/wiki/Reincarnation_Ritual?oldid=185504"
Community content is available under CC-BY-SA unless otherwise noted.