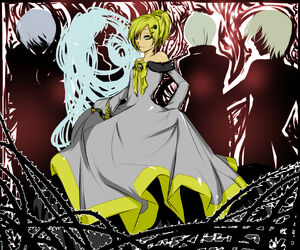 The Reign of Evil refers to the cruel and brutal rule of Princess Riliane Lucifen d'Autriche during her tenure as sovereign of the Kingdom of Lucifenia. Characterized by countless deaths for her own whimsical pleasure, her subjects' suffering increased until she was deposed during the Lucifenian Revolution.

"You know, Riliane... with all this evil, cute Riliane has become like another person. She never showed any interest in it before, but now she suddenly made becoming the heir her goal."
―Queen Anne[src]

Following the death of King Arth I, his son, Prince Alexiel, was named his heir with Prime Minister Genesia selected as the boy's regent. In December of EC 491, Minister Presi came forward to dispute Alexiel's name in the Hall of Sounds, denouncing his legitimacy as the machinations of Queen Anne and the prime minister.

Although met with laughs in the chamber, Presi presented a counterfeit will claiming that Arth had selected Princess Riliane as his successor instead. Shocking many of the ministers, rumors began circulating of the queen and prime minister's immoral deeds and the political argument on both sides caused increasing unrest.

After a failed assassination attempt on Prince Alexiel's life, Presi poisoned the prime minister before being confronted by Elluka Clockworker and Mariam Futapie and subsequently killed after attacking the former. In wake of the incident, Alexiel was publicly declared dead while being sent into hiding as the adopted son to the Captain of the Royal Guard, Leonhart Avadonia. Settling the right of succession, Riliane was chosen as Arth's heir with Queen Anne ruling until she came of age.[1] Raised in the Lucifenian Royal Palace under her mother's guidance, Riliane lived a disconnected life from the outside world. After her mother's death in EC 499, the thirteen-year-old princess was made the ruling monarch of the kingdom.[2]

"The Princess doesn't understand the value of things. She doesn't understand that the meals lined up on the tables of the people every day are far worse than the food given to her beloved horse. That sheltered girl can't even look beyond herself."
―Leonhart voicing his dissatisfaction[src]

Although ascending to the throne, the princess refused to be crowned as queen until she came of age, out of respect for her mother.[3] After instating her as sovereign, the government imposed heavy taxes upon the people and the new ruler began executing anyone for even minor crimes or errors,[4] with the death toll rising as high as eighteen a month.

Around the same time, the poor harvest that swept across the region led to a famine among the general populace. Although the prime minister petitioned for food to be distributed from the palace's storehouses to the citizens, Riliane refused to sanction the relief effort, at one point claiming the hungry could eat cake instead.

On her fourteenth birthday, the princess escaped the palace on horseback through a secret passage in her room to the royal stables, planning to blame the incident on her most vocal critic, Commander Leonhart, and use it as an excuse to execute him. However, she was soon after retrieved by a search party and escorted back to the palace in time for the celebration. During the party, she was presented with an enormous cake, impressing her audience and delighting her.[5]

Following the execution of a noble months later for speaking ill of her, Riliane narrowly avoided an assassination attempt made by a servant and the noble's brother in the Hall of Sounds. In response, he was executed the next day. Traumatized by the incident, the paranoid princess allowed only a select few to ever accompany her and only allowed Allen, the servant who protected her during the assassination attempt, to stay in her room.

Several days later, the princess discovered that Leonhart had been smuggling food from the storehouses outside the palace to feed the citizens. Under the guise of supporting his efforts, the princess called the commander to meet with her the next night. As they discussed future support to feed the Lucifenian citizens, she poisoned her Captain of the Royal Guard via drugged wine. Allen later assassinated him around 3:00 A.M. and the body was disposed of in the nearby river. Although the palace offered a public funeral for the warrior, his foster daughter refused.[6]

Soon after, both the kingdoms of Elphegort and Marlon sent aid to relieve the mass starvation in Lucifenia. The palace sent emissaries to thank their allies for aid. The prime minister sent to Marlon received a letter from King Kyle, Riliane's betrothed, that he had rejected their engagement in favor of a green-haired girl he met in Elphegort.[7] Outraged, the princess sent out an investigation team to uncover the girl's identity but was unsuccessful in providing any more details.[8]

Unable to determine her betrothed's lover, Riliane ordered the prime minister to invade Elphegort and slaughter all the green-haired women to guarantee the girl was dead. After burning the Millennium Tree Forest, the Lucifenian army invaded the country and began the "Green Hunting". During the genocide, the princess learned from another servant that Allen had known the girl's location and willingly hid the information. The tyrant decided to overlook the transgression and ordered the servant to kill her. After her death, the war with Elphegort drew out into a prolonged conflict and the invading forces became entrenched in the nation.[9]

"Moreover, I heard from the mouth of a mercenary that there are disturbing trends. The people seem to look at it as a big deal. I'd be more alert if I were you."
"We did not receive a report in this regard! And you don't take any credit at all!"
"Oh my, it seems the great Lucifenian army is just a name. It would appear that Lucifenia’s days are now numbered."
―Gast Venom and a Lucifenian soldier[src]

Because of the conflict, soldiers and guards were sparse and domestic protection drastically decreased. During one of the palace's balls, an assassination attempt was made on Prime Minister Minis in the Hall of Mirrors, severely injuring him. In response, the ministers debated the correct course of action with the troop shortage.

To strengthen the garrison, the government hired the Venom Mercenaries and allowed its recognized leader, Gast Venom to reside in the palace. The mercenaries soon caused mayhem in the country, pillaging the streets and defiling the women.[10] In the midst of the civil unrest, riots broke in retaliation at Rolled and Rollam. The mercenaries and soldiers stationed there dealt with the fighting while the soldiers stationed in Elphegort were recalled to reinforce them.

As the weeks passed, the revolutionaries gained the upper hand and emergency recalls from different stations were subdued. Faced with the rage of the citizens approaching Lucifenian, many ministers and servants fled from the palace. Towards the end of the year, the resistance army invaded the Heavenly Yard and broke into the royal palace.

Protected by only the royal guard, the princess retired to her room, accompanied by her servant Allen. During the fighting, Riliane swapped clothes with the chamberlain and escaped via her room's secret passage whilst Allen masqueraded as her. The "princess" was then captured in the Hall of Mirrors while the disguised Riliane fled, ending The Daughter of Evil's reign of terror.[11]

"That's right. When the revolution ended, Marlon decided to annex Lucifenia and we were left to fight and resist."
―Chartette Langley[src]

With Princess Riliane deposed and the capital of Lucifenian captured, the Resistance and its benefactors held a peace meeting five days later in the Hall of Sounds of the royal palace. At the meeting, King Kyle spoke as a representative of Marlon and declared the nation's occupation of Lucifenia to guide the rebuilding new government. Despite protests, the attendees agreed to the proposal and concluding that Riliane would be publicly executed to appease the people. On December 26th, the "princess" was executed in Milanais Square in front of a tumultuous crowd.[12]

Within the year, Lucifenia was incorporated as part of Marlon's territories and was faced with rekindled opposition by the members of the Resistance.[13] The fugitive princess eventually collapsed at a nearby port town along the Anonymous Coast before being found and taken into the nearby Held Monastery. Changing her name, the former monarch lived out the rest of her days in solitude as a nun.[14] The revolution resulted in the fall of a tyrant, a resentful Elphegort, and a weakened Lucifenia in preparation for Marlon rule.

"Although I shouldn't be saying this since I was a former commander, but in truth, what the Princess did was far more terrible."
―Former Retasan commander, Riliane Mouchet[src]

The vast majority of Lucifenia's citizens opposed Princess Riliane's reign and were heavily critical of her actions. Due to the mass poverty and starvation, the princess became known as "The Daughter of Evil" among the population and her refusal to attend to their needs further enraged them.

Although public sentiments remained supportive of her rule, a vast majority of ministers were dissatisfied with the child's tyranny and privately voiced their objections to her commands.[15] However, because of foreign aid to relieve the food shortage across the Kingdom, the population was briefly eased.[16]

However, the ensuing Green Hunting rekindled mass opposition and the war with Elphegort became increasingly unpopular.[17] The nobility largely took advantage of Riliane's policies to support heavy taxation of the populace, especially the merchants, fueling dissatisfaction with her policies to the point of supporting Keel Freezis and the Lucifenian Resistance.[18] Because of its strength, the Kingdom's neighbors were cautious of Riliane's policies and rumors spread quickly of her cruelty across Evillious.

To help the people, relief was sent to help feed the hungry and curb Riliane's merciless aggression towards Lucifenia's politicians. Even so, she was considered awful even abroad, with many foreign aristocrats who witnessed the princess' lavish lifestyle despite the people's suffering using her infamous moniker as well.[19] Although never confirmed, it was widely accepted that Leonhart Avadonia's assassination was Riliane's doing, largely due to their poor relations with one another.[20] Following the Green Hunting, Elphegort's citizens became vengeful towards Lucifenian soldiers and were openly spiteful of Riliane.[21]

The disdain towards the princess lasted centuries, characterized in history similarly to her actual portrayal at the time. Although the reality of the events were later written down by Yukina Freezis, history never brought to light what transpired and disregarded Yukina's writings as fictitious.[22] Riliane's flight from the palace was credited to Allen due to her disguise, and the servant was portrayed as a very disloyal person in spite of being the princess' closest ally.[23] However, the tragic tale described by Yukina became widely popular in the 10th century EC, although still unaccepted as a credible view of history.[24]

Retrieved from "https://theevilliouschronicles.fandom.com/wiki/Reign_of_Evil?oldid=124943"
Community content is available under CC-BY-SA unless otherwise noted.