"Here's a peasant. His enemy's the feudal lord, and he can turn into a monster."
―Rajih[src]

Rajih Assad was a peasant of Asmodean in the Beelzenian Empire and a childhood friend of Lukana Octo and Lilien Turner. After Lukana's disappearance, Rajih warned Lilien to be wary of Duke Sateriasis Venomania, jealous of their growing relationship. Discovering the Duke was beholden to dark powers and had enchanted Lilien, Rajih gave his information to Karchess Crim to help track down his missing friends.

"A peasant named Rajih, an acquaintance of Lilien's. Everyone says he's gone mad with his childhood friend gone."
―Marquis Ferdinand[src]

Rajih was born in Mystica, the son of a peasant farmer. Growing up, he met Lilien Turner and Lukana Octo, becoming their friend and playmate; as they grew older, the three began helping with their parent's work and began seeing each other less and less. Over time, Rajih also developed romantic feelings towards Lilien.[1]

"So what? Lord Venomania, one of Beelzenia's Five Dukes, will take a baker's daughter as his bride!? At best, you'll end up as his mistress."
―Rajih to Lilien[src]

After Lukana left to help her uncle in Lasaland at the end of EC 135, Rajih and Lilien learned she disappeared sometime after the New Year's Festival. In April, EC 136, he came by the Turner bakery and Lilien's father told him that Lilien was escorting Duke Sateriasis Venomania to the Misty Mountains, and Rajih went to meet with her there.[2] The next day, Rajih spotted Lilien with Duke Venomania in the market, hiding behind a wall as he watched their date from afar.

Bothered by Lilien's flirtatious behavior with the duke, he approached her later on and saw her wearing a frilly dress,[3] which he quickly learned had been bought for her by Venomania. Becoming angered, Rajih shouted at Lilien and tried to speak his feelings before giving up and instead warning her away from the duke, claiming he would only at best use her as a mistress. As the two argued, Lilien sent Rajih away after he brought up Lukana.

Following the fight, Rajih approached the Ferdinand Mansion where Lilien was having her next date with Venomania. Wishing to check on her, he scaled the property's wall and explored the mansion until he discovered the massacred corpses of Marquis Ferdinand and his household. Horrified, he ran through the halls in search of Lilien.

As he approached the mansion bedroom, Rajih stole a sword off a suit of armor and raced inside to find his friend in Sateriasis' arms. As he confronted the duke, he watched in horror as Venomania demonically transformed in preparation to kill him.[1] Drawing resolve from Lilien, Rajih tried repeatedly to fight Sateriasis, despite quickly accruing injuries, only to succumb to them and pass out on the spot. He later awoke and, seeing Lilien still standing placidly in the room, carried her home before passing out again in the bakery.

The next morning, Rajih awoke and, realizing what transpired, resolved to confess his feelings to Lilien. After limping to her room, however, he entered to find her already missing, having left to be with Duke Venomania.[4] Afterwards, Rajih tried sharing his story with the town and Lilien's parents, only to find no one remembered that the duke had visited town at all. With everyone believing he imagined the scenario, he began drinking all day to drown out his sorrows.

During the summer of EC 136, Rajih was approached in his drunken stupor by Count Karchess Crim, who, after introducing himself properly, questioned him about his experiences with Duke Venomania and Lilien. After Karchess stopped Rajih from leaving with his surprising strength, he convinced Rajih he wished to speak to him as equals and then showed him the Golden Key he possessed, a weapon capable of defeating a demon.[5] Convinced to help the Count, Rajih told him everything about Duke Venomania's visit to Mystica.

After Karchess successfully assassinated the Duke later that year, Rajih reunited with Lilien and Lukana and the three of them decided to start a new life, traveling the world and eventually settling in the East.[6]

"There...there are times when a man must act even if he knows there will be no reward!"
―Rajih's selfless nature[src]

Rajih was a loyal and steadfast individual, devoted to those he cared about. Having grown up with Lukana and Lilien, Rajih considered both of them to be his close friends, even as they began seeing each other less and less. In particular, the peasant developed romantic feelings for Lilien and became very protective of her safety, although hiding these feelings from her. As a result, he was jealous of Lilien's courtship with Duke Venomania, although willing to support her if she was really happy with him; after losing her to the duke, Rajih sank into a drunken depression before his resolve was rekindled.

He was also somewhat headstrong and could sometimes be difficult to deal with, also being unafraid to argue with his friends, especially when angered. At the same time, Rajih stood firm with his convictions, even when afraid or in dire circumstances, and believed in doing the right thing regardless of the reward. Rajih also showed a distaste for nobility and had a clear disinterest in the manners or respect the aristocracy expected from him. He also disliked noble society, particularly how they treated women; as a result, Rajih had a distinct skepticism about Sateriasis and was similarly suspicious of Count Karchess.

Rajih showed a degree of resourcefulness, able to adapt to his situation and remain resolute while taking advantage of his surroundings.[1] Despite this, he lacked any actual skills as a fighter.[4] Although partially motivated by jealousy, he was able to recognize the duke's deceiving nature, displaying a strong judgment of character.[1] Still, he was largely powerless against the nobility, being a peasant, a fact that had broken his spirit for a time.

Lilien Turner: Rajih's friend and the object of his crush. Rajih became friends with Lilien from childhood and eventually came to love her, seeing her as the most important person in his life. Rajih wished only the best for Lilien, investigating Venomania's true intentions and attempting to rescue her even if she did not return his feelings. Although demoralized when she left to join the Duke's harem, Rajih's convictions to save her were soon rekindled and he later joined her and Lukana in their travels to escape Abyss I.R.

Lukana Octo: A childhood friend of Rajih's. Rajih valued his friendship with Lukana deeply, although unable to see her as often once they grew up. He became very concerned when she vanished, helping Lilien to look for her, and after she was freed from Venomania's clutches he aided her in her travels to escape from Abyss I.R.

Sateriasis Venomania: A rival for Lilien's affection. Rajih disliked the duke for courting his childhood love and was suspicious of his intentions, believing that Venomania was only using Lilien. After discovering the truth about the duke, he was deeply shocked as well as horrified, believing him to be an evil man. Rajih became broken by his defeat at the duke's hands, although his drive to stop him was soon rekindled by Karchess.

Karchess Crim: Rajih's partner. Rajih was initially suspicious of Karchess and his motives, wondering why a man of such high status would speak to him and too disillusioned by being defeated by Venomania to take the count seriously. After being shown the Golden Key, however, Rajih recognized Karchess as his only means to free Lilien.

Rajih as in the The Lunacy of Duke Venomania manga

Rajih with his friends in the manga

Rajih as a child in the manga 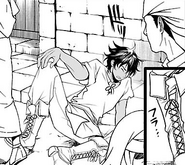 Rajih after becoming a drunk