"The power to see the future. Strictly speaking it’s not really my power, but rather that of the original owner of the body I gave to Kayo—Lukana. Only, it’s not something that I can actively use; it manifests in the form of the occasional dream. And in those instances, the dreams…are always purple."
―Ma[src] 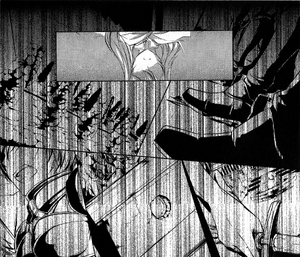 Prophetic Dream,[note 1] also known as the Purple Dream,[note 2] was a magic ability where the user sees visions of the past or future through dreaming. Seemingly exclusive to the Loop Octopus Clan and its descendants, the power was highly valued by mages.

A prophetic dream involved the possessor seeing into parallel worlds and thus receiving visions of the past or future through dreams.[1] The visions typically appeared to the dreamer as a collection of images with distinct color hues. Each color carried a different significance for the prophet, with purple signaling that once that particular vision occurred, it was impossible to change the rest of the visions in the dream. As a result, the possessor could use their knowledge of the other colored visions to inform others of the potential future or change the future before it came to pass.[2]

Despite their power of foresight, the prophetic dream ability was largely uncontrollable and its content was seemingly random in nature.[3] Likewise, the visions were often incomplete and given little to no context, making it possible to misinterpret the events being seen.[4] Because the ability was unique to members of the Loop Octopus Clan and its descendants, no one outside the clan could learn the magic ability.[5] However, if the body of a clan member were possessed by another individual, they would also be able to receive prophetic dreams.[2]

Retrieved from "https://theevilliouschronicles.fandom.com/wiki/Prophetic_Dream?oldid=192591"
Community content is available under CC-BY-SA unless otherwise noted.