Project 'Ma'[note 1] was a government science project developed and funded by the Magic Kingdom Levianta. Overseen by the Leviantan Senate, the project was set up to birth suitable reincarnated human bodies for the twin gods Levia and Behemo in order to prevent the country’s foretold annihilation.

After Queen Alice Merry-Go-Round prophesied the Magic Kingdom Levianta's destruction by Sin around BT 005, the Leviantan Senate heeded her prediction and set up the projected countermeasure: the rebirth of the twin gods, Levia and Behemo, as humans to cleanse it,[1] thereby eradicating HERs from the population.[2] The senate sanctioned the project and selected Adam Moonlit to direct it, opting to have the gods' human bodies artificially produced in the royal institute.[3]

The project determined that a woman with powerful magic would be needed to birth the twin gods after being injected with the seeds of god to induce the pregnancy.[4] In order to entice potential candidates,[3] the woman who successfully birthed the twin gods would be worshiped as the "Mother of the Gods" and regarded as the Ma,[5] seated as the ruler of the Magic Kingdom.[3]

Many flocked to the Institute, desiring to be the mother, but failed the surveys administered to determine their viability as Ma. Eventually, Eve Zvezda tested admirably and was selected as the Project’s candidate, receiving treatment.[3] Soon after being implanted with the Seed of God,[4] she conceived children and, after an inspection, they were determined to be twins and dubbed Cain and Abel.[3] At the time of their births, the twins were discovered dead and the project was deemed a failure.[6]

With Adam and Eve fleeing the country, Seth Twiright was selected as his replacement. Under Seth’s direction, the second project selected Meta Salmhofer from Apocalypse to be the next mother due to having a rare magical power. With the senate’s cooperation, Meta was captured and agreed to undergo treatment to escape execution.[6] Meta conceived and later safely birthed the twins, Hänsel and Gretel on December 27, EC 0. She fled with the children soon after and the project was deemed another failure.[7]

While Meta was being hunted, the third project went underway.[7] It was later suspended due to the test subject’s frail body and resulting death. Selecting another candidate as the mother, treatment began but the subject was killed by members of Apocalypse before any results. After the fifth subject was selected, she successfully conceived life but gave birth to a single child instead and was subsequently punished.

After successfully conceiving twins, the sixth candidate,[8] Marina Lucif,[9] was abducted by her husband, Wei. Her corpse was later discovered in the village of Nemu and the twin fetuses confirmed missing. With the seventh project established in EC 013, four potential candidates were submitted for evaluation: Milky Eights, Ly Li, Elluka Chirclatia, and Irina Clockworker.

After acquiring their survey data, all four were examined in preparation for the final selection. Following the sudden deaths of the other three candidates, Irina was selected as the new test subject. Around six months later, the Levianta Catastrophe occurred, obliterating the entire Magic Kingdom and permanently ending the seventh project prematurely.[10]

As a result of the disaster, the entirety of the Magic Kingdom was reduced to a wasteland, and the project was a failure. Both Seth Twiright and Irina Clockworker survived the destruction, albeit mortally injured.[10] The successful experiments, Hänsel and Gretel, later murdered their foster parents and disappeared, with no historical records even validating their existence.[11] In the centuries afterward, history indicated an explosion caused at the Levianta Royal Institute during an experiment was what caused Levianta's destruction.[12] 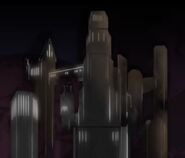 Retrieved from "https://theevilliouschronicles.fandom.com/wiki/Project_%27Ma%27?oldid=192072"
Community content is available under CC-BY-SA unless otherwise noted.