Pollo was the twin brother of Arte and a loyal servant of Banica Conchita. Meeting Banica as a child, the servant served her for over a decade. To prevent the Duke's death, Pollo and his sister kept the Glass of Conchita in their possession, giving Banica the opportunity to forge a contract with the Demon of Gluttony. He was one of Hänsel's reincarnations.

Pollo was born in EC 298 as the twin brother of Arte. In EC 306, the two came to the Conchita Mansion and were hired to serve the family by Ron Grapple.[1] Drawn to their new master, Arte and Pollo met the depressed Banica as she holed herself up in the mansion's basement. By the end of the season, they became close friends,[2] with both twins becoming obsessed with her.[1]

In June of EC 311, Pollo accompanied Arte, Ron, and Banica to Marlon to meet with her betrothed, Prince Carlos. After Banica finished dining with Empress Juno, her Beelzenian ministers, and the Marlon Royal Family in February of EC 312, the twins approached the dining table and began clearing the dishes with Ron. The party then saw Banica suddenly steal and devour the leftovers like an animal and the twins quietly giggled as they watched her eat. Afterward, the furious King Charon broke off the engagement and the Conchita staff returned home with their mistress.[3]

In January of EC 316, Pollo and his sister joined Banica for her travels abroad, journeying through Elphegort, Asmodean, Levianta, Marlon, and Lioness over the next two years. As the noble researched new cuisine, Pollo studied how to cook the exotic meals. After the three returned to Beelzenia in EC 318, they took a carriage to Gasto before the horses suddenly collapsed. The three then traveled to the Conchita Mansion on foot, reaching it late into the evening. Tempering Arte's rude greeting to Ron, he followed her into the dining hall as she demanded Ron make them food.

Later on, Arte and Pollo carried the foreign ingredients Banica discovered to her meeting with Empress Juno in the imperial palace throne room, standing behind the noble as she related her travels. At Banica's call, Pollo brought forward the jarred Ziz tiama for the empress to see before handing it to Arte to cook. When his mistress later hoped to show Juno the trauben saplings she brought, Pollo brought the potted plant forward as the noble convinced the royal to support her endeavors to revitalize the Empire's food culture.

After Duke Muzuri died in August, EC 321, and Banica was appointed as his successor two months later, Arte continued serving her new lord, travelling with her to the various foreign nations in Evillious and Akuna. At some point, they came into possession of the red wine glass and became aware of the demon inhabiting it, storing the vessel of sin in a hole at the back of their room's fireplace per Banica's will.[1]

In July of EC 323, Arte and Pollo planned to accompany their master on a journey. They returned soon after and spotted Ron cleaning their room and about to trash the wine glass he found. Stopping him before he could leave, Arte and Pollo ominously insisted that they needed the glass and that Banica would decided with it whether she wanted death or a contract. The twins shortly after murdered Ron,[1] cursing him to never die using their powers as irregulars.[4] When the Demon of Gluttony attempted to goad Banica into a contract several days later, one of the twins brought the glass filled with baemu blood for their lord to taste.[1]

After Banica made her contract with the Demon of Gluttony, Pollo continued serving his master's needs and accompanied her to the banquet Duke Oruhari held in November, carrying out the insects, spiders, and "dessert" of worms Banica desired to eat at the party.[5] In November of the following year, Pollo was given the responsibility of managing the noble's territories in Conchita's place, along with Arte.[6]

As Banica went through a number of cooks in EC 325, the twins gladly murdered each of them after Banica became annoyed with their disgust of her appetite, up to the fourteenth chef, Ildebrando. While preparing Banica's next meal, the twins spotted the thief Platonic in the mansion's basement after she was caught by their undead pig, Murara.

Pollo chose this time to debut his new "villain" laugh, resulting in an argument with Arte; Platonic then threw a smoke bomb to evade them and the two searched for her, to no avail.[7] When Josef was hired as a chef in EC 325, Pollo disliked him due to his appearance, and often harassed him with his sister. After Josef spent the night with Banica, Arte and Pollo made breakfast with him the next morning.

Later that year, the Beelzenian imperial family sent a messenger with a military escort of twenty soldiers to the estate, in response to Banica repeatedly ignoring their summons. Irritated by the messenger's persistence, Pollo murdered him, laughing over his dead body. As a result, his master and Arte unleashed an undead horde on the remaining military escort. Afterward, Josef fled the estate and the twins tracked him to the neighboring town, dragging him back to Banica.

After Josef's failed murder-suicide attempt on Banica, they followed her orders to cook him and served him as another one of her meals.[8] Around August of that year, Pollo spotted Arte's bloodied ribbon and, knowing she'd never part with it, wondered what happened. He was then approached by Banica who, having just eaten Arte, devoured him as well.[9]

The following month, Elluka Clockworker found that the mansion was empty and its owner and staff missing. Finding everything in perfect order, the Empire concluded Arte and the rest of the staff fled with Banica to a neighboring country.[6] While reviewing her films at Evil's Theater, Ma claimed Elluka faced great difficulty in acquiring the Glass of Conchita due to Banica's servants, speculating that Pollo's loyalty to Conchita was due to her resemblance to Meta Salmhofer.[10]

Pollo's succeeding reincarnation, Lemy Abelard, became a loyal assassin for his adoptive mother Julia, given the Glass of Conchita for his birthday.[11] After Lemy's death, his soul merged with the glass and reawakened Hänsel's memories as Pollo, continuing his service to Banica as the Demon of Gluttony's servant.[12] He later awakened from the glass as the male servant.[13]

"You’ve eaten Arte? But that’s terrible! Without her there’s no one here who can cook! Ohh, we’re in trouble."
―Pollo's disconnect from reality[src]

Pollo was dimwitted and clumsy, acting far more innocent than his twin and often having a blank expression, although sometimes lapsing into a more manic smile like his sister; he also had a peculiar laugh, giggling "gihihi" when amused.[14] Although rude and foul-mouthed like his sister, Pollo occasionally off-set her cruelty with more innocent suggestions and was less foul-tempered.

Despite this, as a HER, Pollo was compelled to commit malicious deeds and took pleasure in them. Similarly, he showed a disconnect with reality at times and seemed to not grasp the full impact of events, such as being more worried about who was going to cook dinner after learning Arte had been eaten.[9] He also liked playing with the undead soldiers.[2]

Unlike his sister, Pollo was unintelligent and was not as skilled as some of the other servants with their duties. When cooking meals for Banica, Pollo emphasized quantity over quality.[14] Both his twin and he shared an uncommon youth, maintaining a child-like appearance during the entirety of his tenure as Banica's servant, despite being well into his twenties at the time of his death.[2] In spite of his small stature, the servant was capable of restraining and killing men nearly twice his size.[1] He was also capable of handling and slaughtering the undead livestock despite their ferocity.[8]

Banica Conchita: Pollo’s master. Pollo had a close friendship with Banica stemming from childhood; due to this and Banica's resemblance to Meta, Pollo was fanatically loyal to her and demanded others to respect the duke. The servant would strive to achieve Banica’s aims and follow her decisions no matter what they were. This included both acting on what he perceived Banica would want and obeying her every direct order.

Arte: Pollo’s twin sister. Pollo was very close to Arte and always stayed by her side, eerily in sync with her words and actions. The two shared in equal measure their duties as Conchita’s servants, even up to, later, overseeing the governing of her territories.

Josef: A fellow employee of Conchita. Pollo saw the chef as reminiscent of Adam Moonlit and disliked him, constantly harassing him with Arte in their day-to-day interactions. After "Josef" attempted to betray Conchita, Pollo was eager to follow instructions to cook him.

Ron Grapple: A fellow servant of Conchita. Pollo, like his sister, disliked Ron’s presence in their room and greatly disapproved of the chamberlain’s interference in Banica’s negotiation with the Demon of Gluttony. Seeing him as a threat to his master, Pollo aided in Ron’s death without remorse.

Hänsel: Pollo's first incarnation. Pollo received his loyalty to Conchita from Hänsel's relationship with Meta Salmhofer, seeing remnants of Meta in Banica. As well as this, he had some recollection of Adam Moonlit, seeing remnants of Hänsel’s foster father in Josef.

Lemy Abelard: Pollo's later incarnation. Pollo's appearance and soul passed on to Lemy Abelard, and with it he passed on his loyalty to anyone resembling Meta, such as Julia.

Detail of the clothing below their uniform

Profiles of Pollo, Arte, and Banica from Deadly Sins of Evil: Evil Food Eater Conchita
Add a photo to this gallery 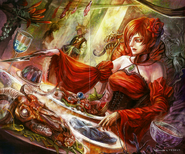 Pollo in the background as seen in the light novel

Pollo in Waltz of Evil: The Deadly Sins of Evil Guidebook
Add a photo to this gallery 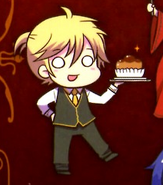 Arte and Pollo as they appear in the manga 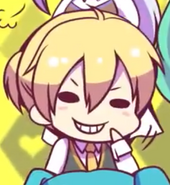 Pollo as he appears in the Deadly Sins of Evil manga

Pollo as seen in the manga

Pollo and Arte as they appear in Quartets of Evil 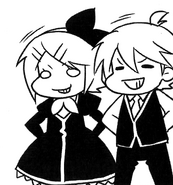 Pollo in the novel's benefits booklet

Pollo in the Waltz of Evil: The Deadly Sins of Evil Guidebook advertisement
Add a photo to this gallery

Retrieved from "https://theevilliouschronicles.fandom.com/wiki/Pollo?oldid=190666"
Community content is available under CC-BY-SA unless otherwise noted.