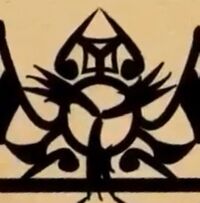 Père Noël[note 1] was a criminal organization formed by Julia Abelard in the Lucifenian Republic sometime during the turn of 7th century EC. The group was responsible for numerous illegal activities, from black marketing to assassination. Its reach had stretched far across the Evillious region and maintained influence among many nations' businesses and governments.

Sometime during the EC 590s, Julia Abelard founded Père Noël and recruited her first disciple Mayrana Blossom, who chose the codename "Fourth Shadow". Giving herself the codename First Santa Claus, Julia led the organization while Mayrana acted as her double.[1] During the late EC 590s, Santa Claus and Shadow recruited the fortune teller Yuzette Ora in Rollam as "Seventh Magician", tasking her with using the Venom Sword given to her to perform face surgeries for profit.[2]

In EC 597, Fourth Shadow was tasked with burning the town of Lioness and framing Elluka Clockworker for the event; disguised as the fabled Mage of Eternity, Shadow completed the mission.[1] Sometime that same year, the fugitive Kaidor Blankenheim contacted Santa and arranged to have Seventh Magician change his face to that of the secretly murdered Bruno Marlon, assuming the man's identity.

Later on, Santa assigned Shadow on a mission to operate from Calgaround in Elphegort. Shortly after the assignment, Mayrana had Seventh Magician perform her "miracles" and change the shadow leader's face to resemble Julia's;[2] some time after, she succeeded in being elected mayor of Calgaround.[3] During an assassination mission at Milanais Theater in EC 606, Fifth Pierrot was interrupted by a child suddenly being mauled by a lion backstage and was forced to flee, evading pursuit.[4]

In EC 607, Fifth Pierrot was shot and killed by Justea investigator Willus Zorach;[5] First Santa Claus immediately assigned Sixth Venom as his temporary replacement. During the latter half of EC 608, Fourth Shadow recruited the destitute Marquis Kaspar Blankenheim as "Second Dealer" to operate Père Noël's black market from his mansion in Toragay on Santa's orders.[1] Under Second Dealer's management, the underground market thrived with profits from illegal goods.[6]

Some time after, "Bruno Marlon" agreed to be a mole in the Freezis Foundation for Père Noël so long as Kaspar's life was secured.[2] Later on, First Santa Claus had potential loose ends eliminated for the upcoming Lucifenian presidential elections. In December of EC 608, Sixth Venom was tasked with eliminating Seventh Magician and retrieving the Venom Sword. After alerting Magician to the plot beforehand, she escaped with the Venom Sword and Sixth Venom began tracking her.[2]

In EC 609, Second Dealer's wife, Margarita Blankenheim was recruited as "Third Sleep Princess".[1] Later that year, the organization enacted an operation to develop an airborne epidemic from Gift and then monopolize a cure for major profits. While Shadow worked on developing the proper poison, Sleep Princess worked on developing a cure via sap from the new Millennium Tree.[7] At some point, Dealer began selling Margarita's incomplete variant of the poison and monopolizing the market for himself, claiming to be First Santa Claus.[1]

On August 15, Shadow was tasked with attacking Deputy Mayor Banner in Aceid and completed the mission, leaving credit to "First Santa Claus".[3] Following First Santa Claus' inauguration as the President of Lucifenia on August 18, Sixth Venom joined Fourth Shadow in Calgaround the next day to support her plan to eliminate Elluka Clockworker; shortly after, Venom purchased the original copy of the Freezis Fairy Tale "Flower of the Plateau" from Dealer. On August 25, Shadow confronted Dealer for his apparent betrayal of the organization at his mansion in Toragay before passing on the creation of the Gift plague to Sleep Princess.[8]

On August 30, Fourth Shadow directed Hanne Lorre to Calgaround's royal library for more information on the Flower of the Plateau. Sixth Venom then handed off the Flower of the Plateau tale and directed her to Second Dealer in Toragay.[3] Later that night, Third Sleep Princess tested her experimental Fifth Gift on her philandering husband and killed him. Afterwards First Santa Claus had Kaidor halt the World Police investigation into Kaspar's death.

Around the same time, Shadow moved the underground market to her mansion in Calgaround.[1] During the assassination of Ton Corpa in his mansion in Rolled on October 6, Sixth Venom discovered Ton already killed and the diva he managed, Rin Chan, abducted; after confirming her adopted son Lemy had perpetrated the crimes, First Santa Claus had a letter claiming Fifth Pierrot's responsibility for the incident sent to the Saintes Fauraux Newspaper that morning.

That night, Santa officially recruited Lemy as the new Fifth Pierrot, tasked with taking up Sixth Venom's mission to locate and kill the fugitive Seventh Magician.[1] Narrowing her down to being disguised as a prostitute in Rolled, Pierrot began assassinating prostitutes during the night in search of Magician. As investigations into Sleep Princess' murders continued, Santa contacted Bruno again and promised to make him the next Second Dealer if he disposed of the meddling Hanne and Heidemarie Lorre.[9]

Once she finished her airborne version of Gift, Sleep Princess released the poison in Toragay, enacting a massacre of its inhabitants starting on October 17. With Toragay plunged into panic, Kaidor was left to contain the epidemic while arresting Hanne and Heide.[9] On October 21, Sleep Princess linked up with Shadow at her mansion in Calgaround and continued working on a new Gift. Soon after, Shadow was confronted by Elluka Clockworker and Gumillia and the two battled, resulting in Shadow's defeat and subsequent demise.

After completing her Seventh Gift, Sleep Princess drank her concoction to commit suicide shortly after being confronted by the two mages. Sixth Venom then made an assassination attempt on Elluka while they were escaping with Rin Chan before fleeing to retrieve the Clockworker's Doll.[1] Failing to recover the doll, Venom worked to finish cleaning up the aftermath of the botched operation.[10]

In November, Kaidor was recruited as Second Dealer following "Bruno's" promotion to vice president of the Freezis Foundation and he took over management of the underground market.[11] After finishing his duties in Elphegort, Venom reported the results of his botched operation to First Santa Claus on November 26 and was assigned weeding the President's garden that morning as punishment for the affair.[10]

Late at night on January 3, Dealer met with Santa regarding his recruitment and confirmed Justea investigators' arrival to investigate the prostitute killings for Pierrot before leaving early that next morning. On February 11 of EC 610,[12] Fifth Pierrot tracked Seventh Magician to a brothel on 7th Block and assassinated the fugitive organization member. Two days later, First Santa Claus recruited Elluka Clockworker and Gumillia as "Seventh Magician" and "Eighth Sniper", believing Elluka to be Sleep Princess.[5]

Sometime after, Second Dealer and First Santa Claus began plotting the elimination of fellow Freezis Foundation Vice President Nob Nicole before he executed his joint plan to hunt and put down Père Noël with the World Police.[5] Throughout May of EC 610, Dealer began sending manpower to the New World Maistia in anticipation of taking over Nob's duties; at some point, he pressured the International Works Department to recall its Justea investigators in Rolled.

On May 16, Dealer met with Santa and Pierrot to confirm Nob's planned assassination after the foundation's meeting with the Lucifenian government the following week. On May 23 around 5:34 PM, Fifth Pierrot's assassination of Nob at the Lucifenian Palace was interrupted when Justea investigators raided the palace and arrested Kaidor Blankenheim on suspicion of being Bruno Marlon. Afterwards, President Julia Abelard began facing scrutiny and investigation from the World Police and public officials for her alleged connection to Kaidor and Père Noël.

Dealer was later transferred to Castle Hedgehog and tortured by the Interrogation Execution Department. On September 2, Seventh Magician met with Fifth Pierrot at an inn on 12th Block with an offer to join her and Eighth Sniper in escaping before their connection to Père Noël was realized. Pierrot reported the meeting to Santa the next morning; he and Sixth Venom were then tasked with assassinating the traitors; foreseeing their assault, Magician fled with Sniper before Pierrot and Venom raided her brothel.[13]

Later that month, Sixth Venom was tasked with assassinating Second Dealer before he confessed confidential details concerning Père Noël and completed the assignment. Fifth Pierrot then began assassinating key persons criticizing or investigating President Julia, starting with murdering Elman Ogbang in 11th Block on October 2. During the assassination of Justea Investigator Ayn Anchor in 1st Block on December 26, Fifth Pierrot was interrupted by a fatal shot by Eighth Sniper and later buried.[4]

On January 26, President Julia announced her resignation and sent a challenge to Elluka before fleeing with Sixth Venom to Merrigod Plateau, hiding out in Pale Noël's tomb. On January 29, Fifth Pierrot revived early that morning and began heading to link up with Santa. Around 3:00 PM, Venom ambushed Elluka and Gumillia en route to Calgaround before being defeated and restrained.[14]

On January 30 around 2:00 AM, Elluka and Gumillia confronted Santa at Pale's tomb and cornered her when Pierrot arrived.[15] The two remaining members then battled the traitors for two hours before Gumillia shot and killed Pierrot and Santa Claus activated Black Box Type S in a last ditch effort to kill them, resulting in Julia's defeat.[16] Later that day, the World Police arrested Sixth Venom and Germaine Avadonia, believing the latter to be Julia, and Père Noël was formally dismantled.[17]

Following its dissolution, the infamous organization remained well remembered in history for its actions, with both Julia and "Lemy the Ripper" becoming particularly legendary in the succeeding centuries.[18] Bruno Zero would later found a faction with the same name as Père Noël, assigning its members numbered codenames. Following its reorganization as the Dark Star Bureau's espionage force PN, Gallerian Marlon used a codename similar to Julia's while acting as its master.[19]

Functioning as a criminal organization, Père Noël was headed by a core team of seven codenamed leaders known as the Sept.[note 2] The Sept operated under codenames and had specific roles. New roles could be added to the Sept, as with the case of Gumillia being Eighth Sniper.[5] Under Kaspar and later Kaidor, there were numerous other dealers that comprised the Père Noël's black market.[1]

Retrieved from "https://theevilliouschronicles.fandom.com/wiki/P%C3%A8re_No%C3%ABl?oldid=191320"
Community content is available under CC-BY-SA unless otherwise noted.