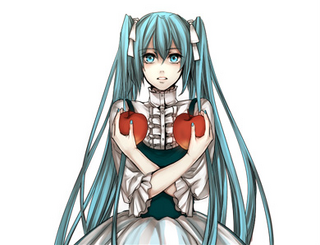 The Original Sin Story[note 1] is a multi-media series conceptualized and developed by Akuno-P. It belongs to mothy's larger Evillious Chronicles. Originally told in song, the series has since been referenced in numerous works by mothy, revolving around the prophesied destruction of the Magic Kingdom Levianta and the crime committed by one woman in the forest.

The series is set in Bolganio, a fictional continent in the series' world, with most of its major actions taking place in its western region, Evillious. The main storyline occurs around the northern area of the region. Originally, the series begins in the "BT" era, but after the birth of Hänsel and Gretel, the Evillious Calendar is established and "EC" is used for events up through EC 015.[1] Because of the prophecy made by Queen Alice Merry-Go-Round, Magic Kingdom Levianta politics play a large role in the events taking place.[2]

A large and powerful nation in the northern area of the Evillious region. Becoming one of the most magically and technologically advanced nation of its time, Magic Kingdom Levianta rivaled the Tasan Empire.[3] Its people worship the twin dragon gods, Levia-Behemo.[4] At the time, the country is being terrorized by the criminal organization Apocalypse.[5]

A peaceful nation south of Levianta. Originally known as Heldogort, the country split off its religious ties to the Magic Kingdom in favor of worshiping the dragon god Held, the Magic Kingdom branded its followers as a heretic cult and suffered repression from its neighbor.[6] It is said that the forest in the southern area of the country is inhabited by Held, believed to have incarnated as a tree.[7]

The Original Sin[note 2] was the entity allegedly born in Eve Moonlit after stealing the infants Hänsel and Gretel and subsequently killing their mother, Meta Salmhofer.[8] After Eve's death, her foster children were alleged to have split the Original Sin in her remains into seven fragments, using them to create the vessels of sin before scattering them across the world.[9]

An artificial human created via scientific experimentation. They were created by Seth Twiright for the purpose of increasing the number of HERs in the world. They tend to suffer a harsh social stigma for their existence and live difficult lives.[4] The process of creating a ghoul children was presumably lost following the Levianta Catastrophe.

Sin[note 3] was a forbidden ark in Magic Kingdom Levianta[4] containing the twin gods Levia-Behemo. It was originally a ship known as the "Climb One", brought to the Third Period from the previous world.[10] Maria Moonlit prophesied that it would bring destruction to the Magic Kingdom, leading to the creation of Project 'Ma'.[11] A machine inside the Sin was later used by Kiril to revive Elluka Chirclatia, causing it to create a huge explosion; it was ultimately buried due to the resulting catastrophe.[4]

A Seed of God[note 4] was an element of the birthing process for Project 'Ma'. It is assumed to be the fertilizer for the selected candidate's egg to conceive the twin gods. It was injected into the recipient mother to conceive the twins.[12] During Seth Twiright's tenure with the project, the seed was secretly replaced with a Seed of Malice.[note 5][13]

Venom[note 6] was a drug developed by Seth Twiright. Derived from the blood of Eve Zvezda, who was a Levia inheritor, it had the power to brainwash those who ingested it. Eve herself was immune to its effects.[14] Creating Venom also produced sleep-inducing gas as a byproduct.[15]

When the series was first conceptualized, it was told in reverse order, with mothy releasing Tale of Abandonment on a Moonlit Night first,[16] followed by Moonlit Bear.[17] He later uploaded the Clockwork Lullaby song Chrono Story to bridge the Original Sin Story to his Seven Deadly Sins Series. Since the release of Original Sin Story -Act 1-, the songs' story has been retold in a more linear manner while being divided into several "acts". Although not reaching the same popularity as some of his other series, the series has become an important backstory for mothy's Evillious series. Akuno-P has released a "complete edition" compiling all the previous and new songs in the series.

The Original Sin Story initially received short, literary portrayals of its first two songs in Waltz of Evil: The Deadly Sins of Evil Guidebook, often paraphrasing the original lyrics of the song for each illustrative story.

After the Deadly Sins of Evil series finished, mothy said that would publish more content for the OSS series.[18] In October 2018 he published a poll asking what kind of content they would prefer, the option his fans voted most being a novel for the OSS series.[19] mothy then expressed his doubts whether a single novel would be enough for the series, due to its many characters.[20]. Finally, Original Sin Story: Crime was published as the first novel of the series, released on the Winter Comiket, on December 31, 2019. In January 2020 mothy announced its sequel, Original Sin Story: Punishment, to be released by the end of 2020.[21].

Note: this list only contains some of the major recurring characters in the series. For a list of all minor characters that appear or are mentioned in passing, see the List of Minor Characters in the Original Sin Story.