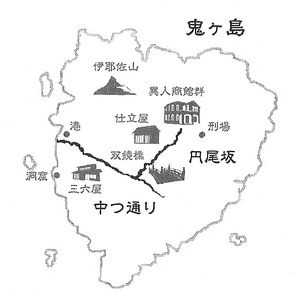 Onigashima[note 1] was an island off the southern coast of Jakoku located on the west side of the Izami region. It acted as a major trading hub with the western world during Jakoku's largely isolationist era.

At some point, the island became a part of Jakoku, having a single harbor with the town of Enbizaka being founded in its center. Following the end of the civil war in EC 549, Gaou Octo was promoted to magistrate of the region, later sealing the Twin Blades of Levianta in a cave in Mount Inasa. Starting in EC 580, any foreigners captured by Gaou and his successors were deported to Onigashima, becoming a center for limited trade with foreign nations.[1]

In EC 838, a fire ravaged Enbizaka, wiping out a large part of Onigashima's population and architecture; the town was rebuilt over the next four years. In EC 842, the island's population was thrown into a panic following the Enbizaka Murderer Scandal perpetrated by Kayo Sudou. Ten years later, a Maistian fleet led by Perrié Cutie Marlon forced Onigashima and the rest of Jakoku to end its isolationism and conduct full free trade with foreigners.[1]

A city in the middle of the island, located along the hill slopes. It became a hub for trade during the EC 800s, and contained numerous shops and firm branches. It was the site of the Enbizaka Murderer Scandal.

Mount Inasa[note 2] was a volcano located north of Enbizaka. It had at least one cave.

An empty temple located on the Inasa mountainside. Originally used by Buddhist monks, it was later abandoned by the EC 800s. The Crimson Robed Masses later approached the area in EC 838 and used the temple as a hideout well into the EC 840s.

A port for ships. It mainly accepted merchant ships from foreign countries.

Retrieved from "https://theevilliouschronicles.fandom.com/wiki/Onigashima?oldid=192416"
Community content is available under CC-BY-SA unless otherwise noted.