Nyoze Octo, later known as Shakuson, was a USE second lieutenant of Levianta and a member of the Tasan Party. Falsely convicted for murder by Gallerian Marlon, Nyoze escaped from his imprisonment and began living under an assumed name. While investigating a series of assassinations in Rolled, he fell in love with their perpetrator, Nemesis Sudou.

Nyoze was born the brother of Gammon and a member of the Octo Family in the Union State of Evillious sometime during the EC 900s, living in Levianta's Samadin region. After his father passed away Nyoze became the family head, inheriting his family's heirloom, the Venom Sword, and becoming taken by its demon's enchantment. As part of this he learned of how his grandfather Anan Octo had found the sword after years of searching but that he had died in Levianta.

He was also told that the sword had an enchantment that the Octos were immune to thanks to a seal inherited from their ancestor, not knowing the seal was ineffective. Later on, Nyoze joined the USE's Leviantan military and achieved the rank of second lieutenant, becoming stationed at an army garrison.[1] In EC 978, his commander Tony Ausdin had him and his brother assigned to tend to the playwright Ma while she lived in the army quarters, Ma told to ask Nyoze or Gammon for anything she needed.[2]

"The fugitive Nyoze Octo has been spotted. We’ve estimated that he is currently staying with his girlfriend in the town of Rolled in Lucifenia."
―Bruno to Gallerian[src]

Around EC 978, Nyoze was visited by Dark Star Court Director Gallerian Marlon and Ma in his home. Seeing the judge attempt to pick up the Venom Sword, Nyoze stopped him, explaining the enchantment and then the seal that allegedly protected only members of the Octo family. Asked how he got the sword, Nyoze explained the history of how Anan's descendants were guarding it in Levianta. As Gallerian began proposing that they move the sword somewhere else where it would be safer, Nyoze refused, reasoning that the sword was a family heirloom.

As Ma and Gallerian persisted in trying to persuade him to hand it over, Nyoze eventually made the two leave the house. Later on, Nyoze was framed and tried for the murder of the prostitute Medea Col by Gallerian, sentenced to 15 years imprisonment.[1] Sometime after, Nyoze escaped incarceration; taking the name of one of his brother's subordinates in the Tasan Party, he changed his name to "Shakuson" and moved to Rolled, Lucifenia, working as part of the police force there.[3] To disguise himself, he changed his features.[4]

In the spring of EC 982, Nyoze approached an Elphe woman under the shade of a sakura tree while on duty. As he talked about the Jakokuese tree and its blossoms with her, he learned the girl was also Jakokuese on her mother's side, and he further discovered that she was living in the apartment below his. Introducing himself to her by his fake name, Nyoze learned she went by the name "Themis Eight." The two talked a little further, with Nyoze complimenting her on her beauty, and he returned to work.

From then on, Nyoze and Themis began spending time together, frequently enjoying each other's company. During this period, Nyoze began investigating a string of murders occurring in Rolled, the victims all being prominent figures.[3] In summer of that year, Nyoze arranged to go to the local fireworks festival with Themis; while he waited for her in his apartment, he listened to the radio report on Gallerian giving a disproportionately reduced sentence to the murderer Heleus Gone, turning off the radio and musing on the implications of the report.

Themis soon met with him and the two headed to the festival,[5] being the only two people dressed in kimonos. The two chatted as they watched the fireworks; as they talked about the display, Nyoze turned the conversation to the approaching war in Evillious and the murders he was investigating, explaining when asked how the police had found few leads. Noticing Themis shaking, Nyoze assumed she'd gotten cold and the two went back inside.[3] During his courtship with her Nyoze discovered that Themis, really the PN assassin "Nemesis Sudou", was the one responsible for the murders,[4] asking Gammon to do a background check on her.

By Autumn, under the sakura tree Nyoze confessed to Themis his feelings for her and the two officially started dating. Nyoze also received a letter back from Gammon keeping him updated with current events. Having learned Nemesis was the illegitimate daughter of Gallerian Marlon, Gammon also suggested he continue observing Nemesis, as she may be key to taking the judge down. Already well in love with Nemesis, Nyoze wrote back to his brother that he refused to use her, and that he was not to hurt Nemesis even if she ended up assassinating him for her employers. In the meantime, he continued to investigate her murders.[3]

In December of EC 982, Nyoze walked with "Themis" and the two discussed their holiday plans, agreeing to celebrate Christmas together; planning to marry the woman he loved, Nyoze bought a diamond ring for her Christmas present. That Christmas, before work, Nyoze met with Themis under the sakura tree where they first met and gave her her Christmas present. Themis then held Nyoze at gunpoint, and he realized that she'd discovered his true identity; he then stood calmly as she accused him of just using her and of also being evil.

When Themis, conflicted, then asked if they could run away together, Nyoze refused; as he cited the respective reasons they couldn't, he unwittingly revealed to her the truth she hadn't even known herself, that Gallerian was her father. He comforted her when this subsequently sent her into hysterics, only for Themis to hold him back up at gunpoint again afterwards. As Nyoze smiled at her, she cried and apologized as she prepared to pull the trigger; after Nyoze said his last words to her, Themis fired her gun and killed him.[3]

Immediately after his death, Nemesis made a failed suicide attempt to keep the promise they made that they'd always stay together.[6] Following this, Gammon Octo had her abducted and, respecting Nyoze's wish not to harm her, instead recruited her into the Tasan Party.[4] Working with the party, Nemesis ended up confronting her employer Gallerian Marlon during the Leviantan Civil War to pay for his part in her lover's death.[7]

After Nemesis had destroyed the world with Punishment, her soul Levia Barisol constructed an illusory world and witnessed Nemesis' memories with an illusory Black Box, including her romance with Nyoze.[8] A fake final memory depicted Nemesis living a happier life with Nyoze, one in which she would be able to accept his marriage proposal.[9]

Nyoze was a good-hearted and strong individual. As head of the Octo family, Nyoze had taken seriously his role in not only protecting the Venom Sword from others, but protecting others from the sword.[1] Victimized by Gallerian Marlon's corrupt court, he similarly held a strong desire to see justice done, fitting with his later position as a policeman.[3] In contrast to the extremist views held by his brother, however, he did not see the ends as always justifying the means when it came to achieving justice.[4] This was fitting to his treatment of Nemesis, not wanting to hurt her or use her for circumstances outside of her control, as well as not blaming her for assassinating him.

Aside from his kindness, Nyoze behaved like an eccentric when acting casually with friends, while being more straight-laced and serious during work.[3] Intelligent and dedicated, he kept himself abreast of current events and considered the politics in the USE with appropriate gravity.[5] He also appeared proud of his Jakokuese heritage and embraced it, despite having been born and raised in Evillious;[3] he similarly did not appreciate any suggestions that the history of his family was inaccurate at the expense of his ancestor.[1]

Nyoze was a skilled military man, having entered into the USE army and achieved the rank of second lieutenant; in addition to this, he had skill in swordplay and other modes of combat.[10] As part of his skills as a preserver of the peace, Nyoze also had some competence as an investigator, discovering the truth about Nemesis despite any of her attempts to hide it from him. He conversely was skilled enough to keep himself from getting caught in his new identity for some time.[3]

Nemesis Sudou: Nyoze's lover. Meeting and falling deeply in love with her as "Themis Eight", Nyoze enjoyed spending time with Nemesis eventually came to want to marry her. As a result of this love, he didn't blame her for being a PN assassin and only wished to save her from her awful circumstances, comforting her to the last even as she prepared to kill him. As part of this, he had allowed her to shoot him so she wouldn't anger her employers.

Gammon Octo: Nyoze's younger brother. Nyoze shared a close familial relationship with Gammon, continuing to stay in contact with him after becoming a fugitive and the latter trusting him completely.

Anan Octo: Nyoze's ancestor. As the head of the Octo family, Nyoze was responsible for watching the sword that Anan claimed to be the Octo family heirloom, taking this job seriously.

Nyoze's profile in Deadly Sins of Evil: The Muzzle of Nemesis
Add a photo to this gallery 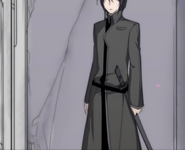 Nyoze as seen in The Last Revolver

Nyoze in The Muzzle of Nemesis

Nyoze in Deadly Sins of Evil: The Muzzle of Nemesis

Retrieved from "https://theevilliouschronicles.fandom.com/wiki/Nyoze_Octo?oldid=191604"
Community content is available under CC-BY-SA unless otherwise noted.