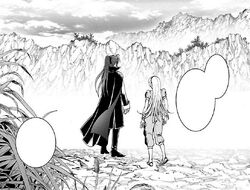 The Misty Mountains[note 1] was the mountain range in the southern region of Asmodean, located adjacent to the Babul Desert. Typically shrouded in fog for much of the year after April, they were known for containing ruins from the Magic Kingdom Levianta's era.

During the time of the Magic Kingdom Levianta, the mountains were filled with villas for the Leviantan nobles. After the Levianta Catastrophe, the area became deserted ruins over time.[1] At some point, the Clockworker Spoon had been hidden in the tomb under the ruins' altar.[2] During the following century, the mountain range became part of the Beelzenian Empire's territory along with the rest of Asmodean and became a historic site for the nearby settlement, Mystica.[1]

In EC 126, Elluka Clockworker visited the old ruins and prayed at its altar, sacrificing a ziz tiama octopus to conjure a rainstorm upon nearby Mystica lasting for three days. Although the drought plaguing the town had ended, the mountains were shrouded in a thick fog for most of the year and they began being called the "Misty Mountains".[3]

In EC 136, I.R. and Duke Sateriasis Venomania were led to the mountain range by Lilien Turner and proceeded to enter the old ruins in search for her father's magic tool. After the sorceress led Venomania to the altar, he unlocked the hidden passage and entered the underground crypt. After confirming the spoon present there wasn't a vessel of sin, they left.[2]

In EC 477, the Golden Dragon Unit passed through the mountains to aid the Asmodean army in the Babul Desert against the Kingdom of Lucifenia. Due to a defection from one of the other units, the group camped within the ruins while awaiting further orders. Gast Venom defected two weeks after when General Shalgham ordered for the "cursed" altar to be destroyed.

After Shalgham was murdered by his step-daughter, Gast was confronted by Abyss I.R. and rendered unconscious, losing the Venom Sword to the sorceress as a result. The next day, Gast was found and taken back to the capital. After his exile, Gast visited the mountaintop ruins several times in an attempt to contact his dead sibling but eventually gave up when she failed to appear.[1]

In EC 999, the Misty Mountains were completely decimated by Punishment. Following the end of the Third Period, the destruction site merged with the Hellish Yard along with the rest of the ground world.[4]

Leviantan ruins atop the mountain range. Although originally housing nobles from the Magic Kingdom's era, they became deserted ruins after its destruction. At the center of the ruins was an altar. They were used as a camping site by the Golden Dragon Unit during its war with Lucifenia.[1]

An old crypt from the Magic Kingdom's era located at the center of the mountains' ruins, beneath the rock. The Clockworker Spoon was laid within its coffin along with numerous jewels and gold coins. The entrance to the tomb was hidden underneath the ruins' altar.[2]

Retrieved from "https://theevilliouschronicles.fandom.com/wiki/Misty_Mountains?oldid=188881"
Community content is available under CC-BY-SA unless otherwise noted.