Edit
watch 01:36
We're Getting Mutants in the MCU - The Loop
Do you like this video?
Play Sound

Magic Kingdom Levianta
Milky Eights was a prostitute of the Magic Kingdom Levianta and the former lover of Pale Noël. Living her life as a harlot, Milky became Pale's mistress for a time before being selected as a potential candidate for Project 'Ma'. As a result, she became part of a dangerous survival game with the other candidates for the chance at being the next Ma.

Living in the Magic Kingdom Levianta, in her youth Milky became one of the lovers of Apocalypse leader Pale Noël, regularly visiting him at their base in Calgaround.[1] With her relationship with Pale being publicly known, Milky later became a prostitute in Welvya,[2] allegedly giving birth to Pale's child in EC 011.[3]

In EC 013, Milky was surveyed for her viability for Project 'Ma'. Despite her failure to satisfy the Project's mandate of having to be a virgin, she was accepted as a potential candidate.[4] Although selected, she was prohibited from entering the Levia-Behemo temple before the final selection due to her past connections with Apocalypse.[2]

As the time for the final selection grew closer, Milky became prepared to kill Elluka Chirclatia, Ly Li, and Irina Clockworker so that she could obtain the position of 'Ma' for herself. Later on, Milky was hanged in a forest by Irina and died of asphyxiation.[3]

Following her death, it was determined that Milky had hanged herself to escape the terrible murder game occurring behind the scenes.[5] After murdering the rest of the potential candidates, Irina's crimes were discovered and she was selected to become the new Ma by default.[2] The lineage descended from Milky and Pale's child eventually led to Mikina Sfarz, who married a ghoul child identical to Pale named Keel Freezis, with their family going on to become among the most prominent businessmen in Evillious.

Consumed by her own eroticism, Milky embraced her life of prostitution,[6] using her career to obtain money and sex for her own pleasure.[3] Despite this, she did choose to carry her pregnancy with what was supposedly Pale Noël's child full-term, and strongly associated with him during their relationship together. Like the other potential candidates, Milky desired to become the country's new ruler and be granted the title of Ma, happily willing to even kill the others in order to succeed.[7]

Aside from her apparent popularity as a prostitute, Milky was proficient with wielding a flamberge despite the weapon's length surpassing her height.[3] Among the candidates surveyed for their viability, Milky was statistically the most balanced of the four. Despite this, her connections to Apocalypse gave her a poor reputation, and the Senate only reluctantly accepted her due to the successful case with Meta Salmhofer.[2]

Pale Noël: Milky's former lover. Entering into a physical relationship with Pale despite his illegal activities, both as a prostitute and as his mistress, Milky publicly ended the relationship sometime before joining Project 'Ma'. Despite this, her connections to him remained in question during the project. 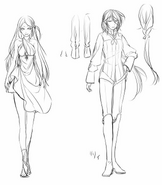 Milky with the other Ma candidates in Ma Survival