For the entity assumed to be Michelle, see Master of the Court.

"There’s nothing for it I guess, Papa’s a prominent judge."
―Michelle Marlon[src]

Michelle Marlon, also known as Sleep Princess, was the daughter of Gallerian Marlon and Mira Yarera. After going on a trip with her mother on the S.S. Titanis, a giant octopus attacked the ship and Michelle drowned in the ensuing sinking. Following her death, her father began collecting the vessels of sin. At the world's end, she forged a contract with Eve and began aiding Gallerian in restoring the world.

Michelle was born the daughter of Gallerian Marlon and Mira Yarera in EC 962. The following year, her parents were forced to marry due to the circumstances of her birth.[1] Living in the family mansion in Levianta, Michelle was mostly raised by her parents' servants Bruno Zero, Rennert, Katerina and Larisa.[2] In EC 964, the young Michelle was put to bed by Bruno before waking up to the sound of her parents' arguing.[3]

As she grew up, Michelle often offered to help the servants with the household chores. Sometime during her childhood, she read "The Daughter of Evil" by Yukina Freezis, enjoying the book. Later on, she saw a picture of her grandmother Elluka Clockworker.[2] At some point, Michelle posed with her parents for a photograph, smiling.[4] The young woman later noticed her parents' loveless relationship and became worried over it, although hiding her concern in public for fear of damaging Gallerian's reputation.[2]

"Tomorrow my wife and daughter would be returning from their trip."
―Gallerian Marlon[src]

In EC 978, Michelle was accepted into Levin University. In summer of that year, she greeted Tony Ausdin and Shiro Netsuma cheerfully at the door to her home, loudly calling to her father that the two soldiers had arrived before watching them enter. Later that year, Michelle suggested to her parents that they go on a trip before she started college, convincing her mother to go.

Meeting with her father in the mansion's living room regarding the trip, Michelle heard her father refuse due to having just become head judge and needing to work. Asked about the destination, Michelle explained she originally wanted to go to Maistia before deciding to go to Marlon to visit her grandfather, promising to call Gallerian every day. Whilst joking with her father about meeting strange men, Michelle heard Larisa announce that Ma had come to visit them and watched the Jakokuese woman step in and introduce herself.

Michelle then noted her resemblance to her grandmother, told by the woman that she had changed her face out of respect for Elluka. After hearing Ma mention that she had obtained youth and beauty with help of a place called Lunaca Labora, Michelle expressed a wish to go there herself to become beautiful. Ma then told her she didn't need to do so because she was already beautiful, and had turned out exactly how Ma thought she would.

Afterwards, Ma approached Michelle and stated she wanted to talk to her. Telling the woman about her travel plans, Michelle promised they would speak once she returned. The young woman then listened in as Ma asked Gallerian to sponsor a movie adaption of "The Daughter of Evil"; becoming excited at the mention of a movie, Michelle was offered by Ma to be cast as Michaela.

Three weeks later, Michelle boarded the S.S. Titanis with her mother. Sailing to Marlon, the girl stayed there for a time.[2] Later on during the ship's return trip to Elphegort, a giant octopus attacked the Titanis; as a result of the ship's destruction, Michelle drowned.[5]

Following the destruction of the Third Period in EC 999, Michelle reunited with her father Gallerian. They soon after met with Gammon Octo, of the Tasan Party, and Irina Clockworker, the being who once inhabited the Clockworker's Doll. The four of them decided to collaborate to save the world by invoking the Court ending, planning to do so by having Irina's twin children, Adam and Eve, enact a Re_birthday while Irina's soul possessed the reconstructed Evil's Theater.

As part of their plan, they also began seeking Ma, hoping to make her a pure being by merging the souls of the seven most compatible Demon of Sin contractors, including Michelle and Gallerian.[6] In order to facilitate this, Michelle forged a contract with Eve, obtaining her power so that she could put to sleep any souls that might get in the way of the hunt for the contractors.[7] Assuming the appearance of Margarita Blankenheim, "Sleep Princess" traveled to Toragay.

Channeling Eve's memories and personality, Michelle refined a Eighth Gift formula that could put souls to sleep. She then unleashed her new poison into the air, spreading it across the Evillious region as it put the souls of the Hellish Yard into a deep slumber.[8] Sometime after, when Gumillia gathered several of the sin contractors into the Hellish Yard, Gallerian summoned Michelle to them and she used Eve's hypnotism to puppeteer Prim Marlon into attacking.

When Prim was subdued, Michelle tried to spread Gift instead at Gallerian's behest; pained by the crisis of identity that using Eve's powers was causing her, Michelle dispelled the toxin and she fled with Gallerian,[7] traveling to the rebuilt Evil's Theater. Once Riliane Lucifen d'Autriche, Kayo Sudou, and Sateriasis Venomania came to confront her, Michelle calmly greeted them and led them further down the hall on the promise of an explanation.

Entering the interior room of the director's office, Michelle played with the twins Adam and Eve while Gammon and Gallerian spoke with the intruders. When Ma suddenly resurfaced from within Riliane, Michelle was absorbed along with the rest of the contractors.[6] Shortly before Ma's defeat, Michelle separated from the fusion.[9]

Following Riliane and Allen's creation of the Fourth Period, Michelle and her father stayed behind, gathering with the other souls at the Lucifenian Royal Palace.[10] She and Gallerian were later left by Arth to deal with the Tasan Party soldiers who were still causing trouble.[11]

"I'm home, Michelle. Were you lonely while Papa was gone?"
―Gallerian talking to the Doll[src]

After Michelle's death, Gallerian greatly grieved her loss, often staying inside her bedroom to remember her. Ma would later use Gallerian's attachment to Michelle to manipulate the judge, claiming that Michelle's soul had survived and was inside the Clockworker's Doll, and that Gallerian needed to collect all seven vessels of sin to heal her.

Gallerian then forged a contract with Adam Moonlit and began hearing a voice from the doll, believing the lie. Soon after, the judge began making underhanded court dealings in order to collect the vessels of sin.[12]

Years after Michelle's death, her half-sister Nemesis Sudou would later deride their father for believing that the doll was his Michelle, deeming him insane.[13] Following the destruction of the Third Period, Hänsel in another timeline impersonated Michelle during one of Gallerian's trials in the afterlife, utilizing the judge's affection for her in order to intervene during Allen Avadonia's trial.[14]

Raised with deep affection by her father, Michelle was a kind and cheerful young woman. Loving both her parents, she wished for them to be together as a family. Because of this, Michelle was concerned about her parents' clearly loveless marriage, although was careful not to show her feelings for fear of affecting their reputation. The young woman also made efforts to be helpful to her family's servants, offering to assist them with housework. Possessing an upbeat attitude, Michelle often acted visibly excited at the mention of one of her interests, some of which were movies and books by Yukina Freezis. Wanting to be beautiful, Michelle usually wore an archaic design as her preferred dress.[2]

Despite her apparent cheerfulness, Michelle's personality made her the most compatible contractor for Eve, the Demon of Sloth. Following her contract with Eve, Michelle became confused with her own identity, unsure of who she even was and channeling Eve's identity instead of her own.

Michelle was an exceptional student and excelled in her studies, becoming accepted to Levin University at the age of sixteen. She was also capable at housework and could lend a helping hand to her family's servants with the chores when necessary. Inheriting her mother's green hair and her father's graceful features, Michelle possessed a youthful beauty and was considered a candidate to be cast as Michaela in a movie adaption of "The Daughter of Evil". The girl also had a powerful voice and was capable of being quite loud.[2]

As a result of her contract, Michelle wielded Eve's power as her own, including her hypnosis and control over Gift. However, this came at the cost of confusion over her own identity, as well as her sometimes becoming incapacitated when using her powers due to her heart going to Eve. She was additionally able to break the boundary between the Hellish Yard and the Third Period, as well as teleport in a flash of light.[7]

Gallerian Marlon: Michelle's father. Michelle had a closely affectionate relationship with her father and was cherished greatly by him. As a result, she had a desire to see him succeed in his ambitions and was mindful of protecting his reputation. Despite this, she was worried about his poor relationship with her mother.

Mira Marlon: Michelle's mother. Michelle was close to her mother, but often worried about her relationship to her father, as the two rarely spoke and seemed to be on bad terms.

Bruno Zero: A butler who worked for her family. Being raised in part by Bruno, Michelle was close with him and would often help him and the other servants out when they had their hands full.

Eve: The Demon of Sloth that she forged a contract with at the end of the Third Period. She made use of Eve's power to aid Gallerian in restoring the world, and channeled her personality to the point of being unsure of who she was.

Concept art of Sleep Princess in Seven Crimes and Punishments

Michelle's profile in Deadly Sins of Evil: Judgment of Corruption

Profile of Margarita Blankenheim in Deadly Sins of Evil: Master of the Heavenly Yard
Add a photo to this gallery 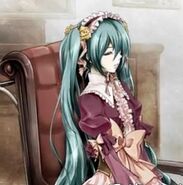 The awakened Clockworker's Doll seen as Michelle in Judgment of Corruption

Gallerian hallucinating that he embraces Michelle in The Muzzle of Nemesis

Michelle drowning in the PV

Sleep Princess as she appears in Seven Crimes and Punishments

Sleep Princess on the cover of Seven Crimes and Punishments

Sleep Princess as seen in the story

Michelle as she appears in Deadly Sins of Evil: Judgment of Corruption

Sleep Princess as she appears in Deadly Sins of Evil: Master of the Heavenly Yard
Add a photo to this gallery

Sleep Princess as she appears in Seven Crimes and Punishments!
Add a photo to this gallery

Sleep Princess as seen in the Seven Crimes and Punishments album 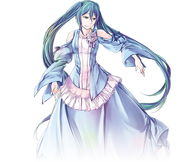 Sleep Princess' profile on the Seven Crimes and Punishments website

Michelle on an announcement poster posted by PHP Comix for Deadly Sins of Evil: Judgment of Corruption

Retrieved from "https://theevilliouschronicles.fandom.com/wiki/Michelle_Marlon?oldid=189919"
Community content is available under CC-BY-SA unless otherwise noted.