"My children are nowhere to be found!"
―Meta Salmhofer[src]

Meta Salmhofer, also known as The Witch of Merrigod, was one of the Four Horsemen of Apocalypse and the mother of Hänsel and Gretel. Created by Seth Twiright, the ghoul child fell in love with Pale Noël and joined his criminal organization, spreading terror and malice in her wake. After being captured and scheduled for execution, Meta accepted a plea bargain to become part of Project 'Ma'.

A ghoul child created in BT 022 by Seth Twiright,[1] Meta grew up alone;[2] in BT 002 she met Pale Noël and became his lover,[3] joining his criminal organization Apocalypse and moving into their base at Merrigod Plateau, becoming close friends with Raisa Netsuma.[4] She then became involved in numerous riots staged across the Magic Kingdom Levianta. Causing bloodshed and murder in her wake, Meta eventually earned the name "The Witch of Merrigod".[5]

Later on, Meta crossed paths with Eve Moonlit and was distracted long enough to be captured and imprisoned by Leviantan forces.[6] Condemned to death, Meta was approached by Seth Twiright while awaiting execution in her cell and was offered exoneration in exchange for becoming a test subject for Project 'Ma'.

After accepting, she went to the Magic Kingdom's royal institute, and was impregnated with the seeds of god, giving birth to twins Hänsel and Gretel on December 27, EC 0. Sometime during their development, Meta had second thoughts about letting the children be used after recalling her own origin as a ghoul child; as a result, she stole them from the laboratory and fled to Elphegort.[5]

Starting a new life in the foreign country, the fugitive mother hid with her children away from people's eyes in Held's Forest.[7] A year later, in EC 001, Meta took her children out on a moonlit night through the forest; after putting them on the ground and leaving them for a moment, the witch returned to find them gone.[8]

Shortly afterward, she discovered that Eve Moonlit had run off with her twins and began chasing her through the forest. Just as Meta finally caught up with her in front of her home, the terrified Eve lashed out and Meta died at the witch's doorstep.[9]

Shortly after Meta's death, the disillusioned Eve realized her sin,[10] having believed that Meta was a bear the entire time. With Meta dead, Eve and her husband Adam raised the children in her place. The twins later killed the two before going on a search for their "real" mother and father.[11] Centuries later, Ma speculated that the reason Hänsel and Gretel's reincarnations, Arte and Pollo, were so loyal to Banica Conchita was because of her resemblance to Meta.[12] After Mayrana Blossom became the second member of Père Noël, she chose the designation "Fourth Shadow" in reverence to Meta's rank in Apocalypse.[13]

In history, stories of Meta and her relation to Merrigod Plateau were recorded in a number of literary works, saying she had plunged the Magic Kingdom Levianta into chaos.[14] A cult faction also developed within the Levin Church, revering Meta as the holy virgin mother of the Twins of God. The leaders of the dominant Levia sect quickly suppressed these beliefs, asserting Church doctrine that Meta was merely a witch associated with Apocalypse. The Levia sect's oppression of the cult's heresy later resulted in the creation of Neo Apocalypse and the New Four Horsemen Incident.[15]

Since the time she was born, Meta felt alone and unloved, wanting affection for nearly her entire life. Having survived for so long on her own, the girl became opportunistic, willing to do anything to survive or get what she wanted; as a result she was always attempting to escape her circumstances, such as initially joining Project 'Ma' to escape execution. In addition to this, her attraction to Pale as well as her own sadistic nature as a HER lured her to join Apocalypse and become a wanted murderer like him.

After being captured and imprisoned, Meta was left heartbroken, eventually realizing her relationship with Pale was one-sided and corrupt from the start. As time went on, she began to recognize her constant attempts to run away from her circumstances had ultimately amounted to nothing. Meta also became attached to her children and sympathized with their similar circumstances of birth. As a result, she desired to love them the way that no one had ever loved her and prevent them from being used. Even though she believed her feelings were selfish, Meta felt embittered by her circumstances and ultimately chose to take them and escape from Levianta.[16]

Meta was a powerful witch with a rare amount of magical power that caught the attention of Seth Twiright, allowing her to be the second candidate for Project 'Ma' and the first to successfully give birth to the twins for the Project.[5] Among her magical abilities included the powerful Swap Technique, allowing her to transfer a nearby soul, including her own, to another nearby body or object at will.[17] She was also capable of fleeing from the Magic Kingdom without being recaptured and successfully hide out with her children for about a year.[5]

Eve Moonlit: Meta's predecessor. Meta was shocked by Eve's bloodstained appearance at their first meeting, which is what caused her to be caught and arrested. When meeting her again, Meta viewed Eve only as the thief that was stealing her children as she pursued her.

Pale Noël: Meta's lover. Starved for affection, Meta fell madly in love with Pale and, due to this love, joined the Apocalypse organization despite the many crimes it perpetrated. At some point, however, she became disillusioned with her one-sided affection for him, recognizing that he did not truly reciprocate her feelings.

Seth Twiright: Meta's partner and creator. Meta was at first astonished by Seth's resemblance to Pale, but saw him only as a last chance to escape her execution. Although she went along with Project 'Ma' at his request, she did not share his goals or ambitions and did not spare him another thought once she'd resolved to run away with the children.

Hänsel: Meta's son. After his birth, Meta grew to love him as she realized the depth of their connection, and wished for him to have a life better than hers. She became greatly concerned for Hänsel's emotional and physical well-being, taking him from Project 'Ma' to live a normal life and pursuing his abductor until her death.

Gretel: Meta's daughter. After her birth, Meta grew to love her as she realized the depth of their connection, and wished her to have a life better than hers. She became greatly concerned for Gretel's emotional and physical well-being, taking her from Project 'Ma' to live a normal life and pursuing her abductor until her death. 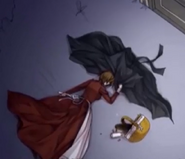 Meta after she is killed by Eve Moonlit in Moonlit Bear 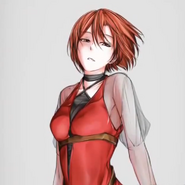 Meta Salmhofer as she appears in Escape of Salmhofer the Witch

Meta donning a cloak as she flees Levianta

Meta in the Waltz of Evil: The Deadly Sins of Evil Guidebook 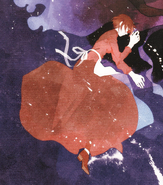 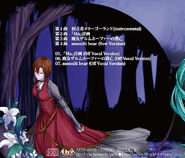 Meta in the trailer for Original Sin Story: Complete Edition
Add a photo to this gallery

Retrieved from "https://theevilliouschronicles.fandom.com/wiki/Meta_Salmhofer?oldid=192356"
Community content is available under CC-BY-SA unless otherwise noted.