Memento is a compiled manga volume released by Ichika on December 31, 2010. It is composed of multiple short manga based on the songs Ichika has drawn artwork for, including several songs from the Evillious Chronicles. Each story follows Ichika's personal interpretation of her individual works. 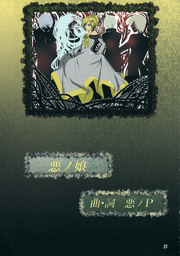 A story based upon the song of the same name. In it, the evil princess Rin hears the bell for teatime before being presented with a petty criminal. The man yells at her complaining on the food shortage and that they barely have bread to eat. Rin then says that if they don't have bread, they could eat cake instead. The man is shocked at this response and calls her The Daughter of Evil to her face. Rin does not disagree with him and watches as he is beheaded before her eyes. 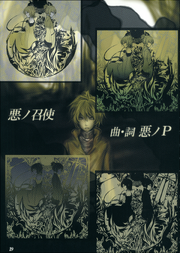 A story based upon the song of the same name. As revolution breaks out in the kingdom, Len resolves to protect his princess and strips off his hair tie. Disguised as Princess Rin, Len approaches the guillotine despite the red swordswoman's pleas. Remembering his final moments with his twin, the servant hears the bell toll before saying: "Oh, it's teatime!"

Tale of Abandonment on a Moonlit NightEdit 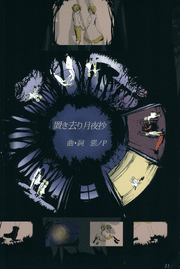 A story based upon the song of the same name. Left alone by their parents who told them to stay put, the two wander endlessly before stumbling upon a glass bottle. Filling it with moonlight, they walk and walk endlessly through the forest while keeping one another company. Suddenly, they find a small house in the woods, which they believe to be the house of a witch. They decide to kill her and, together, reach to open the door. 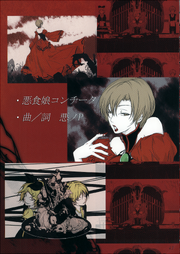 A story based upon the song of the same name. Bursting into the room, the chef yells for Conchita. Disgusted by the bodies he has seen around the estate, he asks for a vacation. Conchita's maid happily appears from behind the chef and enters the room with her brother. The conversation between Conchita and her servants brings him to the realization of her cannibalism. Horrified, the chef is killed as a "traitor" and cooked as her next meal, much to her glee. 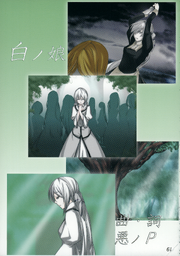 After unwittingly discovering her friend's secret, the enraged white-haired girl prepares to stab the lonely girl when an apparition of a mysterious child appears to stop her. When the girl turns around, she sees the white-haired nun standing there, the knife hidden behind her back. As the two converse, her lonely friend asks if she could teach her how to make brioche. As the white-haired girl explains her reasons for that night, she questions who the boy she saw was. 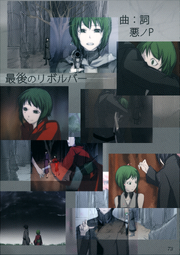 Receiving her orders to kill the man she loves, the assassin struggles with the situation before her, endlessly apologizing to him in her mind as she prepares to make her mark. At the last moment, he approaches her, saying he wishes to stand beside her forever. Shaken as she shoots her lover, she promises to be together with him soon before turning the gun on herself. 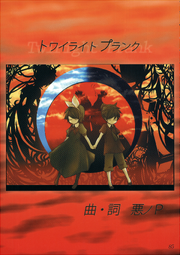 On the beach, a boy finds a box buried in the sand with a message about a secret legend of the sea. Unable to go out and play, the boy comforts his glum twin sister and she relates how she wishes to become like a ruler she read about in storybooks. Asking that they split the day and night between each other, he accepts her wish, and the demon from the box hushes the reader of the ominous fate the two make for themselves.

The Daughter of Evil looks down upon the man with disdain

Gleefully, she amuses herself with him as he argues

As he is beheaded, she demands he kneel to her
Add a photo to this gallery

The Servant of Evil watches the revolution take place

The Red swordswoman torn by the servant's execution

The two children were taken and abandoned in the forest

With a moonlit glass bottle they walk aimlessly for home

Finding a house in the woods, they realize it is the witch's home
Add a photo to this gallery

The chef disrupts Conchita in her quarters, wineglass in hand

The servants demand the chef give respect to "great" Conchita

Banica smiles before the chef is killed, cooked, and served to her
Add a photo to this gallery

The Daughter of White discovering her friend's identity

Stopped by a mysterious boy, she hides the weapon

She sees her friend is like she was, alone and very sad
Add a photo to this gallery

Given her orders, the assassin reflects on her task

Realizing her actions, he smiles and tries to comfort her

In his final moments, he admits he wants to be beside her
Add a photo to this gallery

Retrieved from "https://theevilliouschronicles.fandom.com/wiki/Memento?oldid=190272"
Community content is available under CC-BY-SA unless otherwise noted.