"The lady of the Miroku shop was such a hard worker, and so well liked."
―Oyuka[src]

Mei Miroku was a draper of Enbizaka, Jakoku and the proprietress of the Miroku Shop. Marrying Kai Miroku at a young age, Mei helped her husband manage their dry goods business, becoming well acquainted with their business rival, Kayo Sudou. Following the great fire that struck the town, she helped her father treat the survivors.

"Oh goodness, it's embarrassing... I always leave going outside to my wife while I just confine myself to our home working."
―Kai Miroku[src]

Mei was born in Enbizaka, Jakoku sometime during the EC 800s, the daughter of a doctor and a Lucifenian woman. As she grew up, Mei became knowledgeable in medicine under the tutelage of her father. After her mother passed away, Mei married Kai Miroku at sixteen and began aiding her husband in his dry goods business, running errands while he worked at the store. During this time Kai gave Mei a red kimono he tailored as a gift, and she often wore it. The two also sired two children, naming them Miku and Rin. Learning about the amazing skill of the local tailor Kayo Sudou in EC 838, Mei began secretly requesting she tailor the more difficult orders for them.[1]

"My home is on the other side of the river, so fortunately it hasn’t been caught up in the fire at all, but my husband’s suffered some light burns."
―Mei[src]

When a huge fire struck Enbizaka at the end of that year, Mei and her daughters remained at home while the fire ravaged the main town on the other side of the river. Kai later came home, sustaining burns on the back of his left hand. When her father began treating the injured at his clinic, Mei joined to help the victims there. In the process, Mei treated the badly burned Kayo and learned neither her husband nor her son had survived. When Kayo awoke, Mei reluctantly had to share this news to her and witnessed the woman's subsequent breakdown.[1]

After the Freezis Foundation helped rebuild the entire town, Mei arranged for the foreign firm to have Kayo's home outfitted with tailoring supplies and furniture, attempting to reconstruct the interior as close to its original appearance as she could remember.[2] She also began dealing directly with Perrié Cutie Marlon of the Freezis Trading House, receiving from her numerous orders for kimono.[3]

"Because you are coming back here after four years have passed, Kayo-san…My mother was concerned for you."
―Miku to Kayo regarding Mei[src]

Once she learned Kayo was finally returning to Enbizaka in early EC 842, Mei instructed Miku to welcome the woman at her rebuilt tailor shop. Several weeks later, Mei and Kai went out while Miku went on a date with Kiji Yarera, leaving Rin to watch the house while they were gone.[2] Later that year, Mei fell ill and became bed-ridden; diagnosed with a cold, she rested at home while Rin watched over her until she recovered.[4] By spring, she returned to work. As Mei continued dealing with Perrié at the Freezis Trading House, she often heard about her plan to capture the mermaid said to live in the area.[3]

One day, Mei walked down the main street with her husband. After crossing into the main town, she began fussing over the burns on Kai's hand, to his protest. As they discussed the fire, the nervous Mei began to question why Kai was out on that fateful night unlike any other night, hearing him claim it was just to admire the scenery. As she became upset over their discussion and the deaths of the fire, Kai tried to bring them back home, only for Mei to tell him she had business at the Freezis trading house. After briefly discussing Perrié's obsession with mermaids, as well as Kai apologizing for making Mei deal with a foreigner, the two bid each other farewell and Mei left for the trading house.[3]

Around midnight, Mei began heading back home, only to be stopped on the road by a silent Kayo. As Mei realized the ominously approaching woman intended to kill her, she turned to flee, only for Kayo to catch her and stab her repeatedly in the throat with a pair of scissor blades. Although resisting, Mei was finally killed with a stab through the chest.[3]

Immediately after her death, Mei was stripped of her torn kimono by Kayo, who retailored the red dress for herself; her naked corpse was later discovered in the main street the morning after her death and rumors quickly spread throughout Enbizaka. Detective Eikichi Akagi and Constable Uibee began investigating the case, inferring her murder was done with some sort of blade.[3]

Kayo later murdered Mei's daughters, wearing all three women's articles of clothing while confronting Kai before murdering him as well shortly before her arrest. During her trial, Kayo claimed she had murdered Mei and her daughters because they were in an affair with her husband. She was soon after convicted and executed for her crimes.[5] When Gakusha asked about Kayo's gibbeted head, the monk was told about her ghastly murder of Mei and the other Mirokus.[6]

"Well, you, Miku, and Rin were safe due to staying at home. Fortunately, the fire didn't cross the river. That in itself was a good thing."
"... But, a lot of people died."
―Kai and Mei[src]

Mei was a kind and compassionate woman, dedicated to helping others over herself. Having been born to an interracial couple, Mei made no distinction between the native Jakokuese and foreigners from Maistia and Evillious, treating everyone with a charitable demeanor. This openness and generosity extended to business as well, readily requesting the help of Kayo Sudou despite theoretically being the Mirokus' business rival.[1]

Her compassion led her to be devastated by the amount of deaths that had occurred during the fire, not content with the fact that she and her family had survived, and did all she could to help the survivors and Kayo in particular. Mei was similarly good at reading others, becoming suspicious of her husband's attitude and quick to determine Kayo's murderous intent.[3]

"I was actually raised from a family line of doctors. So I had that influence…"
"Ah, so you’re similar to my own Mei in that regard, hm?"
―Bufuko Tsukimoto and Mei's father[src]

Due to her being the daughter of a doctor, Mei was knowledgeable about medicine, allowing her to assist her father in treating patients. As the madam of the Miroku family, Mei was proficient at business, running errands and the day-to-day public interactions with their customers with a dedicated fervor. Because of these skills and her likeable personality, the young woman demonstrated some adequate social skills and bedside manner.[1]

Kai Miroku: Mei's husband. Mei loved Kai deeply and the two shared an affectionate relationship, the woman constantly wearing the red kimono he made her for their wedding. Despite this, she began to grow concerned over her husband's suspicious role in the Great Fire and his hatred of foreigners. She also wasn't above hiding things from him, such as her frequent business with their rival Kayo.

Miku Miroku: Mei's daughter. Like any mother, Mei loved and cared for her daughter deeply.

Rin Miroku: Mei's daughter. Mei loved Rin deeply, and was watched over by the latter when she became sick.

Kayo Sudou: Mei's acquaintance and later killer. Mei maintained a cordial relationship with the tailor, impressed with her skill enough to occasionally request her to do work for them despite their rivaling businesses. After the fire, the woman tried her best to comfort Kayo and help her heal from her family's death before being murdered.

Mei's profile in Deadly Sins of Evil: The Tailor of Enbizaka
Add a photo to this gallery

Mei as she appears in The Tailor of Enbizaka 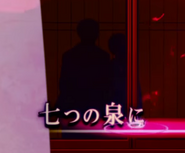 Mei as she appears in Waltz of Evil: The Deadly Sins of Evil Guidebook

Mei on the cover of Deadly Sins of Evil: The Tailor of Enbizaka

Retrieved from "https://theevilliouschronicles.fandom.com/wiki/Mei_Miroku?oldid=192129"
Community content is available under CC-BY-SA unless otherwise noted.