The Evillious Chronicles Wiki
Register
Don't have an account?
Sign In
Advertisement
in: Characters, Characters Represented by MEIKO, Humans,
and 12 more
English

"Agh, enough, enough. I don’t want to waste my time with such a worthless debate. We need to resolve what’s going on in Asmodean right now as soon as possible. That is the most important issue."
―Maylis[src]

Maylis Beelzenia was the Third Princess of the Beelzenian Empire and one of Duke Sateriasis Venomania's many victims. In response to the number of disappearing women in the Empire, Maylis employed several agents to investigate, including Count Karchess Crim, and tracked their progress. After one of her agents was seduced by Sateriasis, Maylis was also captured and added to his harem.

Born in EC 114 as the youngest daughter of Emperor Jupitaire Beelzenia, Maylis was spoiled by her father and grew up lavishly in the imperial palace as the Third Princess of the Beelzenian Empire, meeting Princess Yufina Marlon around the time she was betrothed and married to Maylis' brother, Prince Martius Beelzenia. She eventually began helping manage the empire's territories. During this time, she met and became disturbed by the ogling Marquis Ferdinand.[1] After Baron Tae Conchita was assigned as her retainer, Maylis developed a crush on him after some time.[2]

"Heheh... this has become quite the intrigue, hasn't it?"
―Princess Maylis[src]

In EC 136, Maylis happened to fill in for Janus in listening to a report from Marquis Claster Glassred. Learning of the Venomania Family massacre and the subsequent disappearances of several women, Maylis became interested and launched a secret investigation. She then ordered Claster to look into the matter and use her resources at his disposal; she also assigned Tae to handle all the investigation reports.[2]

When King Martius and Queen Yufina visited the imperial palace in March of EC 136, Maylis joined her sisters Febria and Aprilis in welcoming them in the throne room, immediately greeting Yufina. Seeing Yufina look unhappy with her husband, she insisted on giving her a tour around the palace to get her away from the others, comforting her over her dissatisfaction with her arranged marriage. As they talked, Tae Conchita interrupted the ladies and, although hesitant in Yufina's presence, reported to Maylis that Claster Glassred had gone mad.

Maylis listened in shock as he explained the marquis' household was massacred and his daughter disappeared, finishing that they would likely need someone to replace him in the investigation. Maylis and Tae then discussed the possibility of assigning Duke Sateriasis Venomania, Maylis expressing her worry of pushing him too hard due to the similar massacre of his family. When Marquis Ferdinand was suggested instead, Maylis reluctantly agreed and Tae left to arrange his appointment. Maylis then spoke with Yufina and learned of her future tour to meet the Five Dukes of Beelzenia, advising her to visit Asmodean only briefly due to the danger. They then continued on their tour of the palace.[1]

Afterwards, Maylis had Marquis Ferdinand begin investigating the disappearances in Claster's stead. When the Donald estate was attacked and Yufina went missing as well, Maylis began taking the matter more seriously. Following the disappearance of Lilien Turner and the murder of Marquis Ferdinand, both being from Mystica, Maylis reasoned that the culprit was one and the same.

Later on, she received a report from her spy, Neruneru Nerune, who had inconclusive results. Asking Tae how Martius was, the man having gone back to Marlon, Tae replied that he was considering hiring Elluka Clockworker. Not believing in magic, Maylis brushed him off and expressed her frustration with there being no one left to work with; Tae then replied he had someone in mind, bringing Karchess Crim into the room.

Soon after, Karchess told Maylis of his affair with Yufina, Maylis being entertained by his actions. She then allowed Karchess to help with their investigation, giving him all the documents they had. As the reports included information about Yufina's disappearance, Maylis cautioned him to treat them with discretion. Once Karchess left the room, Maylis continued laughing about the affair, although agreeing to keep it a secret from Martius after being advised so by Tae.[2]

"...Sateriasis Venomania! You are the culprit behind the serial disappearance of women!"
"Oh my... Impressive that you found me out... It seems you are much shrewder than I had thought."
―Maylis confronts Sateriasis[src]

Later on, Neruneru directly requested a private audience with Maylis to share a new fact about the investigation, although with no chance of that happening gave up and went back to Asmodean. Maylis, feeling that it was important, and wanting to sneak out of the castle anyway, slipped out of the palace and traveled to Asmodean.

Meeting up with Neruneru at a bar on the outskirts of Lasaland, Maylis made small talk with Neruneru before asking her to share her new finding. With Neruneru instead advising her to go to Duke Venomania's mansion herself for the information, Maylis became suspicious, but ultimately decided to go.

At the Duke's mansion, Maylis was welcomed inside by the Duke, who strangely said he wanted to take her as his wife. Maylis then accused Venomania of being the culprit, surprised that he admitted to it despite her bluff. As she argued with Venomania over his delusional justifications for his abductions, Maylis was ultimately put under the Duke's Lust spell, becoming the eighteenth member of his harem.[2]

When the disguised Karchess successfully stabbed the duke, Maylis broke free of his spell and fled the mansion with the others.[3] Soon after fleeing, Maylis discovered her pregnancy and the imperial family covered up the issue. While her family demanded she abort the child, Maylis refused; as Emperor Jupitaire refused to include the baby as part of the family, she gave the baby girl to Tae and his wife to raise as their own.[4]

Following her death, Maylis' soul was sent to the Heavenly Yard and remained there with her family and friends;[5] over the centuries, she heard tales of her later descendants such as the cannibal Banica Conchita.[6] In EC 999, she and the other souls were pulled back to the Third Period as the ground world merged with the Hellish Yard.[5] Afterward, the conflicted princess returned to Duke Venomania's mansion in Lasaland and agreed to rejoin Sateriasis' harem along with Mikulia, Gumina, and Lukana.[6] Some time after, the Master of the Hellish Yard visited and took Venomania back to the bowels of the Hellish Yard.[7]

Maylis and the Duke's resulting bloodline survived as part of the Conchita Family,[4] eventually producing Banica Conchita, who later became famed for her contributions to Beelzenian culture and society as both "Gourmet Noble Banica" and "Evil Food Eater Conchita". Another one of her descendants from Banica, Germaine Avadonia, eventually led the Lucifenian Revolution and was heralded as a hero.[8]

"Ha ha, well well, you need say no more! Political marriages... It’s an inevitability of women in our position, eh! Aahh, I’ll probably end up being forced to marry some low-bred bore someday too!"
―Maylis to Yufina[src]

Maylis was a playful but earnest individual. Doted on by her father, Maylis was raised knowing she had no chance of inheriting the throne; this encouraged her to develop a carefree attitude and not put on any airs of nobility. As such, she endeavored to enjoy what she considered to be her freedom before being married off. Maylis' nonchalance, coupled with her headstrong personality, made it difficult for her to get along with the stricter individuals of high society, with her retainers quitting their position before she met Tae.[2]

Maylis had a cheeky demeanor when around Yufina, although knowing how to conduct herself with formality when needed.[1] As part of her playfulness, Maylis treated the massacres and disappearance cases like a game while she investigated them,[9] although starting to take it more seriously after Yufina disappeared.[2]

A shrewd princess, Maylis took advantage of her resources effectively and her curiosity helped in her dedication to the disappearance cases. Willing to take advice from others, Maylis was unbothered by bringing in the foreign Karchess Crim to the investigation on Tae's recommendation. However, she also displayed naivety, trusting too greatly in Neruneru without considering an ambush and, like the other women, became helplessly enthralled by the Duke.[10]

Sateriasis Venomania: Maylis' abductor. Maylis fell in love with the duke due to the powers of Lust. After Karchess killed the duke, his power over her was broken and she fled, horrified by his exploitation of her. She looked back on their relationship with revulsion, maintaining her hatred well into her afterlife. Despite this, Maylis still loved the child she sired with him and, paradoxically, decided to stay in his harem when the Hellish Yard merged with the Third Period.

Tae Conchita: Maylis' retainer and closest adviser. Touched by the fact that he continually served her despite her former retainers quitting, Maylis maintained a close relationship with Tae, initially loving him like a brother. This love, however, eventually turned romantic; despite this, Maylis respected that Tae was married and kept her feelings to herself. Tae would eventually go on to raise Maylis' child.

Yufina Marlon: Maylis' sister-in-law. Maylis took a quick likening to Yufina, sympathizing with her disinterest in her brother Martius and relating to her plight with the knowledge that she too would be arranged to be married off one day. As such, she was concerned for the queen's welfare as she toured to meet the Five Dukes and wished her well before her kidnapping.

Karchess Crim: Maylis' agent. Maylis trusted Karchess with investigating the disappearances of the women in Beelzenia due to Tae Conchita's recommendation, however she expressed disinterest in his later results.

Neruneru Nerune: Maylis' spy and later fellow member of Venomania's harem. Maylis relied on Nerune to deliver more reports about the missing women before she was seduced, and their connection eventually led to Maylis' own abduction.

Concept art of Maylis for The Lunacy of Duke Venomania 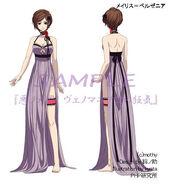 Concept art of Maylis for Seven Crimes and Punishments 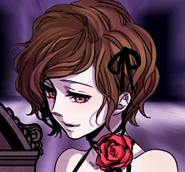 Maylis as she appears in The Lunacy of Duke Venomania

Maylis in Seven Crimes and Punishments

Maylis in the back cover of Deadly Sins of Evil: The Lunacy of Duke Venomania

Maylis's profile in the light novel

Princess Maylis in The Lunacy of Duke Venomania manga 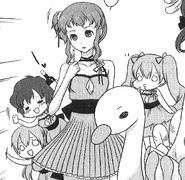 Maylis as she appears in the Deadly Sins of Evil manga

Maylis as seen in Quartets of Evil

Illustration of Maylis in Evils Kingdom

Maylis on a poster for Deadly Sins of Evil: The Lunacy of Duke Venomania