The Evillious Chronicles Wiki
Register
Don't have an account?
Sign In
Advertisement
in: Magic, Items, Magic Tools,
and 12 more
English 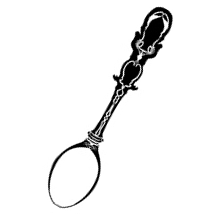 The Marlon Spoon[note 1] was one of the Vessels of Sin, inhabited by the Demon of Greed. Gallerian Marlon was among its most prominent owners, infamous for causing the Dark Star Scandal.

Originally a magical spoon owned by the wife of Raiou Zvezda, it was eventually bequeathed onto her adoptive daughter Eve upon her death. As Eve lived in the village of Nemu, she used the spoon to both seal and amplify her powers when needed. After the Apocalypse general Meta Salmhofer massacred her village, Eve accompanied Adam Moonlit back to Alicegrad and took the spoon with her.[1]

After the two fled to Elphegort, they made a small home in Held's Forest, furnishing it with some of their belongings from Magic Kingdom Levianta, including the spoon. In EC 001, she used the spoon's powers to kill Meta, whom she perceived as a bear.[2]

When Hänsel and Gretel created the Vessels of Sin in EC 014,[3] a blue spoon was used as the vessel for the Demon of Greed. Afterward, the twins released the vessels into the world.[4] The spoon eventually ended up in the Kingdom of Marlon.[5] At some point, a blacksmith discovered the spoon and tried to reforge it into a fork; he was then possessed by the demon and died.[6]

The spoon was later collected around the EC 480s by Queen Prim Marlon. In EC 492, the Queen took the spoon with her to Yatski in Elphegort and gave it to Mikina Freezis. Through the spoon's power, wealth was attracted to the woman and the Freezis Family's shop in Aceid became enormously popular across the Evillious region.

In EC 494, Mikina inadvertently forged a contract with the Demon of Greed in her desperation to have her son Shaw Freezis for herself, activating the spoon's powers and incinerating her father, his henchman, and the nanny who betrayed her, along with slightly scorching Shaw's back. The demon was later exorcised by Abyss I.R. and returned to its vessel.

In EC 505, Abyss I.R. possessed Mikina and used the Marlon Spoon to fight through the guards at Lioness Castle. After rendering everyone assembled in one of the bedrooms unconscious, the mage stole the vessels of sin gathered there and fled with the spoon to Lucifenia. When Mikina's consciousness resurged and regained control during the sorceress' battle along the coastline two weeks later, Abyss invoked the link between Mikina and the Demon of Greed via the spoon to suppress her will again.

The mage then attempted to kill Yukina Freezis with the spoon's flames before being interrupted by Rin. When she attempted to use the spoon again afterward, the Demon of Gluttony intervened to cancel out the spoon's power. After Abyss I.R. was defeated,[7] Elluka Clockworker and Gumillia collected the spoon from Mikina and subsequently sealed it.[8]

Sometime after the Duel of Merrigod Plateau, the spirit of Adam Moonlit ended up in the spoon, replacing the absent demon.[9] The spoon later came into the possession of Mata Corpa; after Ma killed the man and stole the spoon, she was convicted by the Dark Star Bureau and the spoon was put in evidence lockup.[10]

In EC 978, Ma stole back the spoon and gave it to Judge Gallerian Marlon, who subsequently forged a contract with Adam.[9] The judge then kept with him in his breast pocket at all times.[11] Then, Gallerian amassed a fortune for himself through corrupt dealings in the courtroom in his pursuit to collect the vessels of sin.[12] The vessel was later stored in the judge's home.[13]

Evil's Theater and the World's End[]

Following the completion of Evil's Theater in December of EC 982, the spoon was transferred there along with the other vessels of sin. When the theater's clocktower broke down in EC 990, Gear sacrificed his heart and siphoned the powers of the Marlon Spoon to the doll, confining him to the clocktower.[14] After the destruction of the Third Period in EC 999, Michaela summoned all seven vessels together for Allen Avadonia.[15] The Demon of Greed later gathered with the other demons in Marlon, staying there with Michaela.[16]

Similar to the other vessels of sin, the Marlon Spoon served as a container for the Demon of Greed's essence and allowed the demon to possess or influence a host.[17] From the spoon, the demon was able to fuel its owner's greed and desire for riches.[12] As the demon was the source for the Marlon Spoon's power, sealing the vessel subsequently sealed the demon and left the object powerless.[17]

The Marlon Spoon had the ability to naturally attract wealth to its owner, allowing them to easily be presented with situations that are financially beneficial. It was also capable of conjuring flames at its wielder's bidding; the flames could consume or entrap opponents. According to Prim, using the spoon's powers would also cause the host to form a contract with the demon and become possessed by the Demon of Greed, with the demon devouring the souls of the contractor's loved ones over time.[7]

According to Ma, the vessel was necessary for Gallerian to speak with his "daughter", the Clockworker's Doll.[11] Like all the vessels of sin, the Marlon Spoon was able to kill a demon contractor through the Demon of Greed's power.

Concept art for the spoon by mari no hito

Illustration and description of the spoon in Entr'acte of Evil: The Daughter of Evil Worldguide

The vessel of Greed as depicted in Chrono Story

The Marlon Spoon as it appears in Handbeat Clocktower 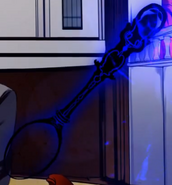 The Spoon as it appears in Seven Crimes and Punishments

The Spoon as it appears in Project 'Ma'

The Marlon Spoon in The Daughter of Evil: Praefacio of Blue

The Spoon in The Daughter of Evil manga

The Spoon as it appears in Quartets of Evil

The Marlon Spoon as it appears in the manga

The Spoon in a cage by Suzunosuke

The Marlon Spoon in the cover of Evils Kingdom

The Marlon Spoon in the Seven Crimes and Punishments album booklet

The Spoon on the cover of the Clockwork Lullaby album