The Evillious Chronicles Wiki
Register
Don't have an account?
Sign In
Advertisement
in: Groups, Families, Marlon Family,
and 18 more
English 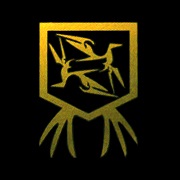 The Marlon Family[note 1], originally known as the Marlon Royal Family[note 2], was the royal lineage that ruled the Kingdom of Marlon. Following Maistia's independence, the royal family was supplanted by the Viwirtz Family, remaining as a powerful noble family thereafter although eventually declining over the centuries.

Following its foundation, the Marlons became the rulers of the Kingdom of Marlon, governing from Marlon Castle and standing in constant opposition to the Kingdom of Lioness; at some point, the royal family came to possess Grim the End as a treasured heirloom. In EC 110, Princess Yufina was born and later married to Martius Beelzenia to adopt a male heir into the family. After the king's death, Martius ascended the throne with Yufina as his Queen. In March of EC 136, Yufina was abducted by Duke Sateriasis Venomania whilst visiting the Beelzenian Empire.[1]

After Count Karchess Crim assassinated the Duke and freed Yufina in the same year,[2] the two eloped while being hunted by King Martius and the Beelzenian Imperial Family. Yufina later supported her new husband in establishing a new "legitimate" Marlon to overthrow Martius' government in EC 139, successfully deposing the Beelzenian ruler and reinstalling the royal family's bloodline to power.[3] After Karchess' death, his grandchild took over the throne.[4]

During the latter half of the third century EC, King Charon assumed the throne and sired three children with Queen Milkicent, the youngest being Prince Carlos in EC 296.[5] At some point, the family learned from a shaman living in the Millennium Tree Forest how to combine Ziz Tiama ink with the magical shavings of Grim the End to create a powerful healing elixir.[6] The King later betrothed Carlos to Banica Conchita in June, EC 311 to improve relations between Marlon and Beelzenia.[5] In February of EC 312, the engagement was dissolved following Banica's disgusting behavior during a formal dinner.[7]

Afterward, King Charon declared war on Lioness with Beelzenia. Carlos was later captured by Lioness and coerced to become his former fiancée's cook in early EC 325. A few months after impregnating her with a child, the chef died committing a botched murder-suicide.[8] Lioness was later defeated and the royal family successfully conquered the entire Marlon island.

Over a century later, the King of Marlon married and had several children prior to his wife's death. He married Prim Rogzé and sired another child, Prince Kyle, in EC 474. Around the same time, the Marlon King kept multiple mistresses, having children with several of them. While visiting the Kingdom of Lucifenia, Queen Prim seduced King Arth and gave birth to his child, Ney, in EC 482. To avoid exposing her infidelity, Prim gave her golden-haired daughter to their new royal court mage Abyss I.R.

In the late EC 480s, the royal family agreed to betroth Kyle to Princess Riliane of Lucifenia. In December of EC 491, Ney implanted as an agent to help destabilize the Kingdom of Lucifenia. In EC 490, the Marlon king died and Queen Prim attempted to systematically eradicate all of her husband's concubines and their children that posed a threat to her son's legitimacy as heir. With a massive power vacuum in place, Kyle finally ascended to the throne in EC 494.[9]

In EC 500, Kyle rejected his betrothal to Riliane in favor of a green-haired maid he met at the Freezis Mansion.[10] After the death of his beloved during the Green Hunting,[11] Kyle secretly backed the Lucifenian Resistance and helped support the ensuing rebellion against Princess Riliane's tyranny.[12] Following the public execution of The Daughter of Evil on December 26 of that year,[13] King Kyle occupied Lucifenia and rapidly expanded Marlon's power in the Evillious mainland, annexing the country's territory early the next year.[14]

In EC 505, Kyle declared war on the Beelzenian Empire before agreeing to an armistice several months later, entering a civil war with his mother a few weeks after. Queen Prim was later fatally stabbed in the chest by Ney in a mad outburst whilst conversing with Kyle at Castle Hedgehog. After being captured, Ney was mortally stabbed in the chest by Abyss I.R. at Lioness Castle.[9] King Kyle later abdicated in EC 510, placing his half-brother Arkatoir on the throne. Becoming a painter,[15] he sired at least one child.

After the Freezis Foundation discovered Maistia in EC 592, the royal family supported establishing colonies for trade with the foreign continent,[16] sponsoring the Foundation.[17] In EC 597, Kyle's descendant Bruno Marlon was killed by Kaidor Blankenheim while visiting Lucifenia, assuming his identity.[18] After the death of Marquis Kaspar Blankenheim on August 31, EC 609, the royal family met with Elphegortean and Lucifenian officials and issued a joint statement to limit the abuse of tobacco from the New World on September 6, facing opposition from the Foundation and the aristocracy.[16] On September 28, the royal family's heir-apparent attended the marquis' funeral in Toragay.[19]

The royal family waged war against Maistia when the Blue Country's colonies rebelled in EC 760, gradually losing power until Maistia's independence was recognized and hostilities ceased in EC 776. After a civil war broke out with the Viwirtz Family, the Marlons were deposed and demoted to noble status in EC 777, though remaining influential in politics.[20] After marrying into the family,[21] Perrié Cutie Marlon traveled to Jakoku in EC 852 with a Maistian fleet and forced its government to end its isolationism.[20] Sometime after, her son Penry established the USE Dark Star Bureau.[22]

At some point, Penry's son failed in his gold excavation in Maistia, using up a large amount of the family's fortune.[22] Penry's grandson, Gandalf, became a judge for the Dark Star Bureau. He later sired a son, Gallerian, in EC 944. During the early EC 960s, Gallerian entered a relationship with Mira Yarera and sired a daughter, Michelle.[23] Afterwards, Gallerian married Mira and became the director of the Dark Star Bureau. In EC 978, the judge's wife and daughter were killed when their ship, the Titanis, was sunk by a giant ziz tiama.[24] In EC 980, Gallerian began collecting the vessels of sin. The corrupt judge was later killed by Nemesis Sudou during the Leviantan Civil War in August of EC 983.[25]

After the destruction of the Third Period, all the dead members of the Marlon family residing in the Heavenly Yard were dragged back down to the earth as the ground world merged with the Hellish Yard.[26]