Start a Wiki
Marlon Castle[1] was the residence of the Marlon Royal Family in Bariti, located along the western bank of the Meshisu River. The royal palace functioned as the center of political power in the Kingdom of Marlon and a critical defensive point against the country of Lioness for many centuries.

Following the foundation of the Kingdom of Marlon, the castle was built as the abode for the Marlon Royal Family around the middle of the first century EC in response to attacks from barbarians.[2] As the years progressed, the castle was built up as a fortress to protect against invaders from Lioness as the two nations constantly warred for control of the Marlon Island.[3]

Following the death of the previous Marlon King, Prince Martius of Beelzenia, ascended the throne with his wife, Princess Yufina, as Queen. Around March, EC 136, the royal family departed the castle for Beelzenia. With Yufina's disappearance, King Martius returned alone.[4] After the assassination of Duke Sateriasis Venomania by Count Karchess Crim in EC 137, the palace labeled Crim as a criminal and hunted for him after he eloped with Queen Yufina and went into hiding.

Around EC 139, the fugitive Karchess successfully overthrew Martius and his regime, installing Yufina, his wife, as part of a "legitimate" Marlon government.[5] The royal family continued to use the castle throughout the following centuries. While again warring with Lioness, King Charon invited his youngest son's betrothed, Banica Conchita, and her escorts into the palace around February of EC 312. Shortly after, the marriage was dissolved in light of Banica's disgusting eating habits and she was sent back home to Beelzenia.[6]

During the fifth century EC, the Queen of Marlon died, leaving her husband wracked with grief. Later on, he married Prim Rogzé from the Kingdom of Lucifenia and they sired a son, Kyle, in EC 474.[7] As the Prince grew up and pursued an art career, he turned a portion of the castle into his studio.[8] In EC 482, Prim took leave from public service at the palace to undergo childbirth. After her apparent stillbirth, she returned to her royal duties.[9] Around EC 488, a politician and his wife entered open debates with the royal family over their policies.

In EC 489, the couple was arrested and later coerced into committing suicide.[10] At some point, Queen Anne visited the castle to discuss an arranged marriage between her daughter, Princess Riliane, and Prince Kyle and the royal families consent to the betrothal.[11] Sometime afterward, the Marlon King died and his body was buried in Left Chapel.[12] Soon after, Prim eradicated all her political dissenters and the other potential heirs; as a result, Kyle was crowned King in EC 494.[13]

In EC 500, Prime Minister Minis from the Kingdom of Lucifenia journeyed to the palace in response to Marlon's aid with the nation's famine. The ambassador met with King Kyle and Queen Dowager Prim and the parties exchanged gifts. Kyle then informed the minister that he intended to break off his engagement with Princess Riliane in favor of a green-haired maiden from Elphegort, handing him an official letter, and the meeting adjourned.[14] When Kyle later attempted to leave for his beloved, Prim imprisoned her son at the palace under house arrest to delay his departure.[15] After the Lucifenian Revolution, Kyle transferred governance of the Marlon Island to his mother while he governed the newly annexed Lucifenia.[16]

In EC 505, Prim took leave from the palace for the royal villa, Castle Hedgehog.[17] Sometime after Abyss I.R. was discovered dead and buried in Left Chapel. Afterward, King Kyle returned to Marlon and, wishing to confirm Abyss' death, was taken to the crypt and shown the body.[18] Kyle later met with Keel Freezis, his son Shaw, and their servant Gerda in Right Palace. Per the King's request, parliamentary secretary Arkatoir gave Gerda and Shaw a tour of the palace while Kyle and Keel discussed the dead soldier threat in the Blood Pool Region and Prim's sudden departure.

Kyle then organized an invasion of the Blood Pool Region at Middle Tower, planning to combat the dead soldier threat and confront his mother.[19] With about 4200 troops, the King departed from the castle a few days later. Two weeks after the ensuing battle, Queen Dowager Prim and Espionage Task Force Commander Ney were buried in Left Chapel.[20]

Around EC 510, after Marlon completely removed its presence from Lucifenia, Kyle abdicated from the throne and crowned Arkatoir in his place.[21] The castle continued to be used by the next two generations of Kings in the royal family.[22]

In EC 998, Marlon Castle was completely decimated by Punishment. Following the end of the Third Period, the destruction site merged with the Hellish Yard along with the rest of the ground world.[23]

The garden surrounding the palace's three main buildings. It had less space devoted to flora and other luxuries than the Lucifenian Royal Palace but emphasized convenience in turn. The space was surrounded by high walls, making it some of the strongest defensive points in the Evillious region during its time.[24]

A u-shaped building located on the eastern side of the estate. It was open to outsiders, having an audience room, a hall for dinner parties, a guest room, and more. The interior was made very luxurious compared to the other buildings;[25] during her lifetime, it was decorated with Queen Dowager Prim's Gine Doll collection. It had also been decorated with many paintings before being removed by King Kyle, leaving only his father's portrait hanging in the audience room.[26]

The building located at the center of the estate, surrounded by greenery. The tower was where the King and his ministers conducted official business and handled the day-to-day affairs regarding Marlon. It was also where the Marlon parliament convened and conducted business at. From the top of the tower, one could see the entirety of Bariti and its greenery.[27]

The building located on the western side of the estate. It was a chapel used for funeral services of the previous royalty, and where the cemetery for them, their families, and their dead vassals was located. Because they were burials following Levin tradition, the corpses were encased in stone coffins before being buried. Each grave held a marker indicating who was buried there.[28]

The jail located underneath the castle grounds. It was used to detain criminals and political prisoners that were deemed a threat to the security or interests of the Marlon Royal Family. It kept its cells well-guarded.[29] 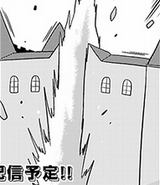 Retrieved from "https://theevilliouschronicles.fandom.com/wiki/Marlon_Castle?oldid=125000"
Community content is available under CC-BY-SA unless otherwise noted.